Before Stonewall: Secret scrapbooks uncover how gay people were criminalised 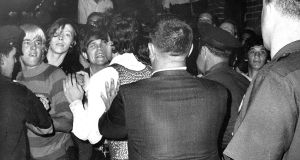 This weekend marks the 50th Anniversary of the Stonewall uprising, a series of protests by group of queer patrons at the Stonewall Inn bar in Greenwich Village, New York, against a police raid. While protests by queer citizens had been happening before 1969, this event has long been considered the start of the contemporary civil rights movement for LGBTQ rights, sparking decades of social and legal changes in the lives of queer people.

In his new book, Indecent Advances: A Hidden History of True Crime and Prejudice Before Stonewall, James Polchin looks at the 50 years before the Stonewall protests, to uncover how queer people were criminalised, in the press, on the streets, and in the courtrooms in the US.

In this exclusive edited excerpt from the book, Polchin details how true crime stories were vital to the history of queer life in the decades before Stonewall.

In the summer of 1952, James Ernest Thompson, a 23-year-old African American man, was on trial for the murder of Wilson Smith, a white resident of the tiny tidewater town of Heathsville, in the southern state of Virginia. The Richmond News Leader reported that Thompson, a native of Philadelphia, took the witness stand in his own defence, claiming, “he had never intended to kill Smith, nor to harm him seriously; his only purpose in fighting with the man was to defend himself against homosexual advances made by Smith”. In a later report, the newspaper called it an “act of sexual perversion against him”.

According to reports, Wilson picked up Thompson, who was hitchhiking from Richmond. In the car Thompson rebuked Wilson several times, eventually getting into the backseat of the car, where he “dozed off,” only to be awakened by Smith, who had parked the car and was “partly undressed”. According to Thompson, the two men fought, and Thompson hit Smith with “his fists, ‘kneed’ him, kicked him, and later struck him over the head with a large stick”. After the attack, and as Smith lay motionless along the roadside, Thompson took his car back to Richmond and returned to Philadelphia on the train. When the prosecution questioned Thompson about why he didn’t report what had happened at the time, he replied: “They would have hung me before I finished telling. Nobody would have believed that about Wilson.”

Thompson’s assumptions proved true. The Richmond News Leader recounted how the state presented more than 20 witnesses, many of whom testified to Wilson’s character. Thompson’s court-appointed lawyers called two local residents to attest to Smith’s “alleged reputation in the community for perversion”. One witness related that on two occasions, “15 to 20 years ago”. Smith had made “unnatural advances” toward him. Another witness testified that Smith had a “reputation of being homosexually inclined when he had been drinking heavily”, but added “he had never seen anything to indicate that the reputation was deserved.” The jury sentenced Thompson to 60 years in jail.

News accounts of Thompson’s trial were pasted on manila pages of large scrapbooks composed by the modernist writer, critic, and photographer Carl Van Vechten in the mid-1950s. Van Vechten was an avid collector of books, classical and jazz music, and cultural ephemera.

Between the 1930s and the 1950s he amassed a large archive of postcards, photographs, drag ball advertisements, and news and magazine clippings that documented a range of queer experiences in the decades before Stonewall. The child of immigrants, Van Vechten grew up in Cedar Rapids, Iowa, and moved to New York City just after the turn of the 20th century. Living in bohemian circles in New York and Paris, he travelled throughout Europe writing about Modernist art and theatre of the early 20th century. But he also had a talent for disrupting the lines between high and low art, investing the quotidian, the odd, and the marginal with artistic potential.

An early admirer and promoter of Harlem artists and writers in the 1920s, Van Vechten often brought groups of his mostly white bohemian friends on tours of Harlem nightlife, showing them the experience of dance halls and jazz clubs. In turn, he brought his friends from Harlem down to Greenwich Village to the salons and cafés of bohemia at a time when such racial crossing in the US were dangerous – even among bohemian circles.

Van Vechten married twice; his second marriage, to the Russian actress Fania Marinoff, lasted 50 years, until his death in 1964. But his homosexuality was an open secret throughout much of his life. A white man who is best known for promoting black writers and artists, and a married man who enjoyed homosexual affairs throughout his life, Van Vechten used his own sexual and cultural crossings for aesthetic purposes. As one biographer described him, Van Vechten was “a modernist pioneer . . . and a prophet of a new cultural sensibility that promoted the primacy of the individual, sexual freedom, and racial tolerance and dared put the blues on par with Beethoven.”

By the 1930s, Van Vechten took up photography, creating studio portraits of the era’s artists, writers, and socialites. He also began experimenting with homoerotic and male nude images of the many young men in his artistic circles during the era. These photographs, which fill many pages of his scrapbooks now housed at Yale University, show both the more flirtatious and often campy posing of erotica.

Nowhere is this camp sensibility more evident than in the scrapbook collages – made from newspaper and magazine headlines and images. They also included the ephemera of queer life of the decades before Stonewall such as drag ball fliers and advertisements for queer novels. These collages recast the popular press with homosexual innuendo.

“Van Vechten appears to have been scanning the newspapers looking not only for the public naming of homosexuality,” writes art historian Jonathan Weinberg, “but for the way in which same-sex love can only be deduced by reading between the lines.”

Mixed with such collages, Van Vechten also pasted crime articles of assaults and murders of queer men. The inclusion of these queer true crime stories, both large and small, suggests how crucial they were to the queer history that he was recording and preserving. While we may understand these scrapbooks as Van Vechten composing an unofficial history of queer life in midcentury America, the articles of men murdered and assaulted haunt this history as much as they illuminate it.

We find in the scrapbooks both small crimes and sensational headlines. Sensationalised accounts of the murder of a Nazi diplomat in his Brooklyn home in 1939 by a young boxer companion; the Riverside Park stabbing of David Kammerer by the university student Lucien Carr in 1944 (a crime that eventually drew in the likes of writers Jack Kerouac and Allen Ginsberg); and the gruesome 1945 murder and mutilation of Solon Burt Harger by his boyfriend Walter Dahl in the Manhattan apartment the two men shared. Dahl hacked his companion into parts and dropped them into the New York bay off the Staten Island ferry.

The crimes that fill Van Vechten’s scrapbooks come together to tell a story about the marginal in society. In mixing the public ephemera of the newspapers with his own private photographs, drawings of naked men, and published accounts of queer crimes, Van Vechten’s scrapbooks illustrate how these crime stories blurred the lines between personal desires and public life, and between crime story and queer experience. While the campy collages in the scrapbooks show what one Van Vechten biographer calls a playful and ironic sensibility about his homosexuality, the queer true crime newspaper clippings of assault, strangulation, and mutilation reflect a darker and insensitive reality.

On his death in 1964, five years before the Stonewall bar would erupt in protest against a violent police raid and set in motion the modern gay rights movement, Van Vechten had the scrapbooks donated to Yale University, directing they be sealed for 30 years. It was a prediction, and a hope, that such work would be better understood and appreciated well beyond the Cold War moralities.

In composing these scrapbooks amid the fears, harassment, and homophobic rhetoric of the 1950s, Van Vechten saw in the crime articles as both a collective history of queer experience and a documentation of suffering that needed to be preserved.

James Polchin is a writer, cultural historian, and a clinical professor at New York University. He is the author of Indecent Advances: The Hidden History of True Crime and Prejudice Before Stonewall (Icon Books).