Beatlebone by Kevin Barry: profound, funny, hard to pin down

Book review by Eoin McNamee: Imagine if John Lennon had returned to Dorinish, the Co Mayo island he owned 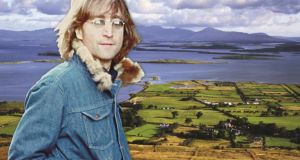 In 1967 John Lennon bought Dorinish island, in Clew Bay, for the knockdown price of £1,550. His next steps were a typical Lennon mix of practicality and whimsy, on the one hand floating a painted gypsy wagon out to the island, on the other applying to Mayo County Council for permission to build a house. The project petered out. The planning permission lapsed and the retreating tide of psychedelia left the self-sufficiency pioneer Sid Rawle, the King of the Hippies, just about in control of the island until fire and storm drive him ashore.

In Kevin Barry’s superb novel it is 1978 and Lennon is back in Clew Bay. He’s on a mission not entirely rational, not entirely sane. He wants to spend three days on his island getting under his own skin. But the strange airs of the west coast need to be negotiated. In Robinson Jeffers’s words, beauty is not always lovely. A spirit guide is needed for the ghosts and shapeshifters, the whirl of terrain and myth. Lennon’s driver, the profane and wily Cornelius O’Grady, appoints himself to the role.

This is stray sod country. There is temporal slippage. The roads double back on themselves. The psychic wayposts are dank hotels in Newport and Mulrany, the Highwood bar and the Amethyst hotel. Cars break down or don’t turn up. Boats spring leaks. Epic drinking sessions convene at midnight. Shamanistic asides are uttered. Ray Lynam sings country on the eight-track and hard-bitten Fleet Street journos comb the country for Lennon. Cornelius keeps Lennon one step ahead of the red-top press, but the island remains just over the horizon.

Cornelius O’Grady, for all his complications, is an easier read. He is no Janov, and there are better ways to get through the doors of perception than battering on them with a bottle of Powers, but sometimes the whiskey is all there is to hand. O’Grady can see what Lennon is up to and is willing to go a few miles of the spiritual road with him. He is a man inclined to bigheartedness under pressure, to be a steadyish hand in times of concern.

Besides, Cornelius knows what Lennon is up against. Many’s the 1960s seeker- after-truth who came to grief when they found themselves up against the perception-distorting light of the western seaboard. All that is left of the Diggers, Screamers and Ranters are scrawled arcana on mildewed walls, the high-tide mark of idealism gone sour. For those that remain danger lurks. “People go strange out here, John. You wouldn’t be the first and you wouldn’t be the last.”

Barry’s pages are laid out in unindented paragraphs, double spaced, with minimal punctuation. It’s a spare and elegant technique that brings structural rigour to the book. The complexity and beauty of the language are counterpointed and boundaried by the honed-down structure.

The author describes the genesis of the novel. Something of Lennon himself. The author’s intention to find his John Lennon book not in the singer’s public record but in the place itself. To work backwards from Clew Bay, Achill, Dorinish. But there is a disturbing undertow, deep stirrings, and the author has no Cornelius to guide him. He spends a day and a half on Dorinish. No more. I was removed from Dorinish in a state of distress.

Then we’re back to Cornelius and John. Two men in a boat, all at sea in Clew Bay, and Cornelius is getting down to the nub of things. The possessed fields. His own lost father. It’s a place for confession and revelation. Cornelius has brushed up against other worlds. A portal opened on the way home from a disco in Castlebar, but it is the primal longing for love that wounds, the child abandoned that causes tears.

In the end Cornelius is at home with mystery in the fields of Co Mayo, and Lennon needs to find it in his own world. Each to his own. John is a Liverpool boy, and his mystery lies on the rain-dampened streets of Bootle, 17 years old and looking dapper. The world is yours to own, and you’re ready to back some ethereal local girl up against a tree in Sefton Park, some soft, blue-veined Julia of past longing. And that sweet night is something that all the screaming in the world won’t bring you back to.

It’s an encounter with a hare that fixes Lennon’s journey west. The realisation that the mystic is sinewy, elusive, self-contained. To be encountered but not to be held. The final chapters bring him back to the studio, trying to string occult sounds together. He is focused on Beatlebone, the album that will never be. The Russian composer Sofia Gubaidulina talked about imagining sounds that have never existed. Lennon runs up against the barriers of creation, but he is his best and wryest self when he applies himself to the nuts and bolts of his craft.

Beatlebone is a novel of necessary invention: profound, funny, hard to pin down. The demanding spirit of Dermot Healy is abroad in these pages, but the execution is all Barry’s own. He doesn’t fail. As Cornelius says of Ray Lynam, he holds the note. He wouldn’t be found looking for it.

Eoin McNamee’s latest novel, Blue Is the Night, is published by Faber & Faber. He is writer-in-residence at Maynooth University