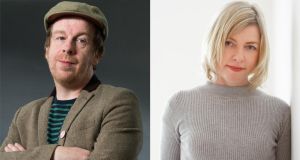 Six Irish writers are among the 18 authors on the longlist for this year’s Sunday Times Audible Short Story Award, whose £30,000 (€33,500) prize is the biggest for a single short story in English.

The settings of the longlisted stories span the 2003 Iraq War, an apartment block in Manhattan, family holidays on the coast of Italy and Ireland, 1970s England, and Christmas in California.

This year’s contest had a record 950 eligible entries. As with the overall list, the Irish nominees are a mix of high-profile and less well-known writers.

Danielle McLaughlin has been nominated for her story A Partial List of the Saved, which appeared in the anthology Being Various. The former solicitor from Co Cork won the 2018 Windham Campbell Prize, as well as the William Trevor/Elizabeth Bowen International Short Story Competition, among other awards. Her debut collection of short stories was Dinosaurs on Other Planets; her first novel, A Retrospective, will be published in 2020.

Kevin Barry has been nominated for The Coast of Leitrim, which appeared in the New Yorker magazine. Barry, whose new novel, Night Boat to Tangier, has just been published, won the award in 2012, with Beer Trip to Llandudno. Author of the novels Beatlebone and City of Bohane and the story collections Dark Lies the Island and There Are Little Kingdoms, he has also won the Impac Dublin Literary Award, among others.

Louise Kennedy, who lives in Sligo, has been nominated for In Silhouette, which appeared in the Tangerine. A PhD candidate at the Seamus Heaney centre at Queen’s University Belfast, she has won the Ambit Short Fiction, Wasifiri New Writing, John O’Connor and Listowel Los-Gatos prizes.

Wendy Erskine, a secondary-school teacher in Belfast, has been nominated for Inakeen. Her debut short-story collection, Sweet Home, was shortlisted for the Republic of Consciousness Prize and longlisted for the Gordon Burn Prize and the Edge Hill Short Story Prize.

Caoilinn Hughes has been nominated for Prime, which appeared in Granta. Her debut novel, Orchid and the Wasp, is shortlisted for the Hearst Big Book Awards, was a finalist for the Butler Literary Award and was longlisted for the Authors’ Club Best First Novel Award. Her poetry collection Gathering Evidence won the Irish Times Strong/Shine Award. For her short fiction, she won the Moth International Short Story Prize 2018 and an O Henry prize in 2019.

Sunday Times Audible Short Story Award, for a piece of up to 6,000 words, is open to any novelist or short-story writer from around the world who has been published in the UK or Ireland. Audible, whose first year this is as the award’s sponsor, will produce an audio anthology of the shortlisted stories.