Translations from Spanish, German, Dutch, Farsi and Japanese up for £50,000 prize 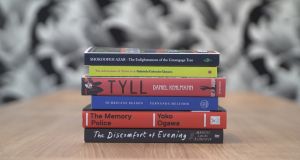 The six titles on the 2020 International Booker Prize shortlist

The six books shortlisted for this year’s International Booker Prize, which celebrates the finest translated fiction from around the world, has just been announced digitally for the first time.

Three of the novels, The Enlightenment of the Greengage Tree by Shokoofeh Azar, The Adventures of China Iron by Gabriela Cabezón Cámara and Tyll by Daniel Kehlmann have been inspired by their nations’ histories – namely the 1979 Islamic Revolution in Iran, gaucho culture in 1870s Argentina and the Thirty Years’ War in Germany. Each borrows existing myths, legends and origin stories but reinterprets these tales with modern sensibilities, celebrating the pursuit of intellectual freedom, the exploration of sexual identity and survival in the face of political unrest and sweeping illness.

The other three shortlisted titles, Hurricane Season by Fernanda Melchor, The Memory Police by Yoko Ogawa and The Discomfort of Evening by Marieke Lucas Rijneveld all touch on how trauma, whether through violent acts or emotional loss, shape our experiences and approach to the world.

Melchor’s Hurricane Season opens with the gruesome discovery of a murder victim, but the novel’s narrative drive quickly shifts to asking, ‘Why?’ rather than ‘Who?’ and through the characters’ stories we are introduced to a world governed by poverty and violence, misogyny, and prejudice. In The Memory Police, Ogawa explores the power of memory, and how much our memories define us, and the trauma of loss. Loss is also a central theme of Rijneveld’s The Discomfort of Evening, a story that recounts the breakdown of a devout family after the untimely death of one of their children.

Ted Hodgkinson, chair of the judges, said: “Each of our shortlisted books restlessly reinvents received narratives, from foundational myths to family folklore, plunging us into discomforting and elating encounters with selves in a state of transition.

“Whether capturing a deftly imagined dystopia or incandescent flows of language, these are tremendous feats of translation, which in these isolating times, represent the pinnacle of an art-form rooted in dialogue. Our shortlist transcends this unprecedented moment, immersing us in expansively imagined lives that hold enduring fascination.”

The International Booker Prize is awarded every year for a single book that is translated into English and published in the UK or Ireland. It aims to encourage more publishing and reading of quality fiction from all over the world and to promote the work of translators. Both novels and short-story collections are eligible. The winner will be announced on May 19th. The contribution of both author and translator is given equal recognition, with the £50,000 prize split between them. Each shortlisted author and translator will receive £1,000, bringing the total value of the prize to £62,000. This year the judges considered 124 books. Last year’s winner was Celestial Bodies by the Omani writer Jokha Alharthi, translated from Arabic by Marilyn Booth.

The Enlightenment of the Greengage Tree by Shokoofeh Azar, translated by Anonymous from Farsi ( Europa Editions)
Irish Times review
The judges said: “A wild, humorous revisitation of Persian myths and fables, filled with brutal scenes of contemporary life. A ghostly portrait of a family caught in the abject violence of political unrest.”

Shokoofeh Azar was born in Tehran, Iran, in 1972. She moved to Australia as a political refugee in 2011. She is the author of essays, articles and children’s books, and is the first Iranian woman to hitchhike the entire length of the Silk Road. The Enlightenment of the Greengage Tree, originally written in Farsi, was shortlisted for the Stella Prize for Fiction in Australia and is Azar’s first novel to be translated into English.

The Adventures of China Iron by Gabriela Cabezón Cámara, translated by Iona Macintyre and Fiona Mackintosh from Spanish (Charco Press)
Irish Times review
The judges said: “A feminist reading of 19th-century foundational myths, the brutality and beauty of rediscovering an already devastated world. This must have posed an enormous challenge to the translators, one they have faced with inventiveness and poise.”

Gabriela Cabezón Cámara was born in Buenos Aires in 1968. She is one of the leading figures in Argentinian and Latin American literature and one of the region’s most prominent feminist intellectuals. In 2011 her novella Le viste la cara a Dios (You’ve Seen God’s Face), later republished as a graphic novel, won the Argentine Senate’s Alfredo Palacios Prize. It was recognised by the Buenos Aires City Council and the Congress of Buenos Aires Province for its social and cultural significance and its vital contribution in the fight against human trafficking. Her debut novel La virgen cabeza (Slum Virgin, Charco Press, 2017) was followed by La Isla de la Luna (2012) (Island of the Moon), and Romance de la negra rubia (2014) (Romance of the Black Blonde) as well as two collections of short stories: Sacrificios (2015) (Sacrifices) and Y su despojo fue una muchedumbre (2015) (Her Waste Became a Crowd). She lives in Buenos Aires.

Tyll by Daniel Kehlmann, translated by Ross Benjamin from German (Quercus)
Irish Times review
The judges said: “This novel travels with the currents of history. In its cycles of brutality and violence, it reaches into our solitude and echoes with the power of rewritten myth.”

Daniel Kehlmann was born in Munich in 1975. His works include Measuring the World, Me & Kaminski and Fame, and have won numerous prizes, including the Candide Prize, the Literature Prize of the Konrad Adenauer Foundation, the Doderer Prize, The Kleist Prize, the WELT Literature Prize and the Thomas Mann Prize. Measuring the World was translated into more than 40 languages and is one of the biggest successes in postwar German literature. Tyll spent a year on the German bestseller lists, selling over 400,000 hardback copies. He lives in Vienna, Berlin and New York.

Ross Benjamin was born in the US in 1981. He is a prizewinning translator and writes literary criticism for The Times Literary Supplement, among other publications. He lives in New York.

Hurricane Season by Fernanda Melchor, translated by Sophie Hughes from Spanish (Fitzcarraldo Editions)
Irish Times review
The judges said: “In a propulsive translation, the eight paragraphs of this novel spiral down through layers of violence, corruption and desire. A novel of hellacious force.”

Fernanda Melchor was born in Veracruz, Mexico, in 1982 and is a writer and journalist who lives and works in Puebla. In 2013 she published a collection of short stories and a novel: Aqui no es Miami and Falsa liebre (both with Almadia), followed by Hurricane Season in 2017.

Sophie Hughes was born in Chertsey, UK, in 1986. She is known for her translations of writers such as Laia Jufresa, Rodrigo Hasbún and José Revueltas. In 2019 she was shortlisted for the Man Booker International Prize for her translation of Alia Trabucco Zerán’s The Remainder. She lives in Birmingham.

The Memory Police by Yoko Ogowa, translated by Stephen Snyder from Japanese (Harvill Secker)
Irish Times review
The judges said: “Originally published in the 1990s, this novel speaks directly to the amnesiac present: a world in which things disappear, then the memory of things themselves, in affectless prose that mirrors this erasure.”

Yoko Ogawa was born in Okayama, Japan, in 1962. She has won every major Japanese literary award. Her fiction has appeared in The New Yorker, A Public Space and Zoetrope. Her works include The Diving Pool, a collection of three novellas, The Housekeeper and the Professor, Hotel Iris and Revenge. She lives in Japan.

Stephen Snyder is a Japanese translator and professor of Japanese studies at Middlebury College, Vermont. He has translated works by Yoko Ogawa, Kenzaburo Oe, Ryu Murakami, and Miri Yu, among others. His translation of Natsuo Kirino’s Out was a finalist for the Edgar Award for best mystery novel in 2004, and his translation of Yoko Ogawa’s Hotel Iris was shortlisted for the Man Asian Literary Prize in 2011.

The Discomfort of Evening by Marieke Lucas Rijneveld, translated by Michele Hutchison from Dutch (Faber & Faber)
Irish Times review
The judges said: “Rijneveld’s language renders the world anew, revealing the shocks and violence of early youth through the prism of a Dutch dairy farm. The strangeness of a child looking at the strangeness of the world.”

Marieke Lucas Rijneveld was born in Nieuwendijk, Netherlands, in 1991 and identifies as male. They grew up in a Reformed farming family in North Brabant before moving to Utrecht. One of the greatest new voices in Dutch literature, their first poetry collection, Calfskin, was awarded the C. Buddingh’ Prize for best poetry debut in 2015. In 2018, Atlas Contact published their first novel, The Discomfort of Evening, which won the prestigious ANV Debut Prize and was a national bestseller. Alongside their writing career, Rijneveld works on a dairy farm. They live in the Netherlands.

Michele Hutchison was born in the UK in 1972. After a stint as an editor, she became a literary translator from Dutch. Her translations include the bestselling An American Princess by Annejet van der Zijl, Mona in Three Acts by Griet op de Beeck and Seaweed by Miek Zwamborn. She is also co-author of The Happiest Kids in the World. She has lived in Amsterdam since 2004.