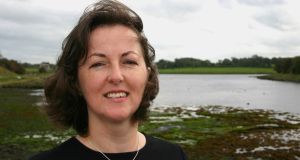 Contemporary-set work based on Irish myth, particularly for young readers, is a tricky business; a great deal of the time it’s penned with the tourist and/or Irish-American market in mind. For the cynical Irish reader, something is bound to go wrong here – whether that’s “high-schoolers” traipsing around Connacht paying in dollars, or some unforgivable misreading of the original tales (even as their differing translations sit side-by-side). The question of “who is this for?” comes up more often than it might otherwise. Is the purpose of this book to get the (implicitly naïve) reader excited about Irish myth – or can it stand alone as a story first and foremost, with another layer accessible to those in the know?

Inspired by tales in the Ulster Cycle, particularly the Cattle Raid of Cooley (the Táin), Marie-Louise Fitzpatrick’s On Midnight Beach (Faber & Faber, £7.99) sets its stall out in a prologue featuring a young boy defeating a terrifying dog by hurling a sliotar down its throat. The resonances are obvious for those who’ve been through the Irish educational system and its fondness for Cú Chulainn, ‘Dog’ Cullen in this text, but it’s also gripping in its own right.

Fitzpatrick, who is best known for her award-winning picture books but has also written novels for nine to 12 year olds, depicts one of those life-changing summers that exist only within adolescence, a summer where teenaged Emer finds that in front of Dog, she can’t “walk normally. Placing one foot in front of the other became a strange slow-motion awkwardness of out-of-sync feet, knees, hips.” She loves him deeply, even as she realises he’ll “always belong in the world of men more than he’ll ever belong to me”.

The novel is set in that unusually-hot summer of 1976, and at times it’s eerie how easily grand mythic battles map onto 20th-century community rivalries and the particular codes of behaviour in adolescent fights. This gripping retelling is both personal and grand, a private coming-of-age set against a backdrop of a community forever changed. I adored it.

Elsewhere in the country, in Limerick and Lahinch in 2019, Matt is having a memorable summer of his own - an older brother who’s clearly in trouble with drug dealers, a Da now as devoted to his AA meetings and marathons as he used to be to the drink, and worst of all, a mam who’s swanned back into his life after years of no contact.

Helena Close’s The Gone Book (Little Island, £7.99) is named after the diary Matt keeps after his mother leaves, a series of letters to the woman he both hates and loves. He wishes desperately she’d done something better than just walk out: “why the f**k couldn’t you have been noble and just got cancer and died?”

Despite the semi-comic tone, there’s a sense of impending doom throughout, and it plays out as expected, though still upsettingly. The dark grittiness here echoes Close’s earlier work about - if not necessarily aimed at - teens.

In another time and place entirely, Matt Killeen’s Devil Darling Spy (Usborne, £7.99) revisits his second World War spy-heroine Sarah, prepared to play “The Nazi Shirley Temple” if it suits her purposes. West Africa in the early 1940s is still a place of colonial conquest; her journey here is in part one of learning about how “all of white history is a series of mass graves.”

At the same time she is on the track of a potent virus - a plotline now difficult to read - and en route to making decisions that will change her forever. This is a war novel where the emotional, moral, ethical stakes are brought to the fore and matter greatly; it’s also an utterly entrancing read.

American cartoonist Rob Harrell has written a novel based on his own experiences of eye cancer in Wink (Hot Key Books, £7.99), a magnificent diary-style account of what it means to be different and sick. Protagonist Ross explores not what just what it means to encounter the sheer terror of being ill, and waiting for the “big epiphany” cancer patients should have, but the smaller, yet just-as-vital cringe moments of letting a clump of hair fall out on the pizza of the girl you have a crush on.

This is a remarkable book that notes the difference between the popular “hero battling” narrative of cancer and the reality in subtle ways, particularly in the comics the protagonist draws.

“It’s not the outside that bothers me . . . I worry that he’ll judge me by my invisible broken places if he sees them, by the cracks and fissures that skitter across the surface of my mind, by the scars that have hardened over them.” Maggie Harcourt’s fourth novel, The Pieces of Ourselves (Usborne, £7.99), introduces us to Flora, a girl still “treading water” after the public and embarrassing breakdown that marked the beginning of a manic episode. The diagnosis of bipolar II has left her afraid of trusting her own brain – is that “bright, fizzing swirl” she feels about a boy attraction, or a sign of an impending relapse?

Harcourt treats mental illness with sensitivity, careful to offer hope for her readers while also being realistic about the still-pervasive stigma; not one of Flora’s school friends has stayed in touch, and her own mother is off the scene. Alongside this there’s a satisfying love story, or rather pair of love stories; a guest at the hotel Flora works at is searching for a figure from his family’s history, and together they uncover a World War I romance as their own relationship blossoms. If it all gets a little implausible by the end, it’s forgivable; it’s difficult to roll your eyes while also dabbing the tears away.

Finding the Way Back: A career-best performance from Ben Affleck
4