The Discomfort of Evening: ‘Grotesque characters written about grotesquely’ 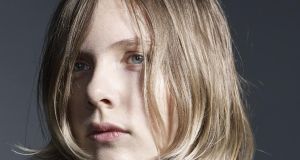 Marieke Lucas Rijneveld: Her debut novel was a runaway bestseller on its release in Dutch in 2018.

Book Title:
The Discomfort of Evening

There is a specific type of novel that I know I could never get my mother to read. For example, in lieu of a Sacred Heart above my kitchen door I have a glossy headshot of Ottessa Moshfegh – framed and lit by a small red bulb. In times of great stress, I pray to Her for guidance. But goodness knows I could never successfully convince my mother to read My Year of Rest and Relaxation. So, when I began reading Marieke Lucas Rijneveld’s debut novel, The Discomfort of Evening, and came across the line: “I watched as the diarrhoea splattered on to the grass like the caramel sauce my granny poured on to the rice pudding”, I knew I had a tough sell on my hands.

Rijneveld relishes in these abject similes which they use to convey the disturbed mind of their narrator Jas, a young girl living on a rural farm in the Netherlands with her devoutly religious family. The novel begins with the death of Matthies, her older brother, after he falls through a frozen lake. Unable to understand or deal with her own grief, Jas begins to experience deeply horrifying thoughts and fantasies that warp and distort her reality.

A runaway bestseller on its release in Dutch in 2018 and now one of the 13 novels longlisted for the International Booker, the novel made a superstar of Rijneveld (28) in their native Netherlands. The book was even big enough to warrant the middle-aged male writer Gerbrand Bakker to pen a deeply intellectual think piece in the national Dutch newspaper Trouw about how the novel is bad, actually. Thankfully the opinions of ageing male novelists rarely matter.

The Discomfort of Evening works best when it acts as a study on the manifestations of grief. Early on Jas discovers that in order to prevent post-mortem evacuations, cotton wool has been used to plug her dead brother’s anus. Shortly after this, Jas herself becomes severely constipated, as if she were trying to mimic her brother’s corpse. Her constipation, whether self-inflicted or not, is the most painful and physical manifestation of her grief and leads to one of the novel’s most jarring scenes as her father spreads her cheeks and shoves chunks of green soap into her rectum as an apparent tried and tested form of constipation relief.

As time amasses after her brother’s death, her fantasies become pitch black as we, the reader, begin to struggle to decipher if what we are reading is reality or nightmare.

When the infamous 2001 outbreak of foot-and-mouth disease arrives on the family farm it only further fuels the Hieronymus Bosch-like imagery that plagues her mind. In many aspects, Jas finds her closest comparison in Benny, the disturbed child protagonist of Michael Haneke’s 1992 film Benny’s Video. Both are works which require a certain level of willpower from their audiences as their protagonists fantasise about the brutal misuses of farm machinery.

Yet while the novel succeeds as an unsettling exploration of a family dealing with a sudden death, as the novel progresses it tends to lose its narrative thread and becomes unintentionally episodic. Some could argue that Rijneveld’s decision to tell the story as if we are in the mind of a disturbed young girl pardons this lack of cohesiveness, but often the novel reads like Rijneveld is more interested in creating more and more disturbing fantasies instead of actually focusing on what makes this novel interesting. But overall, this isn’t enough of a complaint to deem the novel unsuccessful.

It also doesn’t come as surprising that a novel like The Discomfort of Evening has appeared at this specific moment in literature. Recently there has been a trend for novels and stories that focus on, to put it plainly, grotesque characters written about grotesquely. Perhaps the urtext of this trend is Moshfegh’s Eileen, the story of a woman who stores her own piss in jars who we somehow end up loving. Another work is Kristen Roupenian’s insanely viral short story Cat Person which describes, in stomach-churning prose, a hook-up from hell. I feel The Discomfort of Evening sits proudly among this subgenre, a sort of abject fiction, all being produced by a group of young writers who, when they mention to the Good Book, are actually referring to Powers of Horror by Julia Kristeva.

Despite some issues, The Discomfort of Evening is a strong debut. Rijneveld’s poetic prose, eloquently translated by Michele Hutchison, clashes and rattles against the horrors it describes, a constant fight between terror and beauty. It is a novel that does its best to make sure you won’t forget it anytime soon. Something I know my mother will absolutely never read.