Books in brief: profound Japanese novel The Memory Police and Joyce Carol Oates at her finest 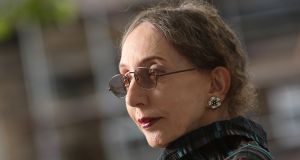 Joyce Carol Oates: balances a sense of malevolence and suspense with a deep understanding of the complexities of friendship and family dynamics. Photograph: Jeremy Sutton-Hibbert/Getty

My Life as a Rat
By Joyce Carol Oates
Fourth Estate, £12.99
“Once I’d been Daddy’s favourite of his seven kids. Before something terrible happened between us, I am trying still to make right.” Twelve-year-old Violet Rue Kerrigan has uncovered an appalling crime, and is torn between her sense of justice and loyalty to her family. This novel, Oates at her finest, balances a sense of malevolence and suspense with a deep understanding of the complexities of friendship and family dynamics, reminiscent of The Secret History. It asks questions about truth, confession and the price of moral integrity, facing issues of racism and misogyny head on. It’s a sharp, fast-paced novel, wry and detached yet emotionally astute. Audiobook also recommended. – Ruth McKee

Organic Words
By Hugh McFadden
Limerick Writers’ Centre, €25
Hugh McFadden is a journalist, poet and literary critic, and this collection of essays, articles and reviews from various publications spans 50 years. Understandably in the case of a poet, many of the reviews are related to poets – either books about them or collections published by them. So Patrick Kavanagh, Pearse Hutchinson, Austin Clarke, Thomas Kinsella, Paul Durcan, John Montague, Michael Longley, Ciarán Carson, Allen Ginsberg and Anna Akhmatova are among those featured. Also understandably in a collection spanning so long a period, there are many reminiscences. Some moving memorial pieces are included, especially on John Jordan – to whom McFadden was very close and whose literary executor he became – Michael Hartnett and Patrick Kavanagh. The section Joyce, Beckett and Flann has articles on Bloomsday and reviews of books on the three writers. The reviews of the three volumes of The Letters of Samuel Beckett are particularly interesting. Histories of St Patrick’s Cathedral, Dr Steeven’s Hospital and Newgrange are also reviewed in this eclectic collection, and McFadden’s reminiscences of his time in the Irish Press makes for an enjoyable trip down memory lane. – Brian Maye

Bookends
By Michael Chabon
HarperCollins, €15.40
This collection of introductions and afterwords gives us an insight into Michael Chabon’s literary origins and influences. Introductions may be “explanatory, apologetic, triumphal, tendentious, rueful, score-settling, spiteful, bibliographic, theoretical or gently embarrassed”, he writes, but the best of them are what he’d call “restorative” and the main motivation for those he’s written is “a hope of bringing pleasure to the reader”. They show his tastes to be diverse, covering adventure, science fiction, ghost stories and comics as well as his own books. He is convinced that MR James’s ghost story Oh, Whistle, and I’ll Come to You, My Lad is “one of the finest short stories ever written” and tells us that Ray Bradbury’s story, The Rocket Man, which he read when he was 10, was “the most important short story in my life as a writer”. He reflects thoughtfully on his own writing approach and style. His range of interests is more likely to appeal to fans of his own work, and while it’s difficult to get a grasp of books one has probably never read, this is an accessible compilation. – Brian Maye

Still Worlds Turning
Edited by Emma Warnock
No Alibis Press, £14.99
Spicy and zany are two adjectives that come to mind after reading No Alibis Press’s first collection of short stories. The wildly changing interior and exterior worlds that many of these stories paint are tastefully arranged with underlying themes of dissatisfaction, ambivalence towards modern technology and discordant relationships. Strong characters permeate the collection: a stolen tiger and a deeply suspicious mother who prowls the apartment in search of a silent killer are each conjured up in fewer than 20 pages, and yet their resonance hums long after the “pretend end”, as June Caldwell writes in the introduction. Twenty emerging and established writers feature in this collection, and the majority sit comfortably apart from any predictable plot or form. To be read slowly and thoughtfully. – Mia Colleran

The Memory Police
By Yoko Ogawa, translated from the Japanese by Stephen Snyder
Harvill Secker, £12.99
Poetic and profound, this newly translated novel from one of Japan’s most highly regarded authors is nothing short of wonderful. In a dystopian future, The Memory Police patrol an unnamed island, kidnapping anyone who fails to “forget” the things that disappear. One day all the birds disappear, another day all libraries disappear and so on. The main character, an author, lives a quiet existence until her editor’s life is threatened. As time passes, more and more things are forgotten and the islanders begin to fear that humans themselves will become forgotten, and thus disappear. The pacing of this novel is masterful; the cast of characters is well-painted though sparse and it is hard to miss the unsettling allegory at the heart of the text. – Mia Colleran

Knockfane
By Homan Potterton
Merrion Press, €16.95
The publication of Knockfane marks the literary debut of Homan Potterton, former director of the National Gallery of Ireland. When Willis Esdaile dies, having banished his only son and heir, it falls to his daughters, Julia and Lydia, to secure his legacy for future generations. Gentler than the acerbic surrealism of Elizabeth Bowen’s work, Potterton presents an intimate family drama deeply rooted in the routines and customs of life in Ireland in the mid-20th century. Evocative of a bygone era, Potteron’s narrative uses the Big House genre to remind his reader not only of what Ireland once was but of how much has changed since places such as Knockfane were lost. – Becky Long