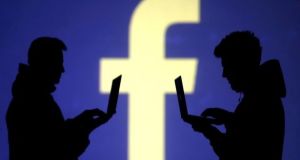 Nearly 900 paid-for advertisements relating to the referendum on the Eighth Amendment, including some paid for by overseas groups, have been captured by transparency researchers in the run-up to the vote on May 25th.

Ads from both sides of the campaign are still appearing online, despite Facebook’s announcement earlier this month of a ban on foreign-funded ads relating to the abortion referendum.

Google followed within days with a total ban on ads related to the referendum.

Data captured by the browsers of about 600 volunteers around the country now includes 224 unique advertiser pages relating to the campaign. Some 43 per cent of the advertisers are registered with, or affiliated with the Standards in Public Office Commission (Sipo), while 57 per cent were in no way affiliated with that body. Both sides of the campaign were spending on Facebook ads, with an increase in the final weeks.

The researchers said some groups were untraceable and that the location, identity or intent of the person paying was not known. There were also overseas organisations paying for ads targeting Irish voters.

Activity that would be regulated if it happened offline was also seen by the researchers, who found spending by overseas organisations to influence the vote, untraceable advertising with no accountability for misinformation, and spending to get high quality video ads seen by “hundreds of thousands of people”.

TRI founder and transparency specialist Liz Carolan said on Friday the group had spoken to many people to try to figure out how much money was being spent online on the campaigns but said there was “no way of knowing”.

“What we can see though is there is a significant amount of activity. We have no idea of how many ads are circulating in this referendum.”

She noted a lot of the activity on Facebook was linking people to websites which had the capability to gather a lot of information about undecided voters.

This had been seen in other contexts, where the information was cross-populated with other information an organisation had about voters.

This was a “particularly worrying” trend, Ms Carolan said.

She said clips from RTÉ’s Claire Byrne Live debate on Monday were also being used in some paid ads, sometimes taken out of context and not presenting a balance of views.

They were presented almost as “American-style attack ads”, she said.

“Those are racking up, within very short periods of time, tens of thousands of views online.”

Ms Carolan said she believed there was “a need to go back to first principles on our electoral rules and try and build them so they are fit for purpose”.

She said we were at a point before the referendum where there was still time to make sure we were not in the position after it where we were holding parliamentary committees, such as those held in the UK and the US after the Cambridge Analytica scandal.

“I think it’s not an exaggeration to say that when two major multinational corporations for the very first time ever withdraw core products from a market because they say it’s too unregulated to operate in, it’s time for us to have a proper response and to treat that as the kind of regulatory crisis that it is.”

TRI, working with researchers at the Geary Institute at UCD, found there were a number of advertisers which claimed or tried to appear neutral on the referendum, while demonstrating “bias towards or against one of the sides”.

Seven advertisers posting 28 ads which appeared neutral, but which clearly favoured one side, were discovered by the advertisers.