Turnout crucial to outcome of the referendum on the Eighth Amendment 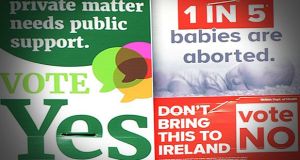 With just days to go, each side holds the same fear: that not enough of its supporters come out on the day.

We’re into the final week of this long and divisive campaign. Just a few days remain until repealers and retainers alike hold their breath and wait for the result of the referendum on the Eighth Amendment.

Both sides have a packed agenda for the week. Public attention, however, will likely focus on the television debates on Tuesday (RTÉ) and Wednesday (TV3).

Canvassing and campaign events will be stepped up by both sides. Most of the posters are printed, and if they’re not up already, they will be soon. There’s not much lamppost space left, while campaigners on both sides sound exhausted.

Remaining budgets for online advertising – not all banned, despite what some people think – will be spent in the final few days, seeking out those elusive undecided voters who could yet have a crucial bearing on the outcome. The spend for online tends to be heavily weighted towards the end of the campaign. If you have a social media feed, chances are you’ll notice it.

Politicians will have a more visible role in the campaign in the coming days. Fine Gael Ministers were out in force in Tullamore yesterday, while Ministers Simon Harris and Regina Doherty are slotted in for the TV debates. Taoiseach Leo Varadkar has a round of interviews while the Fianna Fáil leader Micheál Martin and the Sinn Féin leader Mary Lou McDonald will also be out.

The No campaign is happy to see greater visibility of politicians – it will strongly push its “Don’t trust politicians” line in the final days. According to John McGuirk, spokesman for the Save the 8th group, the No campaign will also urge voters who want to see some change to Ireland’s abortion laws but are uneasy with the Government’s proposals to legislate for abortion on request up to 12 weeks to “send them back for something better”. They will argue that a No vote on Friday would force politicians to come back with a less liberal, or more restrictive, change to the law.

Getting out the vote

Buoyed by weekend polls which show it has a strong lead, the Yes side is urging its supporters to stay focused on the themes and arguments that have marked the campaign so far. Campaign director Deirdre Duffy says she is happy the Yes side is “talking about getting out the vote – not trying to land some big punch”.

The Yes lead in the polls is borne out by the campaign’s canvass returns and its own research.

But both sides will focus considerable efforts this week on getting out the vote – encouraging supporters to turn up to the polling stations on Friday to have their say, organising lifts and text message and online reminders to their supporters.

Turnout will be key to the result. One of the reasons why referendum outcomes are unpredictable is because of wildly fluctuating turnout figures – with numbers varying between the 60s and the 30s in percentage terms depending on the topic. With just days to go, each side holds the same fear: that not enough of its supporters come out on the day.