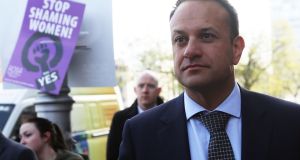 In publicly announcing his position last January, Leo Varadkar said he had to think “long and hard” about supporting the committee’s proposals. Photograph: Brian Lawless/PA Wire

Taoiseach Leo Varadkar has said he came to his own conclusion on how Ireland’s abortion laws should be reformed in advance of the Oireachtas committee which shaped the Government’s own proposals.

Mr Varadkar largely kept his counsel as the committee conducted his work, and for weeks after it issued its report in December.

However, he said on Friday he had reached the same conclusion as the Oireachtas body in advance but independently of the committee process which began in April 2017.

The committee recommended the Eighth Amendment to the Constitution should be repealed and to permit abortion without restrictions for the first 12 weeks of pregnancy. Mr Varadkar has said legislation would be introduced along these lines if the referendum passes next Friday.

The Citizens’ Assembly, which laid the ground for the Oireachtas committee, had also recommended the introduction of abortion without restriction for the first 12 weeks.

“I wanted to make sure we had a proper, deliberative process,” the Taoiseach told the Don’t Stop Repealin’ podcast, citing the Citizens’ Assembly and the Oireachtas committee.

“It was only after that work was done that I really wanted to let people know about the conclusions about that I had come to as well, which was very much in line with that. I think if I had announced where I was heading earlier I might have been accused of trying to influence or put pressure on members of the all-party committee, which I didn’t do.

“Having studied the facts, they came to a similar view as I did, very much independently.”

In publicly announcing his position last January, Mr Varadkar said he had to think “long and hard” about supporting the committee’s proposals.

“In making my decision to support it, I listened to the views of others – medical experts, the public, my party and Ministers, friends. Above all, I listened to women. I had to think long and hard about the provision for abortion without a specific indication in the first 12 weeks.”

“The Taoiseach’s own views were formed over a period of time. There is no particular day on which they crystallised. He was very much informed by the views of the Citizens’ Assembly, the views of the party, the public, and the all-party committee. The most important thing is that next Friday, the Irish people will have their say on an issue of crucial importance for women. It’s a once in a generation decision.”

1 Trump refuses to commit to peaceful transfer of power if he loses election
2 Swedish expert backtracks on herd immunity for Ireland
3 'The next 10 days are critical' - NPHET warns young people are ending up in ICU
4 Clampers used unauthorised ‘spotter workaround’ for higher bonuses
5 Miriam Lord: Micheál has Mary Lou pegged as a street angel and House devil
Real news has value SUBSCRIBE