Children’s fiction covers all the basics from child-eating monsters, to nature and grief 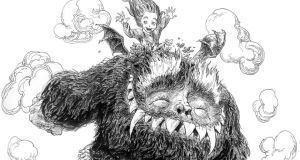 The Yark: a child-chomping beast stalks through suburban bedrooms across the globe looking for a decent meal.

Little ones who are afraid of the dark might do well to steer clear of The Yark (Gecko Press, £6.99, 6+), a sinister tale by Bertrand Santini, in which a child-chomping beast stalks through suburban bedrooms across the globe looking for a decent meal. “Boys in bacon, orphan gratin, chicken-fried children, breaded babies, leg of twins, brats in a bun”: he isn’t fussy. The problem, however, is that naughty children give him indigestion, and good children are hard to come by. “Ah, how monsters yearn for the good old days!” he laments. “Once upon a time, children were tender and innocent [but] modern times produces almost no edible children.” However, the Yark is clever as well as fierce and he has an ingenious idea: to steal Santa’s list of saints and sinners and track some well-behaved children down. What he hasn’t anticipated is the good children’s ultimate defence – misbehaviour – and when the Yark comes to call, they relish the opportunity to be naughty, leaving him with a very tender tummy.

Translated from Italian by Anthony Shugaar, there is a distinctly European flavour to this scary fairytale, which does not compromise on style or sensibility. It does, however, offer a happy ending, which is also a lesson in friendship and compromise. Laurent Gapaillard’s black and white pencil sketches have a Sendakian quality and add an extra level of appeal, creating a look for the beast that is both fierce and friendly. The Yark is an edge-of-your-seat story for newly independent readers with a hardy constitution.

A worthy read about man and nature

The titular mammal in Ariki and the Giant Shark (Walker Books, £5.99, 6+) may terrify the villagers of Turtle Island, but the bold Ariki, child of the ocean, is not so easily scared. She swims alongside it, looks into its large blue eyes and understands it means no harm to humans. When Queen Manatui orders the local fishermen to hunt it down, Ariki sets about finding a way to convince them to protect the Great Shark rather than kill it.

Ariki is an exotic heroine who easily wins the readers to her side: man and nature need not always be in competition. Her unusual gift for reading the stars and communicating with creatures of the sea brings a mythical quality to the Pacific-set tale that elevates it above realist coming of age stories, while Nicola Davies, a well-known zoologist as well as an author, does not shy away from thick description of the ocean world, or the threats posed to it by human intervention. Nicola Kinnear’s illustrations, meanwhile, are generously scattered throughout the book, making this a visually attractive as well as an exciting, worthy read.

Two tales about friendship and self-belief

There are a pair of exotic heroines at the helm in Lizzie Davies’s Juniper Jupiter and Grace Easton’s Cannonball Coralie and the Lion (both Lincoln Children’s Books, £11.99, 3+). In the former we meet a girl who is “super kind and super brave . . . super-fast and super-sneaky . . . super-strong and super-super-smart”. In the latter we meet a girl who is “funny and brave and silly and strange” and doesn’t like rules. Both books are idiosyncratic tales about friendship and self-belief, with colourful illustrations that are rich with background detail. Either would be the perfect companion for feisty young readers looking for unusual female characters that subvert traditional gender roles.

Bee, the younger sister in Sarah Moore Fitzgerald’s The List of Real Things (Orion, 10+, £6.99) is another girl with extraordinary powers. Much to her sister Grace’s frustration she speaks like a character in an old-fashioned book and, in the aftermath of her parents’ death, she also claims to see ghosts. Despite her embarrassment at Bee’s behaviour, Grace would do well to heed her strange logic: being cool and popular is not the same as being kind and nice.

“Talking about death and sadness is difficult for everyone,” says Mary the Feelings Doctor, who the girls’ well-meaning Uncle Freddy insists they see when their emotional problems become too much for him to handle. Moore Fitzgerald, however, finds it easy to talk about the impact of grief, which she portrays powerfully as “a hole in our lives, all ripped and ragged and raw”. She also illuminates other serious issues in the book. Grace’s personal drama, for example, maps the difficult transition from tweenhood to adolescence. The List of Real Things is a book with a wide appeal for mature pre-teens and early teens alike, reaffirming a message that parents will appreciate: please, dear children, don’t be in such a hurry to grow up.

Extraordinary reflections of a 90-year-old uncle

Michael Morpurgo also had a well-meaning uncle, Francis Cammaerts, and his latest book, In the Mouth of the Wolf (Egmont, £12.99, 8+), is inspired by Francis’s escapades as a secret agent during the second World War. It is narrated by Francis on his 90th birthday as he reflects upon his extraordinary life: being parachuted from aeroplanes, decoding German messages, escaping from the Gestapo. Morpurgo brings a particular tenderness to his evocation of Francis’s life and legacy, while the level of historical detail gives the book an educational edge too. Illustrations by graphic master Barroux create a counterpoint to the comic-book capers, providing a grave and gritty portrait of personal suffering as well as heroism.