‘I can write in that American voice quite easily. For everything else I cheat’

Irish crime writer Steve Cavanagh on misdirection, manipulation and other tools of the trade 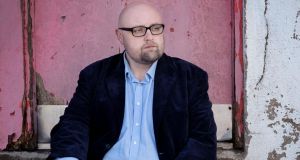 The theme of justice runs through Steve Cavanagh’s life and work. He is a student of advocacy. As a lawyer he likes to do his own court work. He talks admiringly of Clarence Darrow, the leading early-20th-century American lawyer, and Darrow’s near contemporary Sir Edward Marshall Hall, the formidable English barrister.

Cavanagh says there is a cross-pollination of skills between con men and advocates. He cites manipulation, distraction and misdirection – qualities he has brought to Eddie Flynn, the protagonist of his bestselling legal novels, which have earned him the Crime Writers’ Association’s coveted Gold Dagger award.

Cavanagh is good company. He laughs easily and often. There’s a big-man bonhomie about him, self-deprecation as a second nature. He hosts a podcast called Two Crime Writers and a Microphone, with Luca Veste – they don’t take themselves too seriously.

He knows what his territory is. The four Eddie Flynn novels are set in New York. Asked if he’d set a book in the North, he cites Stuart Neville, Adrian McKinty and Brian McGilloway – “the three Northern Irish writers closest to my fiction wheelhouse – and they’re all much better writers than me. Their work has a much greater depth to mine, and I simply couldn’t match it.”

There is a craft about the work; his grasp of the utilitarian and respect for the maker considered native to the city. “I know Belfast very well. It’s my city. I love it.” The Flynn books are well-made, crisp and fluent thrillers taking place over 48 hours. These are books that know their purpose, and they deliver.

Asked about the New York setting, he laughs. Cavanagh hadn’t set foot in New York by the time he’d written the first three Eddie Flynn novels. His reference points go from Starsky and Hutch through Kojak and the Dukes of Hazzard to Cagney & Lacey. An era of golden-age television. “I can write in that American voice quite easily, so I can get the books sounding American. For everything else I cheat.”

It’s hard to argue with the cheerful admission of cheating, but he’s hit on something: our own view of the United States held up to us. If he had set the books in Memphis he would have to describe the city, its people and its buildings. “There would be a lot of world-building going on... but nearly everyone in the world will have a mental image, or at least a good sense, of what New York is like.”

Using Batman’s Gotham as a framework, the city is primed and ready and open to what you want to bring to the party, the US having a different take on the suborning of culture. Invention being closer to the surface, the outlines of the new world are more receptive to the author’s sleight of hand. Authenticity is almost an old-world concept.

His new novel Twisted changes the formula. “I didn’t want to be – oh, he’s just the legal thriller guy.” There’s a metatextual slant to it. The narrator, JT Lebeau, is a fictional author  and nothing is as it seems. “I like books about writers.” On the complexity of the plotting, he says: “I didn’t know if I could write it, that’s one of the reasons I did it.”

You expect cynicism about the law, but Cavanagh’s take is nuanced. “The law is a strange thing. When it works there is no feeling like it.” He works for a small firm in Newtownards, in Co Derry. His results are impressive: he has won high-profile cases, including a landmark judgment in 2010 on racism in the workplace; he got the highest award of damages ever given in the North for a racism case. “That was a good day’s work.”

When I was 18 or 19 I wrote a couple of screenplays. I even got a rejection for one from Francis Ford Coppola, who didn’t like it because it wasn’t Irish enough, whatever that means

Cavanagh chooses when to be drawn and when to be discreet. But there is no misdirection when it comes to talking about his upbringing. He credits his mother with bringing him to reading and then writing. Brought up in the red-brick Holylands of Palestine Street in Belfast, he moved with his family to the cottages on the Ormeau embankment when he was four or five. His dad still lives there. He talks about walking with his mother to War on Want for second-hand books and borrowing from the Ormeau library.

Susan Sontag says reading precedes writing. Reminiscing on reading habits, he remembers that his mum read Catherine Cookson and crime fiction. As a young boy he graduated from the Beano and the Dandy to Sherlock Holmes and Spike Milligan. A warmth to the telling. His grandfather loved Songs of a Sourdough, by the poet Robert Service. His dad read The Count of Monte Cristo.

Later, his mother bought him The Silence of the Lambs. He devoured the book and, after that, the film. “When I was 18 or 19 I wrote a couple of screenplays, got an agent, but never sold anything. I even got a rejection for one of the scripts from Francis Ford Coppola, who didn’t like it because it wasn’t Irish enough, whatever that means.”

You can sense the absorbed craft of the screenwriter in the books: structure and organisation, getting into scenes late and getting out early, hooks. There is always a sharp tag line. In his previous book, Thirteen, it reads: “The killer isn’t in the dock. He’s in the jury. Nothing left to chance.”

After the screenwriting he didn’t write again for 15 years, his mother having died in 2011. “My mum’s death hit me hard, and I was depressed for a long time. What helped me get out of it was writing.”

He’s straightforward about what he does being on the commercial side of fiction writing, and what the parameters might be. The problem is not ideas, he says, but picking out the right ideas. He leaned on John Grisham for guidance, Grisham talking not about the book the writer himself would want to read but the book other people would want to read.

He likes the story about Clarence Darrow and the hat pin. The celebrated lawyer would put a pin through a cigar and light it at the start of the day’s proceedings. He’d wear a crisp white suit. The idea is the jury would watch the cigar, transfixed by the ash trembling over the clean linen, the prosecution case going unheeded.

He’s honest about the struggle. His first book, The Defence, went out to more than 30 publishers and came back. His first agent told him it would never be published. Then the offers started coming in, followed swiftly by calls for translations. The same agent returned for second helpings recently, having a go at Cavanagh’s latest Eddie Flynn novel, Thirteen. It went too far for Cavanagh. His response on Twitter was swift, detailed, forensic, reminding the agent that the work he had turned down has since hit the bestseller lists, received numerous accolades and been translated into multiple languages.

I grew up in a working-class area in Belfast during the Troubles. Maybe because of that, I have always been on the side of the underdog, the ordinary citizen

But the instinct for justice re-emerges. When Cavanagh heard that the tweet was hurting the agent’s business, he took it down.“I could never prosecute. I don’t have it in me. I grew up in a working-class area in Belfast during the Troubles. Maybe because of that, maybe something else in me, I have always been on the side of the underdog, the ordinary citizen. I believe in people. I don’t necessarily believe in the state.”

His wife, Tracy, is his first reader. “Women have a much more acute sense of justice.” And family comes first. When Lisburn Council was slow to respond to a request for autism services in 2017, Tracy took it to task, the injustice intolerable. The council folded.

Cavanagh is a man who can’t believe his luck, while also knowing that he has made his own. He turns up regularly on social media with genre giants like Ian Rankin and Lee Child and knows that he belongs there. There’s a relish for life. There’s a generosity.

You sometimes get the feeling there is a little misdirection heading your way: you’re watching the cigar ash instead of listening to the prosecution. A burning intelligence behind the big laugh, the feeling that being on the receiving end of a cross-examination wouldn’t be a comfortable experience, innocence the only mitigation. The books are set in New York, but the values are solid, northern, not to be gainsaid.
Twisted is published in paperback by Orion. Steve Cavanagh, Karen Hamilton and Elly Griffiths will talk about the nature of the villain in crime fiction, as part of Belfast’s Noirland international crime-fiction festival, on March 10th