An Orchestra of Minorities by Chigozie Obioma review: Dive right in

This strong, unusual story is narrated by a man’s chi – life force and guardian spirit 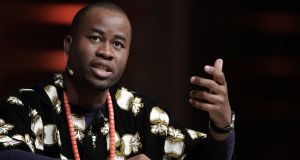 Chigozie Obioma: His writing is lyrical in places, knife-sharp in others. Photograph: Brill/Ullstein Bild via Getty Images

Book Title:
An Orchestra of Minorities

An Orchestra of Minorities opens with three quotes: an Igbo proverb, a short piece about the nature of a person’s chi from Chi in Igbo Cosmology by Chinua Achebe, and a longer excerpt about identity, duality and reincarnation, attributed to a voice recording by Dibia Njokwuji of Nkpa. As a long-term sufferer from three-quote discomfort – the primary symptom of which is a peevish irritation when a writer wants me to approach their book via a series of palate cleansers, as though they are concerned readers can’t consume it authentically otherwise – I am curious to see what’s next. Turns out, it’s two pages of charts about the Igbo ethnic group native to Nigeria: a Chart of Igbo Cosmology and the Composition of Man in Igbo Cosmology.

Keep going through the First Incantation, and finally it’s time for chapter one, The Woman on the Bridge. The woman in question is Ndali Obialor, who comes from a prosperous family and is studying to be a pharmacist. She has recently been thrown over by her boyfriend of five years and is contemplating suicide. The blow, we learn later, was unbearable, “because she had given him five years of her life, gathered her life savings and even stolen from her father to help him achieve his dream of getting a degree in film directing from a school in London. But barely five months into this move to Britain, he was married.”

Chinonso Solomon Olisa, a lonely poultry farmer in the habit of calling women he likes “mommy”, intervenes to stop Ndali, and throws two of his prized new chickens into the water to illustrate how severe a drop it is. “He feared what she would do if he left, for he – himself a man of much sorrow – knew that despair was the disease of the soul, able to destroy an already battered life.” Not long afterwards, they meet again and begin an intense affair. This relationship becomes both modern and mythic; a modern love story that painstakingly examines despair, destiny, and human determination.

Ndali, beguiled by the care he shows to his poultry, cannot see the pain that has scarred him so badly: “The world he’d known till the night his mother died had become reticulated and could not be straightened again … Nothing his father did repaired the chink in his soul.” Her family do not approve of the match, so Chinonso decides to make himself marriage-worthy by selling everything he owns and going to college.

The story is narrated by Chinonso’s chi, his life force and guardian spirit, the bridge between the spirit and human world, who testifies before the almighty on his host’s behalf when Chinonso finds himself in a truly horrific situation as a result of his determination to be found worthy by Ndali’s family. Not only does using such a narrator allow Obioma offer more than one perspective on the events that follow, but it gives him scope with language and metaphor far beyond what we might have otherwise expected from an ill-educated, isolated farmer. As a result, the prose is elegant and finely tuned: “He turned towards his van, but because of the gravity of the sorrow he’d seen in her, even the momentary shuffling of his feet away from her seemed like a grievous act of unkindness.”

The writing is lyrical in places, knife-sharp in others: “pain afflicted him night and day and made of him an empty house in which traumatic memories of his family lurked like rodents”, and it’s a testament to the strength of the core story that long descriptive passages – such as those about the landscape, or poultry keeping – can maintain the same engaging fluidity as far more intense scenes.

Chinonso is referred to as “my host” by his chi, and this unusual narrative relationship creates enough space for us to understand Chinonso as closely as if we were both inside his head and as an observer desperate for him to react differently. It’s a fascinating perspective because his chi is both writer and reader of Chinonso’s story: “I continued to flash the thought in his mind many times that day, but the voice of his head would counter each time and tell him that it was too late.”

Chigozie Obioma’s debut, The Fishermen, won a clutch of awards and was shortlisted for the Man Booker Prize in 2015. An Orchestra of Minorities is his second novel, and already equally well-rated. My advice is just to dive straight in.