Move over, Don Draper. How Shaw used ads as recruiting posters in disguise 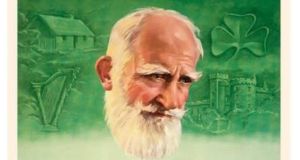 When enlistment numbers in Ireland were noticeably lower than those in England and Scotland during the summer of 1915, the British army turned to Bernard Shaw to boost their recruitment campaign blitz.

His eventual contribution, a one-act entitled O’Flaherty VC, was not the affirmative endorsement Sir Matthew Nathan, Under-Secretary for Ireland, or General Sir John French, commander-in-chief of home forces, had hoped for. They lobbied the Abbey Theatre intensely to cancel the planned 1916 production “for fear of rioting in Ireland, and because it was felt that some passages of the play taken out of context might be used by the Central Powers for propaganda purposes”.

William Butler Yeats and the theatre’s business manager WF Bailey gave in, and O’Flaherty VC would have to wait until February 1917 in Belgium for its first performance. Among the dangerous sides to Shaw’s short play is a sharp critique of the army’s promotional pitch and its modest proposal for a change in strategy.

The play’s eponymous hero is Dennis O’Flaherty, a clear stand-in for Michael John O’Leary, the first Irish soldier to be awarded the Victoria Cross and one of the enlistment drive’s cornerstones, featured prominently in posters, leading parades, and giving platform speeches.

While Shaw’s repeated discouraging of direct correlations between O’Leary and O’Flaherty initially seems disingenuous, the play’s subtitle (A Recruiting Pamphlet) provides a clue as to his actual satirical target. It wasn’t O’Leary the man Shaw appropriated for the play. Rather, it was O’Leary’s celebrity that interested him, and he, as biographer Michael Holroyd puts it, “Shavianized it for the stage”.

Consistent with much of his writing at the time, Shaw in O’Flaherty VC seeks to awaken a public gulled by sentimental propaganda produced by the war industry.

Like O’Leary, Shaw’s O’Flaherty, replete with his own Victoria Cross and fresh from a sensational battlefield exploit, has been conscripted by the campaign as a perfect testimonial provider but instead significantly departs from the official script, undercutting his reputed heroism as well as his supposed patriotic motives for enlistment.

Shaw through O’Flaherty indicts the British government’s mendacity, its methodology of ideological cloaking through romanticised tropes of British nationalism. Nonetheless, Shaw still characterised his play as a “recruiting poster in disguise”, one that argues the need to re-conceive recruitment marketing in Ireland.

Hence, the “placards headed ‘Remember Belgium’ . . . led Irishmen to remember Limerick and its broken treaty” while, in response to “a fresh appeal [of] ‘Irishmen: Do You Wish to Have the Horrors of War Brought to Your Own Hearths and Homes?’, Dublin laughed sourly”.

In O’Flaherty VC, Shaw switched rhetorical directions and sought to “appeal to [the Irishman’s] discontent, his deadly boredom, his thwarted curiosity and desire for change and adventure”. In short, he suggests, Irish recruitment will be successful when it seeks to capitalise on the fact that “an Irishman’s hopes and ambitions turn on his opportunities of getting out of Ireland”.

Shaw’s one-act manifesto on effective recruitment tactics is contemporary with industry thinking about commercial product marketing in general. In America, just before the war, the J Walter Thompson company originated the business model for the modern advertising agency and revolutionised promotional practice with a decision to “approach the reader from his own point of view, instead of the manufacturer’s”, a move that would spawn the advent of market research and focus group testing as well as significantly boost the viability of the celebrity testimonial.

O’Flaherty VC thus not only reminds us of the considerable overlap at the time between commercial and government advertising (as ubiquitous posters and pamphlets on behalf of the latter deployed many of the same marketing strategies as periodical adverts on behalf of the former) but also illustrates how savvy and prescient Shaw was on the subject of modern publicity.

From the beginning of his public career, Shaw was always his own best copywriter for print appearances in newspapers, magazines, and advertisements, a practice for which he often found himself rebuked by his critics and detractors. As the most recent in a long line of biographers rising to defend the playwright, Fintan O’Toole has argued that the GBS campaign is the pre-eminent quality of his genius and “one of the great achievements of the history of advertising [launched by] one of the great masters of self-invention [who was among] the first to understand that in this mass media age, performance is not just what happens on the stage, it is everywhere.”

One of the most surprising components of his viral self-branding is his participation in commercial ad campaigns; while seemingly at odds with his Fabian Socialist political sensibilities, Shaw viewed them as opportunities to reach, as he did with his sports journalism, a different demographic in readership, providing copy platforms for him to promulgate his GBS persona and the lifestyle and sensibility it embodied.

While his first foray into product endorsement happened involuntarily (when his throwaway comment about Formamint lozenges in an op-ed letter got immediately recycled into an attributed quote in print adverts), Shaw would go on to contribute to campaigns that were internationally high profile in their success but also incredibly influential in combating the negative public perception of celebrity testimonials.

Following his participation in notorious campaigns for Harrods and Simmons mattresses in the late 1920s, trade publications were just as fixated as the popular media on GBS’s every move. By 1946, his collaborative copywriting with J Walter Thompson executives on behalf of Pan-American’s air service from New York to Ireland resulted in a campaign that nearly obscured the product itself; instead, it centred itself around the playwright’s participation to help remedy persistent public concerns about the veracity and compensation practices of personality marketing.

Throughout, even as agencies were leveraging his celebrity to market commercial products, Shaw continued to use these appearances as opportunities to reach prospective Shavian converts, in essence as recruitment posters in disguise.
Christopher Wixson is the author of Bernard Shaw and Modern Advertising: Prophet Motives, published by Palgrave Macmillan