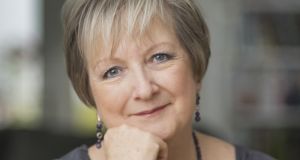 Catherine Dunne: “It means a great deal to me at this point in my career. The award for literature is a very special kind of peer recognition.” Photograph: Noel Hillis

The 2018 Irish PEN Award for Contribution to Irish Literature has been awarded to Catherine Dunne. The award will be presented at The Irish PEN Annual Dinner on Friday, February 22nd at the Royal St George Yacht Club, Dún Laoghaire, Co Dublin.

Dunne said: “I am extremely happy that Irish PEN has chosen to honour me with this award for my contribution to Irish literature. It means a great deal to me at this point in my career. The award for literature is a very special kind of peer recognition and I want to thank the committee for selecting me. Writing is a mostly solitary occupation and sometimes we writers feel invisible. It’s always uplifting to know that our work is out there, making connections with readers and with the writing community all over the country. The February event in Dún Laoghaire is always a great opportunity for us writers to get together. I owe a lot to the Irish writing community: for support, for shared projects and above all, for friendship.”

Irish PEN have recently joined with members of WORD, a group of writers who meet at the Irish Writers Centre, to form Freedom to Write, supporting PEN International’s Freedom to Write Campaign.

Vanessa Fox O’Loughlin, chair of Irish PEN said: “Freedom of expression and solidarity among writers are at the heart of PEN. PEN started in the aftermath of World War One bringing writers together to express cross border solidarity. PEN campaigns for freedom of expression for all writers but vitally for individual writers who are silenced, harassed, imprisoned and murdered because they have the courage to write. Now, more than ever, freedom to write is vital in maintaining democracy. Silencing writers threatens everyone’s freedom.

“Catherine Dunne has had a huge influence in her career as a writer. We’re thrilled that she was nominated by the membership for our annual award, giving further opportunity for her valuable work. Anne Enright was hugely supportive of our Freedom to Write Campaign last year and Catherine will play a unique role in continuing that. The committee seeks to highlight the predicaments of those writers who are oppressed, or silenced or whose lives are in danger because of their work for human rights.”

Dunne said: “Freedom to Write is a global campaign that I believe is increasingly necessary in today’s world of ‘fake news’ and unfiltered social media outrage. I’m delighted to work with other writers to support those who have been silenced, oppressed or imprisoned because of their defence of human rights at home and abroad. Because we believe words matter. And the words of those writers who oppose corruption and inequality in all its forms matter most of all.”

Dunne was born in Dublin in 1954. She studied English and Spanish at Trinity College, Dublin and went on to teach at Greendale Community School in Kilbarrack.

Her first novel, In the Beginning, was shortlisted for the Bancarella, the Italian Booksellers’ Prize, in 1998. Her second, A Name for Himself, was published that same year and was shortlisted for Novel of the Year at Listowel Writers’ Week. She has also written one work of nonfiction, a social history that explores the lives of Irish immigrants in London in the 1950s, An Unconsidered People (2003).

Between 1998 and 2012, Catherine published six further novels: The Walled Garden, Another Kind of Life, Something Like Love, At a Time Like This, Set in Stone, and Missing Julia. Her work has been translated into several languages. In 2015, she was longlisted for the first Laureate for Irish Fiction Award.

In 2013, The Things We Know Now was awarded the Giovanni Boccaccio International Prize for Fiction and was shortlisted for the Eason Novel of the Year at the Irish Book Awards. Her 10th novel, The Years That Followed (2016), was longlisted for the International Dublin Literary Award in 2018. She has recently completed her 11th novel, The Way the Light Falls.

Catherine served as a board member of the IWC for three years. She was instrumental in setting up literary exchanges between Irish and Italian writers.
Find out more here: irishpen.com/activity/freedom-to-write

About the Award
In 1998 Irish PEN set up an award to honour an Irish-born writer who has made an outstanding contribution to Irish Literature. This Award is for a significant body of work, written and produced over a number of years, and is open to novelists, playwrights, poets, scriptwriters etc. Members of Irish PEN nominate the candidate. In keeping with the tradition started at the W.B. Yeats dinner in 1935, the writer is presented with the Award in the company of other writers at our annual dinner. Prominent members over the years have included Lady Gregory, W.B. Yeats, Lord Longford, Sean O’Faolain, Liam O’Flaherty and Frank O’Connor.

Irish PEN is affiliated to International PEN, a worldwide association of writers with over 140 branches in 90 countries. PEN stands for poets, playwrights, editors, essayists and novelists. The organisation exists to promote friendship, freedom of expression, international goodwill and intellectual co-operation between writers from a variety of mediums.