How I came up with the Read Irish Women Challenge 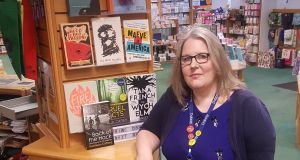 Karina Clifford: my own knowledge has been considerably increased and I have discovered new authors such as Sheila Pim

On the plane home from a trip away, I wondered idly: if someone set up a reading challenge, focused on Irish women writers, would anyone be interested? I sat and scrawled names and ideas for the whole of the flight until I had four or five pages entirely covered.

So that decided me. If I could come up with enough ideas for a month’s reading challenge without recourse to the internet, it should be accessible to most readers! A few days later I field-tested the idea in my bookclub (Grown Ups Read Young Adult Too – catchy, eh?) and everyone was on board and very enthusiastic.

The last step, to turn my scribbles into something fit for public consumption, was to enlist the help of someone with mad graphic design skills – my friend and fellow bookseller Martin Shannon. With only three days to put together a design, he rose to the challenge to produce the clean, attractive final layout – and we were good to go!

So on March 30th, I put the first posts up on Instagram and Twitter to see if anyone was interested. I thought there might be a bit of interest, but I was not prepared for the amount of engagement with the idea that followed.

On April 1st, the first day of the challenge, the prompt was appropriately enough: “A book written by an Irish woman that made you laugh.”

I was at work so had no idea how interested people were until I went for lunch. I was lucky to grab a cup of tea as the tweets were flying fast and furious and it was all I could do to keep up! It was tremendously exciting; the only thing that put a dampener on things was the dread that someone would be unhappy with me creating a women-only reading challenge and decide to have a go.

So I was taken by surprise when pushback came from a completely different direction – some people felt I had left out categories I shouldn’t have (children’s books; writing as Gaeilge) but gamely joined in with books in these areas in response to the daily prompts. I wanted to be as inclusive as possible, so tried to word the prompts so they were open to people’s own interpretation.

Luckily, most of the Twitter folk engaging in the #ReadIrishWomenChallenge were supportive and had fun with it; among them were Rick O’Shea, Claire Hennessy, Claire Allan and Liz Nugent. My own lovely employer Dubray Books got on board, and my colleagues in the Blackrock bookshop were keen to add their suggestions to the daily changing display.

There was a wonderful sense of like minds enjoying an online conversation about books every day; Twitter can sometimes be a harsh, judgemental space, but by and large readers were happy to encounter new authors and recommend their own. I know my own knowledge has been considerably increased and I have discovered new authors I’d never read before.

One I’d never even heard of is Sheila Pim, a Quaker who wrote four crime novels set in Ireland in the 1940s and 50s; the titles for anyone interested are Common or Garden Death; Creeping Venom; A Brush with Death; and A Hive of Suspects.

I’ve now read the last two thanks to Dublin City Libraries unearthing these out-of-print books from their vaults! They are delightful reads that use her own knowledge of gardening, botany and the art world to create vivid, witty slices of Irish life with a gently ironical undertone. I was introduced to this author by Gerardine Meaney, professor of cultural theory in the school of English, drama and film in UCD. I asked her what she enjoyed most about taking part in the #ReadIrishWomenChallenge.

Prof Meaney told me “how good it was to have a social media forum where academic researchers, writers, librarians, booksellers and the general reading public were able to share enthusiasm for Irish women’s writing…and [I] now have a list of fantasy and YA titles I haven’t ever come across…”

I was delighted that people were being introduced to the writing I love; though I consider myself fairly knowledgeable on books in the crime, children’s, teen and young adult areas by Irish women, I’m far less so on the classics – so this was a mutual exchange of information!

Chris Cusack, who has been an energetic and thought-provoking participant, said “the reason why I like the #ReadIrishWomenChallenge isn’t just because I’m discovering lots of brilliant books or think people should read more women’s writing. As an academic, and particularly a scholar of Famine memory, I think the issue of canonicity is hugely important…during my PhD, which covers 1892-1921, I realised that the majority of now forgotten Famine texts I discovered were written by women. Some obscure, true, but also many once major names. LT Meade, Katharine Tynan, Jane Barlow, Emily Lawless – very eminent writers once…if we’re not reading writing by Irish women, we’re not just neglecting a vast body of fascinating work, but – let’s be polemical here – we’re actively falsifying history.”

Although this was not something I had considered before, it was a point of view that chimed with me, given that one of the underlying impulses to create the challenge was try to address what Anne Enright calls the “profound deafness” to the female voice in Irish literature.

It’s that same impulse, I feel, that encouraged so many to join in and share with each other their love of Irish womens’ writing - whether by authors from the past, current writers, or the great books due to be published in the near future.

It’s been an incredible month, and I feel I’ve learned so much, shared my passions and possibly even made some bookish pals – now that’s what I call fulfilling a challenge!
#ReadIrishWomenChallenge