Underland: A Deep Time Journey review: a treasure about burial

Robert MacFarlane writes with intense sensory awareness of what lies beneath 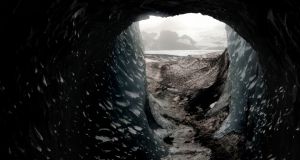 Under the ice: An ice cave on the Myrdalsjokull Glacier in south Iceland. Photograph: Jim Dyson/Getty

“A peak,” Théophile Gautier wrote in 1868, “can exercise the same irresistible power of attraction as an abyss”. As Robert Macfarlane quips, “the reverse is also true”. Long associated with mountains (through the runaway success of his first book, Mountains of the Mind), and with hiking, Underland sees the travel writer and nature writer go subterranean.

This is a book about burial and death, about hidden things; what we choose to inter, and what we choose not to see. But it is also a book of intense sensory awareness, of attention to the body and its engagement with the world around it. Built on an epic scale, and delivered with a beautifully eloquent and sensitive language, this is a book of underground temples, catacombs, the underworld of myth, of root-systems, and submerged rivers.

At the book’s opening, Macfarlane shows us just how little we pay attention to the “underland”, which “keeps its secrets well”. If we look up, we see skies, clouds, the moon, light from stars that has travelled trillions of miles. If we look down, our sight stops when it hits the floor, the soil, the tarmac. With a wide-ranging and searching scope, Underland asks us to “see more deeply”, to engage with new ways of thinking about the world, to shake ourselves from “inertial thinking” about our effects on the environment, and how we interact with it.

There is something of the mythic about this book: Macfarlane as Orpheus descending with his golden bough into the underworld. He is given two objects to carry with him. One is something to be buried: a double-bronze casket, the size of a swan’s egg, in which another person’s pains, regrets, and fears are sealed. The other is a talisman: an owl cut from a slice of whalebone, given to Macfarlane that he might carry it with him at all times in the underland, “to help [him] see in the dark”.

Such mythic resonances might sound grandiose, but they chime beautifully with the book’s core impulses. Because this is not a stale book of non-fiction: rather, it is an account of adventure, terror, discovery and hope. In fact, this is a plea for the world seen in mythic proportions – it is compulsive, and human.

This underland is also a gruesome world of accident and claustrophia. In one account, caught on camera, the decapitated head of a young man floats past a diver in a subterranean flooded chamber in the Northern Cape of South Africa. The diver is then asphyxiated, caught in his own safety cord, and found days later floating near the roof of the cave, his torch still on. In another, a caver dies caught in a cleft, and is buried there.

What is perhaps most fascinating about Macfarlane’s book is the way it treats the body. Used to expansive vistas, or even to the basic experience of light, the human underground becomes startlingly limited: horizons close in, the body seems to disappear to itself, and echoes loose through unknown passages. Such extremes bring out Macfarlane’s eye for images of the world that sear into the reader’s mind.

Driving over the Yorkshire Moors after a trip through a series of underground tunnels, he becomes fully and overwhelmingly sensitive to the world above ground, where “cottontails of bog-grass thrum in the wind, glowing like gas mantles . . . I gorge on the glut of light, the fetch of space”.

Macfarlane is effective and compelling in his reflective stance, turning the experience of the underland outwards to us, offering deeper and more shifting ideas about our world. “Time feels differently reckoned” after going underground: “further deepened, further folded”.

After a striking chapter on the networks of fungi which allow trees to communicate with one another through the soil, he reflects on his own relationship, on how we communicate with others: “I think of good love as something that roots, not rots, over time, and of the hyphae that are weaving through the ground below me, reaching out through the soil in search of mergings. Theirs, too, seems to me then a version of love’s work.”

Combining a wish “for a language that recognises and advances the animacy of the world” with an engaged and often humorous vision of the interconnectedness of things, this is a book of deep wisdom and touching humanity.