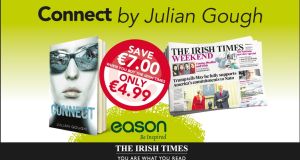 Coming up this Saturday: from Jonathan Swift to Edna O’Brien, the crash of the Irish Sea’s rough waves has been condensed and crystallised within compelling literary metaphors over the centuries, writes Claire Connolly of UCC in an essay based on her 2019 Parnell Lecture in Irish Studies at Cambridge University.

Reviews include John Gibbons on Falter: Has the Human Game Begun to Play Itself Out? by Bill McKibben; Paraic O’Donnell on The Heavens by Sandra Newman; Niamh Donnelly on Being Various: New Irish Short Stories edited by Lucy Caldwell; Julia Kelly on Suzy, Suzy by William Wall; Andrew Hadfield on Common People: An Anthology of Working-Class Writers edited by Kit de Waal; Evelyn Conlon on Red Round Globe Hot Burning by Peter Linebaugh; Seán Hewitt on Underland by Robert Macfarlane; Houman Barekat on Dublin Palms by Hugo Hamilton; Sarah Gilmartin on Crossing by Pajtim Statovci; and Rob Doyle on The Baader-Meinhof Complex by Stefan Aust, translated by Anthea Bell.

And finally, Connect by Julian Gough is this weekend’s special offer at Eason when you buy a copy of The Irish Times, with €7 off the cover price, making it just €4.99.

In this interview with Catherine Conroy, Gough calls Connect “a classically Irish novel in disguise, a dysfunctional family trying to deal with their traumas. It’s almost a John McGahern novel disguised as a near-future science-fiction novel set in Nevada.”