I felt her loss keenly while working with her poems. There were so many questions I wanted to ask her 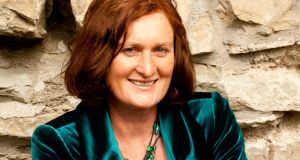 Shirley McClure: her poems are known for their unique interplay of humour and poignancy, ebullience and restraint, sassiness and tenderness. Photograph: Catherine Gundry-Beck

In late September 2016 the poetry community in Ireland and further afield was shocked and deeply saddened to learn that Shirley McClure had died. Even those who knew she was beset by a second bout of cancer were taken aback because she had been giving readings and teaching with her usual vitality right up to her final few weeks in hospital. Writing, reading and teaching poetry fuelled her life force throughout her illness.

Shirley and I were close friends since we met almost 40 years ago while studying English in Trinity College, Dublin. Poetry brought us all the closer in the last 15 years when we supported each other’s development as writers; setting up a monthly workshop group and a poetry book club, running writing courses and giving readings all over the country. Shirley had written poetry as a girl but had set it aside until her early forties when, with the encouragement of friends, she began to take her writing seriously. It was around then that I started to write and so we shared the mysterious joy of making poems as well as the highs and lows of getting those poems out into the world.

After Shirley’s untimely death her publisher, Alan Hayes of Arlen House, envisaged a collected edition of her work and invited me to edit it. Her family gave their blessing and her husband, Philip Beck, took the first step by meticulously gathering and collating her work, thereby creating a valuable archive. Origami Doll: New & Collected (Arlen House, 2019) includes Shirley McClure’s two published collections, Stone Dress (Arlen House, 2015) and Who’s Counting? (Bradshaw Books, 2010) as well as the new poems she completed in the last two years of her life.

I felt her loss keenly while working with her poems. There were so many questions I wanted to ask her. At times it felt wrong to be doing this without her and at other times it was as if she was at my shoulder helping me. I experienced again her sense of humour, her compassion and her sensitivity as I read and reread her poems. I was guided and sustained in my task by a certainty that she would want her work to be read widely.

She had high standards and would wish the 31new poems in Origami Doll to be as carefully chosen and edited as those in her previous collections. As editor I was fortunate to have the support of the other poet friends with whom she had worked closely: Geraldine Mitchell, Jess Traynor, Eithne Hand and Katie Donovan.

Shirley McClure’s poems are known for their unique interplay of humour and poignancy, ebullience and restraint, sassiness and tenderness. Her love poems convey passion and sensuality with distinctively light brush strokes. She invites the reader in with a conversational, relaxed style and brings a wry eye to everyday life, letting us see each other and ourselves with compassion. Her lines display her finely attuned musical ear and her meticulous attention to rhythm and internal rhyme. She herself spoke about the sonic influence of the hymns she sang as a child in St Patrick’s Presbyterian Church in Waterford as well as the spoken poetry she heard at home from her mother.

Shirley had a commitment to poetry as an oral art form. She loved to perform her work and to meet readers. Old friends who knew her as quite shy were often surprised to see how she shone on stage; she was in her element. She encouraged other poets to perform their work and organised a number of poetry performance workshops.

One of her aesthetic values was the role of fun and playfulness in communicating and making meaning. Like Billy Collins, a poet she valued highly, her poems combine wit and mischief with honesty and insight. Poster Girl, The Occupational Therapist and The Argument for Chemotherapy are funny and fiercely grim, reflecting ironically on the experience of being a cancer patient. Her ability to reflect on this experience without sentimentality is a gift for readers.

In her first collection, Who’s Counting?, there are poems about watching both her mother and father die from cancer as well as her own experience of breast cancer. One of these, Washing Dishes for my Mother is a beautifully simple poem from the last weeks of her mother’s illness, expressing how the most ordinary tasks become sacred when loss is imminent. Reconstructed tells the story of visiting a woman who has had breast reconstruction before the poet herself had the same surgery. It conveys a moment of deeply moving solidarity and empathy between two women who have just met for the first time.

A newer poem, What’s Sexy?, unflinchingly scrutinises the impact of illness on a couple, conveying both devastation and resilience as does an earlier poem, Engagement. This is a skilful sestina in which the relentlessness of the form itself is like the illness in how it controls the poet. Yet it is the poet who triumphs by facing the new reality of her life and shaping her response.

With lovely synchronicity the title poem, Origami Doll, is currently widely displayed as one of the poems chosen by Elaine Feeney to celebrate Poetry Day Ireland. In her commentary Elaine highlights the poem’s beauty, poise and attention to form.

“The extended metaphor of the origami doll is precise and perfect, but it also excavates the power of the mind, the strength and independent spirit of the doll. There is a raw tension between power and tenderness in this poem and the brutal sadness of the passing of time.”

Elaine concludes that the poem is ultimately life affirming, accepting, balanced and grateful; a fitting tribute to the poem, the collection and the poet.

Alone
on a mirrored shelf
she displays

her flat chest,
the artful grace
of her kimono.

So cleverly made
you’ll never
work her out.

Tentatively passed
from hand to hand,
she’s kept away

from forces
that will change her
into ash or mâché.

But as you know,
a doll
has a mind of her own –

she’s in love
with the illusion
of flying.

No matter how
careful you are,
one day

without so much
as a bow,
she will leave you

for the River of
Three Crossings
or you may find her

dressed in white,
six coins in the palm
of her hand.