Ciara Geraghty on losing her father to dementia, a subject she tackles in her new novel 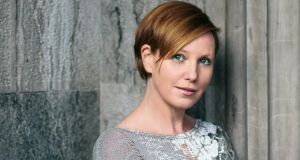 Ciara Geraghty: I was under the impression that I had come to terms with my father not being here, long before he died. And then I found that list.. Photograph: Doreen Kilfeather

I found the guest list for my last book launch. It fell out of a folder and floated to the ground, sort of quiet and apologetic, like the last leaf from a tree after a balmy autumn.

I had divided the list into sections, the first one was “Family”. Beneath that heading, my father’s name.

When a person has dementia, pieces of them are taken away, a bit at a time, like furniture from a house that’s been sold to the highest bidder. Until, in the end, there’s nothing left but bare rooms and echoes of the things they used to say. The person they used to be.

I was under the impression that I had come to terms with my father not being here, long before he died. And then I found that list. Looking at it, I realised that his name will never again be on a guest list. That bare fact seemed, somehow, more final than death. Maybe that’s how we deal with death. In fragments like these. Taken as a whole, it is too immense to fathom. The never ever again quality of it. The finality. The End writ large across the screen of somebody’s life and all the things they were, all the choices they made, all the ways they had of being in the world, disappearing like credits until there is nothing but a blank screen.

Memory is a strange beast. Why do we remember certain events and conversations so clearly? And others fade like a handprint on a windowpane.

My father remembered an eclectic collection of stories in the end. Riding on the crossbar of his father’s bicycle to first Mass on Thomas Street where my father sang in the choir. Sitting on the wall behind his house with his brothers and sisters, watching cows being led to slaughter. Playing his first game of cricket on a patch of grass in Rathmines when he was 12. The brutality of the Christian Brothers in Synge Street. Savages, my father called them, his eyes wide with the memory, as if he could see them still.

He remembered music too. Dave Brubeck and Frank Sinatra. I remember him at my last book launch. He sang Strangers in the Night, my mother sitting with her arms around him and her face pressed into his neck, whispering the words of each line.

Dementia is a cruel disease. It takes its time, dismantles its victim, slow and methodical. And so, there was relief when he died. I would never again have to visit him in the nursing home where he spent the last six months of his life, with Daniel O’Donnell on a loop on the telly, the sickly sweet smell of talcum powder along the corridors and the photographs of each patient, beside the door of their bedroom, taken on the day they arrived, staring at me as I walked past, as if they were trying to tell me something.

And so he smiled his warm, generous smile when the photographer took his picture that day. As if everything was alright in the world. I didn’t look at his face when I kissed him goodbye that first day. I couldn’t get out of the place quick enough. I held my breath all the way down the corridor so that I wouldn’t have to smell the sickly sweet talcum powder smell.

There was a visitor book in reception. I clocked in and out, like a factory worker. I sat beside my father and talked about anything I could think of, my voice louder here, as if I thought I might get through to him that day, it was just a question of pitch. The weather forecast. Something funny my daughter had said. What he’d eaten for lunch. How my son was doing at school. If it might rain soon. What my eldest was up to now. Really? University? Wasn’t that something else! How cold it was. How warm it was. What he’d eaten for dinner. Something funny my daughter had said.

The conversation on a loop like the Daniel O’Donnell DVD, and the woman in the chair beside him, slight as a sparrow, sitting up straight every now and again and reciting her address, like the line of a poem that she had learned as a child and still remembered.

The relief when he died, that I would never have to go back there. And then the guilt of feeling relieved. Those feelings on a loop too.

Life goes on in that relentless way it has. It shouts at you to wake up, get up, show up, make your bed every morning, lie on it every night. And so you do, you get up, you show up, and in this way, time goes by. In this way, a year and a half goes by.

I write a book in which one of my characters has dementia and then I start to organise the book launch and I look for the guest list from the last book launch and there it is, the page, fluttering to the ground. I catch it before it lands and I see his name there, in the section marked “Family” and all of a sudden, I am filled to the brim with a grief that feels brand new. Box fresh.

Afterwards, I write this down. Writing is a bit like throwing up when you’ve got a stomach bug. You don’t want to do it but you feel better once you do.

My father died on a still, bright December morning. I’d never seen anybody die before. He made it look easy. I was reminded of that poem, Death is Nothing At All, by Henry Scott-Holland. “I have only slipped into the next room.”

I remembered something a friend told me once. How you should open the window to release the spirit of the dead to the afterlife. My father didn’t believe in an afterlife. He always said, “Lower me down the mossy bank and that’s a wrap.” But I opened the window that still, bright December morning all the same.
Rules of the Road by Ciara Geraghty is published by HarperCollins