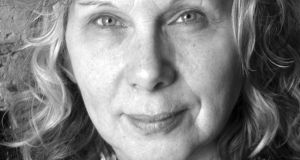 Jude Nutter: this year’s winner was previously shortlisted in 2014

Jude Nutter has won the €10,000 Moth Poetry Prize for her poem Dead Drift at a special event at Poetry Ireland in Dublin last night, as part of the Poetry Day Ireland celebrations.

The international reach of The Moth Poetry Prize, run by the publishers of The Moth magazine in rural Cavan, is reflected in the range and calibre of this year’s shortlist, which featured poems by Margaret Haas (US), Steven Heighton (Canada) and David Stavanger (Australia).

Nutter, who was born in Yorkshire and grew up in Hannover in Germany, has a family home in Dingle in Kerry, and divides her time between there and Minneapolis, where she has been working since 2000.

This year’s judge, Jacob Polley, had no difficulty in settling on the winning poem. “Jude Nutter’s Dead Drift does so many things, it seems to me, only a poem can do,” he said. “Studded with gorgeous words and phrases that serve with shrewd intensity the poem’s obligation to the weights and textures of the world, the poem is syntactically sinuous, so that line endings and verse breaks become perceptual; become, actually, a way to simultaneously organise what is known and excitingly disrupt how it’s made known.

“Like a time machine, this poem becomes the river it describes, which ‘opens everywhere/and always and only into itself’ and in whose surface is apparent the present, the recent past and the deep past – is apparent the mystery of self and a relationship with a father, and the shelving off into deep time of human history. You can’t want much more as a reader from a poem.”

Widely published internationally, Nutter’s poetry has received more than awards and grants. Her first poetry collection, Pictures of the Afterlife, was published by Salmon Poetry after she won The Listowel Prize in 2002. Her second collection, The Curator of Silence (University of Notre Dame Press), won the Ernest Sandeen Prize and was awarded the 2007 Minnesota Book Award in poetry. A third collection, I Wish I Had a Heart Like Yours, Walt Whitman (University of Notre Dame Press), was awarded the 2010 Minnesota Book Award in poetry and voted Poetry Book of the Year by ForeWord Review in New York. Her fourth collection, Dead Reckoning, will be published by Salmon Poetry next year.

The prize is judged anonymously by a different judge each year, and in 2014 Michael Symmons Roberts chose another of Jude’s poems for his shortlist, which is an amazing testament to her work as the prize receives thousands of entries from across the world.

Water shelving off into darkness and the mind,
which accepts the river’s depth, is perplexed
by the eyes’ denial. Flat as shadow

on grass you lie, watching the mouth
of the net held close to the bank, waiting
for a wide-open, astonished eye, for a wedge
of head to cohere out of silt and present
itself, as all beings born into time
do, with defiance and out of matter
both moving and held
motionless in suspension. Then the quick

veer, the glint-thrill, the solid, flexed silm
of a body at the surface as it turns. After that,
the backwash, a sluggish roil, the vane of a tail

receding. Where was I, you think, before I
was suddenly here – cleaved cell, a gyre

of code unlocked? In the net’s uneasy
alchemy each brown trout
rests, finning in place, nose to the current,
until your father, who caught each fish and slipped
each hook and holds the net, submerges

its rim and decants each life back
into the flow of the river – not a fish, not a trout, no
nameable shape – just a finned smear, a flare
of copper. Then nothing but your own reflection
restored to the water’s surface as the water
restores its mirror. Early evening, a sudden

coolness filming the skin and, as if
some marvellous army has placed its shield wall
to rest, canted sunlight falling
in blazons on the water. Here, for a while, before

humping north to face the tribes
of Caledonia, a small and weary detachment
from the Ninth Legion of Rome did
place their shields and their weapons down,
right here, on the banks of the Wharfe,
and named their settlement Calcaria, meaning
lime. The pale blocks of empire quarried, right here,
by slaves, on territory stolen from the Celtic tribes,
on the great north road to Eboracum.
But before all this – before the Brigantes

and Romans and Vikings and French, before flints
and axes and spear blades; before the age
of long barrows and dolmens; before the first
brattle of war and occupation and everyadvance and obliteration of history, there was stone
and the stone’s own story of molluscs and forams
and corals. Evidence of oceans, of time’s
crushing indifference. Out in that river,

in chest-high waders, your father is loading
his rod for the cast; the loop of the line unfurls
and the fly – a Pale Evening Dun – settles
on a seam where two currents meet and

dead drifts to where eddies mark a trout
sipping mayfly from the surface. Not once
have you asked your father why, when he crimps
the barbs flat against the shank of every hook and files
them smooth and then releases
every fish he fights and fatigues and plays

into the net, he even fishes at all. Perhaps
it has something to do with how the fly
presents itself perfectly on the water; or the line,
a filament of sky come lose, unfurling. No, not the fly,
or the line, but his arm casting. No, not that: not

the casting, but the arm lifting, suddenly,
to set the hook. No not even the arm,
but the whole body reacting. A river
is a closed door that opens everywhere
and always and only into itself and in the long,
continuous lick of its current is a man
standing motionless, braced

for the strike. And before there was pigment,
before the first flute, before fire; and until all the hands
silhouetted in ochre, until the aurochs and ibex
and spotted horses walked out of the mind as the mind
unhooked itself from darkness,
there was this: the whole body reacting – animal,
instinctive. And after, not the reaction,

but the seconds it took – not many, but one; no,
not even one, not the seconds at all,
but that fraction of unmeasurable time in which

whatever was about to be done
remained undone.

Note: Stanzas 12, 13 and 15 owe a formal debt to Stephanie Brown’s poem Constellation, inspired by a line from Dan Pagis’ poem The Art of Contraction