Dust To Dust, a short story by John O’Donoghue

A Requiem that an altar boy will never forget 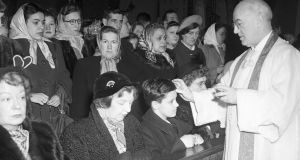 Fr Thomas O’Connor places the traditional ashes on the foreheads of the devout at St Catherine of Siena in New York City on Ash Wednesday 1950. Photograph: Getty Images

We stood in the sacristy and waited for Fr Ryan. The smell of beeswax and lingering incense hung in the air, and I thought hungrily of the breakfast I would eat after serving Mass.

‘He’s getting late,’ said my cousin.

Suddenly the door from the presbytery opened and in walked Fr Casey, portly, frowning and red-faced, the broken veins in his cheeks like a map of Hell’s rivers.

‘No,’ answered Fr Casey gruffly. ‘Mrs Murray sent her eldest boy up on the bike about half an hour ago. Her husband is in a bad way and needs a priest. I had to send Fr Ryan.’

Mattie and I looked at each other. Fr Casey’s young curate was a much nicer priest to serve Mass for altogether, according to my cousin. He wouldn’t scold you on the altar or give you a telling off back in the sacristy when it was over. Mattie said Fr Casey was fond of a drop of the hard stuff, ‘a strong man’s failing’, but Fr Casey didn’t look strong this morning. He was suffering, his face ruby from the booze, cranky as a hornet in a bottle.

Uncle Seamus’s ashes stood on the dresser behind us, a whole shoebox of them. I’d never heard of anyone being cremated before. Uncle Seamus had emigrated to America when he was a young man and had died in New York a fortnight ago, aged 69. He was my mother’s uncle and wanted to be buried back in Ballydown. But he had no family out in America: he’d never married and there was no one who would pay for his body to be shipped back home. So it was decided that he should be cremated and his ashes sent over. My mother told me that the Pope had just allowed cremation for Catholics although I didn’t fancy it myself. How could you be resurrected from ashes blown about everywhere on the wind?

It was a poor way to go. But this was to be his Requiem and Mattie and I were not about to let anybody down. Seamus wanted a day we’d all remember, according to his friend Mr Lupelli, who lived in Queens. My mother had shown me the letter, and I’d marvelled at the stamp. It showed Colonel John Glenn splashing down, and I wondered if we’d ever send letters to the moon and how much the stamps would cost.

His hands trembled as we helped him into his vestments, and I knew this wasn’t going to be easy. When we were done he said,

‘Are those the ashes?’

‘Come on then,’ said the priest. Fr Casey picked up the box of Uncle Seamus’s remains and processed solemnly with them out to the altar. Mattie and I followed behind.

The chapel was full to bursting. I recognised my mother, my aunt and uncle and my cousins, all in their Sunday Best sitting in the front pew to the right of the altar. There were a few other relatives I knew dotted about amongst the congregation, then a whole sea of faces I didn’t know at all. The turnout meant that at least Uncle Seamus was getting a good send-off.

Mattie and I followed Fr Casey to the altar, and stood either side of him. The priest put the box of ashes on the altar, bowed, and welcomed everyone. I noticed the statues were all covered, but was still a little lightheaded from the overnight fast to take much notice. I knew I had to concentrate on getting everything right. Fr Ryan had granted special permission for me, as Uncle Seamus’s grand-nephew, to serve Mass. Although this was the One, Holy, Catholic And Apostolic Church, the universal church throughout the world, I thought there might be some little differences in the way Mass was said here, and that if I wasn’t on my toes, so to speak, I might make some terrible mistake, like getting my responses wrong, or, God forbid, dropping the chalice or spilling the wine. I wanted to fit in, not make a show of myself.

But it was going well. The Kyrie was out of the way and Mattie and I went to the opposite ends of the altar and sat in the choirstalls for the Readings. My mother took the second reading, from St Paul’s First Letter To The Corinthians. I wasn’t sure who the Corinthians were, but I knew that footballers in Queen Victoria’s time were named after them. Mr O’Reilly, who took us for RE, said St Paul was a good runner and I wondered if he played football up in heaven with the Corinthians.

I started to daydream. I often did when I was hungry and I had a hunger on me now that made me dream of fry ups, and stews and dumplings. I was ready to eat a carthorse and I’d moved on from wondering about how Uncle Seamus had got to know Mr Lupelli to thinking about New York and cheeseburgers and thick strawberry milkshakes when I heard Fr Casey hissing at me.

‘Give me the ashes!’

I jumped a foot. Why did Fr Casey want Uncle Seamus’s ashes? Surely there was a good bit of the Mass still to go?

‘Come on you young pup, what are you waiting for?’

Fr Casey’s red-rimmed eyes were boring into me. He was not a man to be crossed, especially at 10am on a dreary midweek morning, suffering the horrors, full of fire and brimstone. I stepped out from the choirstall and advanced to the altar. I picked up the box containing Uncle Seamus’s ashes, walked over to Fr Casey and handed them to him

He gave me a dirty look from his glassy eyes. I nodded reverently and returned to the choirstall. By now I was thoroughly puzzled. Shouldn’t Mass be entering the holy moments of prayer and transubstantiation I had witnessed countless times, knew almost backward from having served on the altar in England? I thought perhaps I had missed something, that my daydreaming had led to me skipping great passages of this Requiem, Uncle Seamus’s farewell to the gleaming towers of downtown Manhattan, to modern times and the future, to Ballydown and where he’d come from.

Slowly, the congregation approached the altar rails. Fr Casey was there to greet them, a small metal vessel in his hands. As each parishioner approached him, he put his thumb in the vessel and placed the sign of the cross on their foreheads. My mother was the first to receive Fr Casey’s blessing and as she turned away I was mortified.

There, on her forehead, was a smear of ash. I knew now why the statues were veiled: this was Ash Wednesday, the start of Lent, and all the people processing up to receive the sign of the cross were being smudged with ashes from the box on the altar. Fr Casey had decanted them into his little vessel and was signalling now for me to come and top him up. But the ashes were the wrong ashes! The ashes in the box were the remains of Uncle Seamus! They weren’t the ashes for Ash Wednesday at all!

What I could I do? I couldn’t stop the Mass. Fr Casey would excommunicate me. From the choirstall opposite Mattie was grinning like a cat, but I didn’t think it was a laughing matter, not at all. Fr Casey was looking very cross now. He must be running out, I realised, and there were still lots of people needing their ashes.

I walked over to the altar, bowed and picked up the box of Uncle Seamus’s remains. I took the box to Fr Casey, who used a little scoop to decant them into his vessel. I bowed and walked back to the choirstall, as the priest continued applying Uncle Seamus’s ashes to the foreheads of the mourners. I was powerless to stop him, resigned now to Fr Casey dispersing the last of Uncle Seamus onto the foreheads of the congregation, and watched as they all walked solemnly back down the aisle. As the last of them returned to their pews, I looked out, each of them daubed with a grey star on their foreheads, and I thought then that at least Uncle Seamus was amongst his own, and offered up a prayer for him, and his friend Mr Lupelli, and all who died so far from the land of their birth.
This story is from the collection The King From Over The Water, published by The Wild Geese Press. Some of the stories were published in The Stinging Fly, London Magazine, Aesthetica, and The Frogmore Papers