Sovereignty linked stance on both Northern Ireland and the European Community 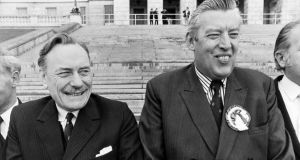 In October 1974, Enoch Powell (1912-1998), the British Conservative best known for his outspoken opposition to immigration, became the Ulster Unionist MP for South Down. This was a highly unusual move for an English politician and the manner in which it came about owed a great deal to Conservative Party debates over membership of the European Community.

To an extent, these arguments, involving sovereignty, and sometimes framed in populist terms by Powell, have echoes today. But, at the time, there was also a distinct way in which Powell connected the defence of the Union in Northern Ireland with resistance to membership of the European Community, arguing that both stances were imperative to the survival of what he saw as the British nation.

Powell announced his opposition to the prospect of UK membership of the European Community in 1969 but his views had already fluctuated over the years. Back in 1950, the year he became MP for Wolverhampton South West, Powell had opposed British participation in the European Coal and Steel Community on the basis that it would rupture the British empire – to which he was deeply committed.

Before long, however, Powell saw the break-up of the empire as inevitable and, by the time the Conservative government under Harold Macmillan applied for membership of the European Community in 1961, Powell embraced economic arguments in favour of joining. Powell had increasingly adopted a free-market perspective, which was still a marginal position in British politics, and argued that membership would facilitate greater competition in a larger market.

Britain’s application was rejected but, as the Labour government made another bid for membership in the later 1960s, Powell argued that closer association with western Europe would provide a more realistic focus for Britain’s defence policy than either a reliance on what Powell saw as the self-serving United States or a misguided attempt to maintain a presence in former imperial outposts.

In March 1969, as the UK’s second application looked set to be rejected, Powell dramatically changed his position. He was, of course, outside the shadow cabinet at this point, having been dismissed the previous year by party leader Edward Heath – who had defeated Powell in the 1965 Conservative leadership contest and now objected to his inflammatory language. Notoriously, Powell, a classical scholar, had alluded to the poet Virgil to make a prediction of racial violence if mass immigration continued: “Like the Roman, I seem to see ‘the River Tiber foaming with much blood’”.

With Heath strongly committed to European Community membership, Powell launched a scathing attack on the idea. While now dismissive of any economic benefits of membership, Powell’s central objection was that it stood to undermine British parliamentary sovereignty. Powell had actually played down these concerns when they had earlier been raised by others but they went to the centre of his whole political position, which emphasised sovereignty at the core of the British nation. Seeing this threatened, especially by the prospect of a directly elected European Parliament, at the 1970 general election Powell argued that “the question of joining the Common Market is the most fundamental of all”. He went on: “It is a question not merely, what sort of a nation are we to be but what nation are we to be?”

Yet 12 days after victory in the 1970 general election, Heath launched the third application for Community membership and, outside government, Powell pressed his arguments further in an increasingly bitter and personal feud. Arguing that Heath had not made an overt commitment to entry in the election manifesto, instead taking his 30-seat majority as sufficient mandate, Powell argued him of “sleight of hand”.

Powell also compared the government’s handling of the European issue with immigration, contending that in both cases the public had not been consulted about a significant change. In heavily populist terms, Powell argued that “the pattern has every appearance of being the same: a minority, perhaps a small minority, determines the question over the heads of the majority, and then the majority is presented with a fait accompli and told that it is good for them and that anyhow it is too late to argue about now”.

As negotiations to join proceeded, and with Powell believing that public opinion was hostile to membership but with clear support for it in parliament, he spoke of “a perilous dichotomy between Party and Parliament on the one side…and the people on the other side”.

With some of the foremost opponents of British entry among its ranks, and with the party moving towards support for a referendum on the issue, Powell now began to speak of Labour as a way out of the impasse. Powell remained uneasy, however, about endorsing a referendum because it sat uncomfortably with parliamentary sovereignty. With the UK joining the European Community in 1973, Powell then decided not to seek re-election as a Conservative MP in the general election of February 1974. Instead he asked his supporters to vote Labour and to place the national interest above that of party.

Just days later, Powell spoke to the Ulster Unionist MP, Jim Molyneaux, about the possibility of contesting a Northern Ireland seat. Powell had been close to Molyneaux for several years, and he had taken in interest in Northern Ireland since 1968. Earlier Powell had sometimes spoken of the English nation but, from the mid-1960s, he was talking more consistently about the British nation defined by the geographical boundaries of the UK.

Amid the onset of the Troubles, and with the rise of nationalism in Scotland and Wales, Powell became concerned about the unity of the British nation. Interpreting Ulster Unionism as “the claim to be part of a whole…the British nation”, from 1970 Powell advocated a policy of integration for Northern Ireland with Great Britain, making it clear that he opposed Stormont, or any kind of devolution, because it undermined Westminster’s sovereignty and fostered a sense of “separateness”. This view echoed late 19th- and early 20th-century unionists who had considered that Home Rule would destroy the Union. But, even with sporadic bursts of interest in the idea, especially after the suspension of Stormont in 1972 and the introduction of direct rule, integration remained at odds with entrenched Ulster Unionist pro-devolution sentiment – despite Powell’s efforts to persuade them otherwise in his 13 years in South Down that lasted until 1987.

Yet, for Powell himself, sovereignty linked his stance on both Northern Ireland and the European Community. And, as he campaigned in South Down in 1974, he made this absolutely clear. In dramatic language, consciously stoking fears of British “decline”, Powell argued that a promotion of parliamentary sovereignty was needed to demonstrate “our ability to take a grip upon ourselves as a nation” and to indicate whether the nation possessed “the fibre or the will to defend itself against other assaults, from within or without”.
Paul Corthorn is the author of Enoch Powell: Politics and Ideas in Modern Britain (OUP, £20) and is a Reader in Modern British History at Queen’s University Belfast