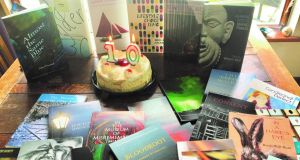 In September 2006 my now fiancé John Walsh was visiting me in Portland, Oregon, where I was living at the time. While on a day trip to Cannon Beach the subject of having children came up. We’d been walking barefoot along the warm sand with our shoes in our hands and were now standing in the shadow of Haystack Rock, a 72-metre monolithic intertidal sea stack that one could choose to take as a metaphor for what we were facing.

To have or to not have kids, the ultimate deal breaker in a relationship. John stared up at the rock for a moment and then turned back to me. He said that if he were to ever want to have children it would be with me but that the time in his life to have kids had passed. But a few years later, not long after I moved to Ireland and in with John, we had an unplanned birth.

It might not have been borne from my belly but it came into this world kicking and screaming and at times waking us in our sleep. From the very first day it took over our lives.

We named it after John’s city of birth. Doire – Derry in English – translates as oak grove, which are common both in Derry and in Connemara, where we live. John likes to tell people that naming the press, our baby, Doire was a way of building a bridge between the two places. (I sometimes like to remind him that there are oak trees in Los Angeles, where I am from, too.)

Because Doire wasn’t planned and we had little experience to go on, we reared it the best we could, taking things as they came, asking for help sometimes and learning along the way. We wanted to be true to who we were and what we loved, and so we resisted practicality and instead went with our hearts, which might explain why we chose to make our niche in two of the most unmarketable and unprofitable literary genres: poetry and short stories.

It wasn’t enough that our publishing base was not only west of the Shannon, but also smack in the heart of Connemara. In the Dublin-centric Irish publishing world it couldn’t be more impractical. But logic be damned, we were being true to ourselves and doing it our way. And that was the spirit in which we raised the press – taking risks on writers who might not otherwise be published because we believed in their talent; running poetry and fiction chapbook competitions to encourage new writers; and later running bi-annual reading tours to promote the writers we have.

When Doire was young we strived to protect its innocence, especially with regard to putting art above business for the sake of art. Business was an unkindly word that made us cringe. We wanted to preserve the simple beauty of art for what it is, never to let money become an important factor in Doire’s development. We didn’t want that for ourselves and especially not for our writers (ironically, however, it was one of our writers who taught us that little Doire was, whether we liked it or not, a bona fide business and that we’d better accept it).

We loved Doire, business warts and all. The bigger it grew, the prouder we became, showing off its development in photos via Facebook posts and tweets. Look at what little Doire’s done now, and now, and now! Just as parents took pride in their child’s first steps or their first words spoken, we too had our benchmarks, raising a glass of champagne on each occasion. Our first mention in The Irish Times (30 under 30 being chosen by Joseph O’Connor as a Top Pick of 2011); our first nomination for the Forward Prize for Poetry (Adam White’s debut collection, Accurate Measurements); our first literary win (Madeleine D’Arcy’s Waiting for the Bullet, winner of the 2015 Edge Hill Reader’s Prize); our first review in The Irish Times (Eamon Carr’s Deirdre Unforgiven); our first book taught at a university (Galway Stories); the first time two books were shortlisted for the same award (Stephanie Conn’s The Woman on the Other Side and Simon Lewis’ Jewtown were two out of three titles shortlisted for the 2017 Shine/Strong Award); our first publishing talk (Doolin Writers’ Festival, 2013); and the first time a poetry book sold over 1,000 copies (Annemarie Ní Churreán’s Bloodroot, now on the cusp of selling over 2,000).

The proudest moment for us is one that happens again and again: that of first presenting the published book to a writer, an occasion made even more special if that writer is a debut. It’s a transcendental moment that sees us channelling between parent and midwife, but always feeling a bit like Santa Claus.

It hasn’t all been bubbly and Christmas mince pies though. Over the years there have been hard lessons learned, times that had us reeling with anger or doubled over in tears, and twice when we considered giving Doire up (once after being badly bullied by a writer and another time when our funding was cut). But we always managed to push through it, each time reminding ourselves to be true to our hearts and our love for Doire.

It’s now 10 years on and we’re meant to be celebrating Doire’s birthday – double digits at last! But like everything else now the celebrations have been put on hold. It’s given us time to reflect and look back, thinking of all the good things that Doire has brought, as well as the many people who have helped us along the way, the support we’ve received from the Arts Council, both in the North and in the Republic, and of course our many writers and readers. We’ll get through this strange and scary time as we always have, taking things as they come and learning along the way, raising a glass for Doire.
Lisa Frank is co-director of Doire Press and co-editor of the recently published Galway Stories: 2020.