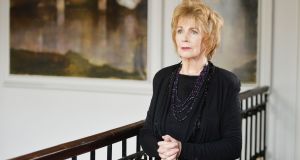 Edna O’Brien: winner of the €15,000 Kerry Group Irish Novel of the Year award in her 90th year. Photograph: Alan Betson

Edna O’Brien, who will turn 90 this December, has won the €15,000 Kerry Group Irish Novel of the Year award for her latest novel, Girl, 60 years after her first novel, The Country Girls, was published.

Girl, which has also been shortlisted for the Eason and Dalkey Novel of the Year awards and the Orwell Prize for political fiction, is a fictional account of the kidnapping by Boko Haram of a group of schoolgirls in Nigeria in 2014. O’Brien travelled to the country several times to research the story.

It is the latest honour for O’Brien, who was appointed a Saoi by Aosdána in 2015 and awarded the PEN/Nabokov Award For Achievement in International Literature and made an honorary Dame of the Order of the British Empire in 2018.

Girl was selected by authors Carol Drinkwater and Ian McGuire from a shortlist that also included The River Capture by Mary Costello; Leonard & Hungry Paul by Rónán Hession; Night Boat to Tangier by Kevin Barry; and Shadowplay by Joseph O’Connor.

Frank Hayes, of sponsor Kerry Group, said: “In celebrating the 25th anniversary of our Kerry Group Irish Novel of the Year Award, we are pleased to salute the five shortlisted writers, which greatly augment the prestige of the literature of Ireland and most especially Edna O’Brien for her brave, compelling work, Girl.”

Catherine Moylan, chairperson of Listowel Writers’ Week, said: “It is wonderful to be able to acknowledge and celebrate Irish literature during these times when a good novel can offer us escapism, comfort and hope.”

Miriam Gamble was chosen by Ian McMillan as the winner of the €10,000 Pigott Poetry Prize for her collection What Planet. Also shortlisted were Pigeon Songs by Eoghan Walls andWhen the Tree Falls by Jane Clarke.

The awards were announced at a digital media awards ceremony this evening in Listowel, Co Kerry, on what should have been the opening night of the 50th annual Writers’ Week, which was cancelled because of the current pandemic.

Poetry prize sponsor Mark Pigott said: “It is a blessing to be able to support this wonderful literary award and recognise the leading poets of Ireland. This is the seventh year of the prize and the competition is world class. I would like to congratulate the winner Miriam Gamble, which showcases the beauty, diversity and strength of Irish poetry.”

Moylan said: “Despite the festival not going ahead this year, we are so grateful to be able to promote poetry and we look forward to welcoming Miriam to celebrate her success with us in the future.”

Gamble was born in Brussels in 1980 and grew up in Belfast. A lecturer at the University of Edinburgh, she won the Eric Gregory Award in 2007, the Ireland Chair of Poetry Bursary Award in 2010 and the Somerset Maugham Award in 2011. What Planet is her third collection after The Squirrels Are Dead (2010) and Pirate Music (2014).