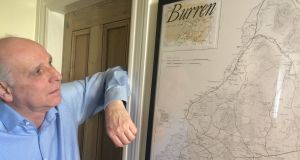 Paul Clements with Tim Robinson’s inspirational map of the Burren

On the wall at the top of my stairs hangs a large framed map of the Burren, a place which has been burned into my mind. Measuring 105cm by 75cm, the map is a tantalising reminder of a place which has smitten many.

To get to know the area requires time and it has been a regular haunt for me, a place to pause and ponder amongst the higgledy-piggledy drystone walls and swathes of limestone pavement, breathing in its mysterious alchemy.

The landscape features were drawn by Folding Landscapes, the company run by Tim Robinson, who had an intimate engagement producing his ABC of the west of Ireland with scholarly exactitude. The letters stand for Aran, Burren and Connemara, three areas where he spent decades walking, cycling, fossicking around, carrying out research, gathering local wisdom, soaking up the atmosphere and coming up with a radically new way of drawing maps.

The Burren: a map of the uplands of North-West Clare is multi-layered, merging the built heritage, history, place lore, cartography, art, topography and mathematics. First published in 1977, it was reprinted in a revised edition in 1998 to a slightly larger scale. Copies of both editions have passed through my hands and been torn, coffee-stained, laminated and colour-coded with pens marking places explored on each trip.

The esoteric white map is made up of finely drawn lines with placenames in black ink. It hangs beside a window and at certain times of the day, light is thrown on specific locations such as the Flaggy Shore, the open spaces of Sheshymore, Corcomroe Abbey near Bell Harbour or the Rock Forest at Mullaghmore, a mountain about which Robinson wrote: “Its terraced sides are so curved as to make it look like a layer-cake that has sunk in the cooking”.

Other places recall flashbacks of sightings of spectacular flowers such as the dazzling blue gentian at Murrougtoohy near Black Head alongside early purple orchids and magenta geraniums, or creamy mountain avens growing profusely on roadside ditches at Gleninagh. The nectar of their names remain long in the afterglow.

Robinson characterises the Burren as “One hundred and fifty square miles of paradoxes”. His map encourages your eye to wander through the area, almost smelling the tang and salt-sting of the sea, feeling the playful Atlantic wind and seeing the ocean blue light as though standing amidst the dishevelment of a boulder streak of glacial erratics.

His familiarity with the terrain and fascination with its glaciated karst and fertile valleys became irresistible and the map is a work of art. Making it was a painstaking process which took seven years walking and cycling through the labyrinth of boreens, forcing himself into every corner, which he called a “long lonely struggle, often in foul weather”.

The drystone walls threading their way across the hills are like contour lines and Robinson used the old six-inch-to-the mile Ordnance Survey map as a template but his map goes with the grain of the land. He decoded the landscape with symbols of human aspiration, turning his sheet into a vast outdoor encyclopaedia. It incorporates all the known archaeological monuments and prehistoric remains of cashels, cairns and standing stones.

The ruins of abbeys, churches and castles take their place alongside townland names, hills, villages, turloughs, dates of battle, drove roads, mass and pilgrim paths, and, of course, the Khyber Pass, following the course of the Caher River.

For Robinson everything was mappable, and for good measure, he added a few puzzles, doodles and whimsies. Look closely through a magnifying glass and you will see disguised within the terraced hillsides, clints and grykes, the names of women friends, as well as meconopsis, the Welsh poppy, just north of the Tuirín Naofa blessed bush. They are hidden amongst dashes, squiggles, twirls and shapes like miniature waves. In the centre he marked with a dot in tiny print “a strange field”, a cartographic curiosity which caused considerable interest.

Writing in his final book, Experiments on Reality, published in 2019, Robinson stated that there was no way of showing what was remarkable about the field on his map – it was just a grey emptiness “with wind-shorn shaggy thistly stuff”. He referred to “the Burren’s slithery resistance to the grip of cartography … which makes rock slippery with rain and confounds horizons with mist”.

During an interview in 2002, he explained that there were no specific influences in his map-making. “I am proud of the fact that I have come to cartography completely from the outside,” he said, “and in ignorance of its traditions and its own formulation of itself. I came to it from a fine arts background and used it as an art form. I wasn’t remotely interested in what the standard way of representing limestone was, for example. I was much more interested in using some sort of graphic texture on a map that would represent my own experience of the place rather than imposing a blanket label of limestone.”

Books played a vitally important role in his life and he liked to quote from writers, invoking their epigrams and opinions. Robinson, who was brought up in Ilkley in Yorkshire, was a voracious reader, and as a young boy became interested in natural history. He recalled his first literary experience was a children’s work A Squirrel Called Rufus by Richard Church (1941). This book, which he described as “a pantheistic paean to the beauty of wildlife in the forest”, had a deep influence on him. He enjoyed books on moths and butterflies and in the back of them made lists of insects he had seen in the 1940s.

The wide-open millstone-grit moorland which Emily Brontë wrote about appealed to him and when he explored these horizons it helped him understand her writing. Artistic, mathematic and scientific writers such as Herbert Read, John Ruskin, RW Atkins, George Spencer Brown and James Gleick were all part of his literary landscape.

He became an admirer of the intensity and passion of the work of Ludwig Wittgenstein. A cult figure who lived at Rosroe in northern Connemara for several years, Wittgenstein wrote that the west of Ireland was the “last pool of darkness in Europe”, a phrase Robinson adapted as the title for the second volume of his Connemara trilogy in 2008. Wittgenstein’s Tractatus Logico-Philosophicus was a work Robinson re-read many times. “It is wonderfully resonant in its style and in its vatic and strange pronouncements, and people have been puzzling over it since it was published. It was the book that made him famous in philosophical circles but he later repudiated a lot of what he said in it.”

When he moved to the west of Ireland in 1972, Tim Robinson immersed himself in local culture, learning the Irish language and spending most of every year on the Aran Islands for 12 years before settling in Roundstone, Co Galway. He was intrigued by JM Synge’s work and wrote an introduction to a new paperback edition of The Aran Islands.

“One always reads about how Synge romanticised the islanders and had primitivistic ideas about how they approximated almost to the ideal of the noble savage. But he instantly subverts that by pointing out how incompetent they can be as boatmen. There are some very funny passages in which he describes their mercenary nature and their fecklessness in failing to mend a leak in the boat. There is a good deal of irony and self-ironisation in it and an element of realism.”

He was widely read on the natural history work of Robert Lloyd Prager whose book A Populous Solitude introduced him to the botanically sacred ground of Roundstone Bog. He also studied the prolific fieldwork of the antiquarian Thomas Westropp who had begun collecting material as a teenager since 1878.

“Westropp was important to me and he was a very good writer with an alert eye. He spent his life recording the Irish countryside and I found some wonderful papers by him. He sets out very modestly to describe some of the principal monuments of the Burren. After he has described about a dozen of the biggest cashels and cahers he is thoroughly caught into the machine of his own interest and goes on and on producing dozens and dozens of papers; he keeps going back and finding more monuments.”

Asked what three books he would take to a desert island, Robinson replied: “Long ones – I used to read cyclically Proust’s À la recherche du temps perdu. It’d take that as it would keep me going for a good length of time. My second choice would be a philosophy book, most likely a Heidegger. And thirdly, Father Patrick Dinneen’s Dictionary of the Irish Language which is an extraordinary volcano of words.”
Paul Clements is the author of Burren Country: Travels through an Irish Limestone Landscape and Wandering Ireland’s Wild Atlantic Way, both published by the Collins Press