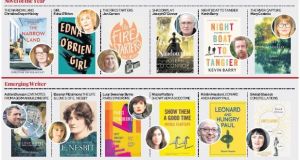 The winners will be revealed on June 20th when the festival was due to be taking place.

Ireland’s literary scene may be suffering the same fate as the rest of society with bookshops shut and festivals cancelled because of the pandemic. Its writers, however, have arguably never been in such demand. Witness the popularity of the TV adaptation of Sally Rooney’s Normal People and yesterday’s news of a six-figure book deal for debut author Louise Nealon, 27.

That paradox is reflected today with the announcement of strong shortlists for two major new prizes, the inaugural Dalkey Literary Awards for Novel of the Year and Emerging Writer. The awards, sponsored by Zurich Insurance, were to have been the centrepiece of next month’s 10th annual Dalkey Book Festival, but instead they are the only part of it to go ahead.

The six books shortlisted for the €20,000 Novel of the Year prize are The Narrow Land by Christine Dwyer Hickey; Girl by Edna O’Brien; The Fire Starters by Jan Carson; Shadowplay by Joseph O’Connor; Night Boat to Tangier by Kevin Barry; and The River Capture by Mary Costello.

Four of the titles have deservedly featured on several shortlists but the recognition for Costello’s dream-like Joycean novel and Carson’s magical realism-influenced tale of parent-child relationships in post-Troubles Belfast is overdue and welcome.

As well as two novels, this shortlist features a collection of essays, a biography and two short story collections – a recognition of often overlooked literary forms that is to be applauded.

David McWilliams, co-founder of the festival, said: “2020 has been an awful year for writers: book launches have been postponed, festivals abandoned and, of course, our wonderful book shops have been shuttered. But creativity never sleeps and I’m delighted that we are able to recognise our very best during this tempest. Ireland has rarely had such a conveyor belt of literary talent, writers who have shone the light of imagination in these months of darkness.

“We are devastated not to be holding the festival this year as we had some wonderful writers and thinkers booked. But we will be back in 2021 stronger than ever and are delighted to mark the festival weekend with our new awards.”

Festival director Sian Smyth said: “These choices display the immense talent out there today; Irish writing is certainly having a moment. Inaugurating the Dalkey Literary Awards right now shows that we believe writers are important; books are perhaps especially meaningful at the moment.”

The winners will be revealed on June 20th when the festival was due to be taking place. The judges are Andrea Catherwood, who chairs the Novel of the Year judging panel, Caoilinn Hughes, Fiach Mac Conghail , Gary Jermyn, Jennifer O’Connell andRick O’Shea, who chairs the Emerging Writer judging panel.

Neil Freshwater, CEO of Zurich Insurance, said: “At times like this, when it’s easy to succumb to feelings of helplessness and anxiety, we can turn to literature to help us draw on the experiences of others as inspiration. Now, perhaps more than ever, it is a reminder of the role literature and culture plays in our society and the essential outlet that they can provide.”

The shortlisted writers have spoken of the importance of prizes. Kevin Barry said: “I’ve been haunting the wonderful Dalkey festival since it started and it’s a great old buzz to get on the shortlist for their inaugural awards. The awards are a very generous and very useful contribution to writing here, and long may they continue and thrive.”

Sinéad Gleeson said: “I’m really thrilled to be shortlisted, as prizes for emerging writers are hugely important in terms of lighting the way for a writer who is just starting out. The Dalkey Literary Awards should also be applauded for being open to all genres, which makes the mix of work included all the more exciting.”

Joseph O’Connor said: “I grew up not far from Dalkey, a little coast-town whose celestial writers were known the whole world round. My childhood and teens were blessed by those ghosts, from Castle Street to Coliemore Harbour and the island. For everyone who loves a story, Dalkey’s a special place. To have a novel in contention for this award is a deeply moving honour.”

Christine Dwyer Hickey said: “The Dalkey Literary Awards couldn’t come at a better time, now that more and more people are rediscovering the pleasure and comfort to be found in reading a good book. 2019 was a particularly strong year for Irish literature and I am thrilled to be included on this shortlist. The fact that this is the inaugural prize makes it all the more special.”

Normal People: The origins of Connell and Marianne
Real news has value SUBSCRIBE