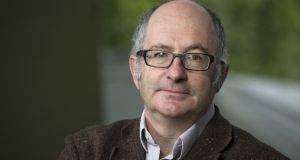 It is always a surprise and a pleasure to learn what form John Lanchester’s next book will take. His debut The Debt to Pleasure, a sublime bit of Nabokovian trickery in which a murderer tells his life-story through recipes, remains one of the best novels of the nineties. Subsequent offerings couldn’t have been more different, and this decade his writing has circled the aftermath of the 2008 financial crisis, resulting in a big state-of-the-nation novel and a brace of non-fiction books about it.

His next takes on another looming disaster, if not several. Set in a dystopian future, it describes adventure and drudgery in the life of Joseph “Chewy” Kavanagh, a young British conscript made to stare out to sea for 12 hours a day with a gun in his hand. Following an environmental event known as “the Change”, only the wealthiest and most temperate countries have found ways of remaining habitable, and a concrete wall has been built around the UK’s coastline to stop the risen sea level destroying the island. But this is also there to keep out migrants called “Others”, who are so desperate to live somewhere safe that they come highly trained, with grappling hooks and automatic rifles.

Everything Lanchester gives us, along with the environmental aspect, is an echo of our own day; Trump’s border wall, hypothetical post-Brexit borders, the refugee crisis. His allegory is a strange, powerful mixture of exacerbation and sympathy, manifesting the nightmares insular people have about threatening foreigners and then humanising them all the way back to tragedy. While the Others fight for their lives, so do “Defenders” like Kavanagh, who will be put out to sea and deprived of citizenship if they let anyone over the Wall. Everyone is a loser.

Lanchester’s prose can be hemmed in and claustrophobic, sprawl out in half-page sentences, or turn into concrete poetry experiments, but it is always functional and practised. To fit itself to time passing on the Wall during a 12-hour watch, novelistic attention to detail is slowed down. The eating of an energy bar or dry sandwich will lead to its qualities, normally beyond notice, being zoned in on for paragraphs. It takes 40 pages to get through the first of the narrator’s shifts. Because of this, when action does come, it is well earned in terms of pace. The book’s many violent scenes and action sequences are well-described, and can be riveting.

But by placing such emphasis on the action, Lanchester draws the fire of a whole new set of expectations specific to the genre. Suspension of disbelief is no longer a given, but a target. We look for holes in the book’s strategic game. No! We might shout at the book, in lieu of a screen. Why don’t the Defenders scour the sea with searchlights for approaching boats? They’ve got drones, so why not thermal imaging technology that can pick bodies out against the cold ocean on a dark night? Why don’t they use old siege defence techniques, like pouring volatile liquids down the Wall? This is one of the geeky, trivial joys of witnessing action scenes play out in a carefully-built world. But this sort of scrutiny isn’t what you want dogging a text with such a serious undertow of message and parable, and with such proximity to a world many people in the British Isles and the world at large fear will become the future. Lanchester, one can also tell, has gone to great and largely successful lengths to make the military drudge of Kavanagh’s life realistic.

The day to day texture of Lanchester’s world is brilliantly realised. People fetishise TV shows from a time when beaches existed. “How did people know what to want?”, thinks one character about the days before people were made to eat seasonally, and could buy ingredients from any part of the world, year round. One of the most interesting points is the relationship between the generations. Parents still have the reflexes of parents, but “the life advice, the knowing-better, the back-in-our-day wisdom which, according to books and films, was a big part of the whole deal between parents and children, just doesn’t work”. The previous generation didn’t have to serve on the Wall, and they destroyed the world for the next. But some “didn’t like it that younger people [were] universally agreed to have had a worse deal than [their] generation”. There is nothing that, reading this book, you can’t imagine being a symptom of such a world. And it’s a world you feel Lanchester could continue to visit for a whole series of novels.