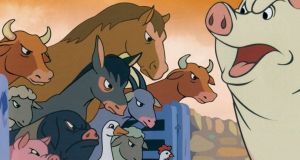 Round and round it goes. Much like the tune of a particular song can go round and round your head, a line from a book can resonate and return to the mind again and again.

When Toronto writer Anne Thériault, who tweets as @anne_theriault, asked for people’s favourite lines from books, some interesting ones emerged.

“Tell me a line in a book that changed how you see the world or shifted your understanding of how language can be used or just haunts you for reasons you don’t quite understand and maybe never will,” she asked.

Thériault’s own favourite is: “There is love, there is music, there is no limit, there is work, there is the precious sense that this is the hour of grace when all things gather and distil to create the rest of my life. I don’t believe in God, I believe in everything.”

It’s from Fall On Your Knees by Ann-Marie MacDonald.

Among the multitude of lines from books, there was much Dumbledore wisdom from JK Rowling.

“Of course it is happening inside your head, Harry, but why on earth should that mean that it is not real?” – Ashley @thoringaround

Dumbledore to Harry at the Mirror of Erised, from Harry Potter and the Sorcerer’s Stone: “It does not do to dwell on dreams and forget to live.” – Mary G James @mgjmg

“For the well-organised mind, death is but the next great adventure.” – Bharathan @bharathanrd

There were many lines from JRR Tolkein.

“I wish it need not have happened in my time,” said Frodo. “So do I,” said Gandalf, “and so do all who live to see such times. But that is not for them to decide. All we have to decide is what to do with the time that is given us.” – Cail Mangum @cail_mangum

When I read this as a kid, it filled me with the desire to adventure: “It’s a dangerous business, Frodo, going out of your door ... You step into the Road, and if you don’t keep your feet, there is no telling where you might be swept off to.’” – Zöe Stancliffe @zostancliffe

From Frodo in The Return of the King. “It is useless to meet revenge with revenge: it will heal nothing.” – Sierra White @isierranichole

This is one of the most moving passages in my opinion, in all of the Middle Earth canon. “With that he seized a great horn from Guthláf his banner-bearer, and he blew such a blast upon it that it burst asunder. And straightaway all the horns in the host were lifted up in music, and the blowing of the horns of Rohan in that hour was like a storm upon the plain and a thunder in the mountains.” – @jeremyakee

“Confusing monogamy with morality has done more to destroy the conscience of the human race than any other error.” From George Bernard Shaw’s Man and Superman. – Sonali Ray @raysonali6

“Christ did not die to save people, but to teach people how to save each other. This is, I have no doubt, a grave heresy, but it is also a fact.” Oscar Wilde, The Complete Letters of Oscar Wilde. – @MonstahofCookie

“And the animals looked from man to pig and pig to man and it was impossible to tell which was which,” from George Orwell, Animal Farm. – Adil Yousuf @AadilYousuf

“If you want a picture of the future, imagine a boot stamping on a human face-forever.” From 1984. Seems fairly apposite for our present times. – @GibsonBlackstar

From Rant by Chuck Palahniuk: “The future you have tomorrow won’t be the same future you had yesterday.” There was also: “The goal isn’t to live forever, the goal is to create something that will,” from his book Diary. Honestly, his words just tend to haunt me. – Lez Ti @zelniev

“Time and tide wait for none.” From Rebecca, by Daphne du Maurier. Max, the hero, has just discovered body of his former wife when these lines come up. Read it as a teenager and somehow this line got stuck in me somewhere! – Ritu @RitumoudgilRitu

“Damaged people are dangerous. They know they can survive.” By Josephine Hart, Damage. At 20, I thought that was like the truest thing I’d ever read. (Kind of still do.) – John Quaintance @John_Quaintance

“And once the storm is over, you won’t remember how you made it through, how you managed to survive. You won’t even be sure, whether the storm is really over. But one thing is certain. When you come out of the storm, you won’t be the same person who walked in.” From Kafka on the Shore, by Haruki Murakami. – Diphelliya Grayi @diphelliya

“The mind is its own place and in itself can create a heaven of hell, a hell of heaven.” Satan in John Milton’s Paradise Lost. – @idamia.

“Everything I’ve ever let go of has claw marks on it.” From Infinite Jest by David Foster Wallace. – Megan Liz Smith @MeganLizSmith

“Never touch your idols; the gilding will stick to your fingers.” From Madame Bovary, Gustave Flaubert. – @BabsOd

“I must not fear. Fear is the mind-killer. Fear is the little-death that brings total obliteration. I will face my fear. I will permit it to pass over me and through me. And when it has gone past I will turn the inner eye to see its path. Where the fear has gone there will be nothing.” From Dune, by Frank Herbert. – Pheeny @PheenyLockyer

“The best thing for being sad is to learn something.” From The Sword in the Stone, by TH White. – @peggysadams

“Humor is the spiciest condiment in the feast of existence. Laugh at your mistakes but learn from them, joke over your troubles but gather strength from them, make a jest of your difficulties but overcome them.” From Lucy Maud Montgomery, Anne of Green Gables series. – Freya I Addison @STEMwithFreya

“You never really understand a person until you consider things from his point of view … Until you climb inside of his skin and walk around in it.” From Harper Lee’s To Kill a Mockingbird. – Nixxi @DarlinNixxi

And seemingly the most popular author is Douglas Adams , author of The Hitchhiker’s Guide to the Galaxy.

“What’s so unpleasant about being drunk?” “Ask a glass of water.” – Suggested by several people

“The ships hung in the sky in much the same way that bricks don’t.” – Dvo Ferguson @dvoferguson

“In the beginning the Universe was created. This has made a lot of people very angry and been widely regarded as a bad move.” By Douglas Adams. – @MxOwl

“The last ever dolphin message was misinterpreted as a surprisingly sophisticated attempt to do a double-backwards-somersault through a hoop whilst whistling the ‘Star Spangled Banner’, but in fact the message was this: So long and thanks for all the fish.” From Douglas Adams’s The Hitchhiker’s Guide to the Galaxy. – @ArtByDorel