Bina: A Novel in Warnings, a book you must read but can’t 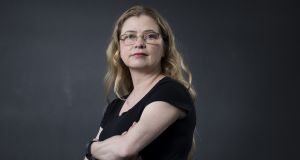 Here is a book you must read but you can’t. You can’t because the new novel by Anakana Schofield – whose first novel won two prizes and whose second novel was shortlisted for three – hasn’t been published in Ireland, the UK or even the US. It’s available only in Canada, so if you want to read it you need to have it shipped internationally for an arm and a leg. If I were you, I probably would.

Bina, like Schofield’s first novel Malarky and second novel Martin John, is narrated by a woman who is worried about her son, or almost. In this book 74-year-old Irishwoman Bina (“That’s Bye-na, not Beena. I don’t know who Beena is but I expect she’s having a happy life”) is worried about Eddie, her “sorta son” who “managed to adopt himself on to Bina because she left her coat undone & in he climbed”. The book springs from the same universe as Schofield’s earlier books, with a few overlapping characters.

Why Bina is worried about Eddie, afraid of him, is not explicitly revealed, nor is anything else in this book built on ambiguity. Even the dedication (“For every woman who has had enough”) has a double meaning. Bina is one of those women who has had enough. “When I’ve had enough, my mind shuts and into the bed I take myself. No woman was ever as good as I am at going to bed. You’d have to be a bed to better me.” She goes to bed for months at a time (“the only place you can be guaranteed peace”), dreading Eddie, worrying about her late friend Phil (a woman not a man), baffled by “young Crusties” outside her house who protest in support of her and want to stop Bina from going to prison. But why? Is it related to her previous spell in prison, for “taking a hammer to a plane at Shannon Airport”? Or is it to do with some assistance that Bina and a mysterious Tall Man have been offering to people, including her beloved Phil?

Don’t ask Bina. She is an eccentric narrator, telling her story by scribbling it on scraps of paper, on bills and receipts, which is why many lines are just a few words long, staccato sentences dropping down the page like poetry. “So if you are listening to a woman / Hoping she’ll shut up / Try imagining the 2,000 years / Where she did all the listening. / Sit down / Shut up / And if the woman is talking, listen.”

She is an unreliable narrator too. She doesn’t try to mislead the reader, but she is not always certain what’s going on, and even when she is she can’t articulate it clearly. Yet she’s awfully good company, with a colourful way of delivering her warnings to the reader. She regrets not leaving Eddie in a ditch. “I’m warning you not to lift men out of ditches and don’t trust the common declaration ‘all he needs is a bang on the head’.” She is capable of terrible comedy, and has her own brand of debatable local knowledge. “Don’t go too mad is all, Phil said, or you’ll end up dragged off the bus in Roscommon, or worse, Longford. That’s no place for a woman to be alone and mad. You’d be better off in Limerick, where the hospitals are warmer.”

This style is entirely unique: Schofield’s wit makes it slip down easily, yet her refusal to spell things out gives the reader plenty of work to determine what is going on. By not telling us explicitly what happened, we are embedded more deeply in Bina’s character. The reader has a greater investment in her story and her life, and the book makes a dialogue out of a monologue.

Despite the obsession with Eddie – what exactly has he done? – he is an absence not a presence, and as the story proceeds, Bina’s attention turns more and more to Phil, aka “Our Woman”, the narrator of Malarky. Knowledge of Schofield’s earlier books adds flavour but is not essential to get the best out of Bina. At the heart of it is her complicated grief for Phil: “Phil didn’t do enough shouting / That was her problem. / She requested, like a sane person would / And when she found no permission / She removed herself.”

No one will accuse Bina of not doing enough shouting. Her warnings pepper the reader like buckshot, sober slaps in the face amid the tragicomic malarkey. “Be careful what you think you are hiding, as it’s probably on full view. Careful not to hide suffering because you are only making more work for the people who have yet to discover it.” Here’s another warning: watch out for this book, if you do manage to get hold of it. It will undo you.