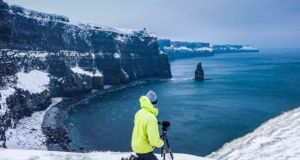 Cliffs of Moher: Kev L Smith takes a photograph in the snow on March 3rd, 2018

As a film-maker fortunate enough to live near the Cliffs of Moher, on the western edge of Co Clare, I have spent many hours photographing their beauty and magic.

Whether shooting looking upwards from my kayak or downwards from my hikes, I have always been amazed by the variety of the dramatic views they offer, whatever the time of year.

In 2018 I decided to try to document the life of the cliffs over the course of that year. My idea was to take a picture of the same view throughout the year.

As it turned out, 2018 was quite the year. Between January and February alone there were four major storms, a spring snowdrift, and one of the hottest weeks Ireland has experienced in more than 40 years.

I also talked to many local people about what the cliffs meant to them, and heard ancient folk tales of lost cities and the beginnings of love stories.

The book, Daily Cliffs, is a photo journal that represents a snapshot of one year in the life of the Cliffs of Moher. It is available from dailycliffs.com.

10.33am, January 11th Two bodyboarders and a surfer are making their way home after a chilly surf at the wave they call Aileen’s. The wave, located at the bottom of the Cliffs of Moher, is named after the nearby headland Aill na Searrach (the Cliff of Foals).

5.42pm, February 20th I saw a flock of seagulls in a golden sunset while walking back from taking my daily picture.

9.20am, March 3rd The so-called Beast from the East arrived in early March, bringing with it temperatures of -5 degrees and heavy snow. Siberian weather combined with gales from Storm Emma produced winds that hit 110km/h. It took a bit of effort to capture this photo, as the path down to the cliffs was covered with overhanging snow. I had to take care to keep back from the edge, as the snow was waist-high in places, making the edge of the path impossible to see.

8.21pm, May 22nd O’Brien’s Tower can be seen in the top left, with sea pink and sea campion flowers in the foreground. It is a round stone tower near the midpoint of the cliffs, built in 1835 by Sir Cornelius O’Brien to capture the view of the cliffs.

1.02pm, June 28th My friend Conal Byrne and I kayaked from Doolin to O’Brien’s Tower on the hottest day of the year -- at 32 degrees, the highest June temperature recorded in Ireland since 1976. Conal is paddling past O’Brien’s tower close to Aileen’s, the big-wave surf spot. A high-pressure system had brought good weather and very calm seas, conditions that are needed to kayak this close to the cliffs. These days are rare, which makes them extraspecial. Viewing the cliffs from the water gives you a unique perspective and makes you appreciate their huge scale.

7.44am, July 4th Low clouds roll off the cliffs and over a tent pitched extremely close to the edge.

3.03pm, August 3rd A busy evening on the cliffs with walkers and camera enthusiasts.

9.40am, November 18th The day brought some amazing waves. Surfers check Aileen’s, while other get changed into wetsuits half way down the goats’ trail.

4.47pm, November 3rd I witnessed a beautiful sunset and one of the first big winter swells of the season.