Review: Rob Kearney offers up some memorable insights but it is mostly a reliable and business-like account of a life in sport 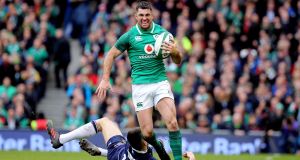 In December 1997 when Rob Kearney was 11 years old, Ireland played an international friendly against Italy in Bologna. Unsurprisingly, given the state of Irish rugby at the time, Ireland lost 37 -22.

What was surprising, however, was that the Irish number 7, Dylan O’Grady, would less than two years later be sentenced to 18 months in Strangeways Prison for conspiracy to supply cannabis. O’Grady’s international career was undistinguished – the Italian job was his only cap – but as drama the former bouncer’s story would be pure gold.

By contrast the autobiography of Ireland’s greatest ever full-back is reliable and business-like, without ever straying outside the hackneyed conventions of the genre.

This isn’t necessarily Kearney’s fault. He comes across as decent, hard-working and extremely close to his family; there is a moving chapter about the death, while Rob was still a child, of his older brother Ross. Nor is this a criticism of David Walsh, who guides Kearney deftly and fluently through the usual milestones; early days, becoming a professional, the route to the top, and the inevitable decline and fall.

In a sense the problem is the genre itself. Sports biographies sell because fans hunger to learn more about their heroes, but unless the subject has a particularly distinctive and compelling personal story to tell – Seán O’Brien is perhaps one recent such example – the details tend to blur with those of others, especially in a crowded field (Kearney’s is the fourth autobiography in the last 12 months alone to come from this successful Irish squad). Readers hoping to relive the excitement on the pitch (or boxing ring, or tennis court, or running track) will find it’s difficult for any book to capture the intensity of those thrilling sporting moments as vividly as TV or YouTube or documentaries.

There is another, more fundamental issue with any book about the life of a modern professional sportsperson: large elements of that life are monotonous, repetitive and dull. The endless training. The constant battle with injury; Kearney observes he could write a separate book about the physio tables, the rehab sessions, the operating rooms.

There are some memorable insights into the effects of the enormous pressure to succeed. In the dressing-room in Soldier Field before the All Blacks game, Kearney tells Andrew Trimble that if there was a plane outside, he’d fly straight back to Dublin. A visitor to the hotel room he shares with his brother Dave on the night before the 2015 World Cup match against France finds the pair staring blankly at a cartoon show “like men waiting to be led to the gallows”.

No wonder the initial emotion after a big win is usually relief. As well as dedication, professional sporting success usually requires Olympic levels of selfishness combined with an almost monastic existence off the field.

There’s also the persistent gnawing insecurity that you are not good enough, or off form, or “past it”. Kearney speaks frankly of watching Jordan Larmour’s star turn in a Leinster game against Northampton, when he realised Larmour had been anointed as his successor; a difficult epiphany for any player still playing, especially with the media in “messiah mode”.

Kearney is mild-mannered and diffident for the most part, but he singles out Irish Times sportswriter Gavin Cummiskey as one journalist who he felt had a vendetta against him. The suggestion that Michael Cheika was abrasive is not new; Kearney believes he picked on younger players, especially if you’d been to a “leafy boarding school”. Accounts of Joe Schmidt’s obsession with detail break no new ground either; Kearney says his video reviews were “like operations without anaesthetic” and admits to being scared of him.

His observation that he grew up loving the Lions more than Leinster or Ireland may raise eyebrows in some quarters, but I sense a genuine boyish fascination with the glamorous touring team. In the same year Dylan O’Grady played his one match for Ireland, Kearney pulled on his first Lions jersey, a prize he won in a newspaper quiz; even the size “Small” was swimming on him. Nor is he too big for his boots. Proud of his Louth roots, he recounts how Joe Biden, his “sixth or seventh cousin” (who’s counting now?) called to congratulate him after the Chicago win.

In common with recent books by Rory Best and Joe Schmidt, Kearney shies away from any meaningful comment on matters of public controversy. He mentions scribbling notes during a post-Grand Slam holiday in Dubai about what he calls “the long shadow” cast by the Jackson/Olding trial in Belfast, but doesn’t tell us more. Other opportunities are also missed.

Musing on what he’ll do when he retires, he says he doesn’t want to coach “because I don’t think I’d be very good at it”. I’d like to have heard what he thinks he lacks, and what qualities a good coach needs.

The laughably bland post-match interviews players give now seem predicated on the principle “whatever you say, say nothing”, but Kearney’s perhaps unfair reputation as a somewhat…eh, vanilla communicator has inspired the gleeful creation of the parody Twitter account @boringkearney (sample: Black bin this week nice to have something to look forward to). How, I wonder, does he feel about this and other intrusive aspects and requirements of social media as he surveys his career from the balcony of success?

The final page is a note of thanks to all the companies who have sponsored him over the years. Arguably this is just a courtesy, but it raises the issue of whether the book is a memoir or a marketing tool. It’s hard to blame Kearney for climbing aboard the bandwagon, but Joe Schmidt’s advice to his players about training-ground moves is perhaps apposite: keep things in your head rather than write them down. The book doesn’t rise to the heights Kearney did in his pomp, when he soared so majestically under all those Garryowens. But like the player, it’s an honest, brave, and sometimes compelling account of a sporting life.

John O’Donnell is a Leinster and Ireland supporter. His collection of short stories Almost the Same Blue (Doire Press) was nominated in the Irish Times as one of the Best Fiction Debuts of 2020.