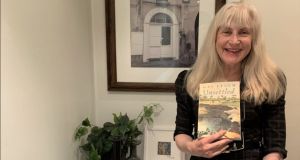 The Covid-19 pandemic has complicated book launches and promotions around the world. Many of my Australian writer friends took their new books straight to Zoom. I’m not complaining. Sure, my 2020 press-the-flesh events were cancelled. But in December 2019 on the very cusp of Covid’s arrival in Australia, I sneaked in a launch for my Galway-Australian frontier novel Unsettled at Australia’s premier Irish literary studies conference, ISSANZ.

And last March, during Adelaide Writers Week, we writers hugged and schmoozed up close, and clinked flutes of regional wine, for the very last time before lockdown. On the opening day of the festival, a very favourable Adelaide Advertiser review landed in my lap and I sang a little “live in the moment” song of gratitude.

Then, as Covid’s second wave struck, I left Adelaide to work at home in Melbourne in Stage 4 Lockdown and support my Lynch medico husband.

For months I greet him, swab in hand, at the front door. “Have you taken off your clothes?” He knows the drill now, that jumper and shoes suffice, and that the invitation he hopes for is different.

Do I hope Irish people will want to read Unsettled? Indeed, but I will not abuse that word “absolutely”. Did I not first research and publish a PhD to better understand apocryphal Galway Irish stories? But am I right that these stories influenced the Lynch family that lobbed into 19th-century South Australia, a dangerous place, and where they began steeple chasing with and against a famous Scottish-Australian poet? Perhaps I have everything wrong?

I hope readers find Unsettled a ripping good yarn with short chapters, complex characters, lyrical writing and plenty of sex and drama. The novel includes the suicide of Australia’s iconic colonial poet Adam Lindsay Gordon who, in real life, rode steeplechases with the Lynch ancestors. As part of the 150th commemorations of his 1870 death, I read several Gordon sections of my novel online.

In her speech to launch Unsettled, Hannah Kent, author of Burial Rites (2013) and The Good People (2016), describes it as a: “…truly modern novel, a beautiful work of historical fiction…Running parallel to Rosanna’s story lies quiet but compelling commentary on the persecution, dispersion and death of the Boandik; the negotiation of new Irish-Australian culture and identity; and the struggles of colonial women.

“The unsettled South Australian frontier near Mount Gambier is a strange and difficult place for a Galway family trying to make sense of the new world. Rosanna and brother Skelly long to escape. Their older brother Edwin races against poets in steeplechases and schemes over cattle, carts and cards to get ahead.

“They are all half in love with a visiting priest and a disturbing Irish play about their ancestors. When she goes to work at a nearby station, Rosanna is caught up in a string of events – throwing a horse race, the allure of a visiting actor, violent threats to her Boandik friends, and the wreck of the Admella – that lead to a reckoning with the land, its histories, its religions and its ancient and recent cultures.

“Unsettled is fearless and exuberant, playful and erudite, an Australian classic in the making.”

The novel draws on apocryphal Galway Irish narratives, often violent – Hanging Judge Lynch of Galway, Cuchulain and the Red Branch of Ulster, Edward Geoghegan a Trinity medical student cum-playwright, and those of my husband’s Galway Lynch ancestors, settlers on the frontier of Australia - and explores their impact on family identity.

If readers would like to dip their toes in first, try the prequel story set in Woodford, Galway, the Lynchs’ setting-off place: A Good Girl from Graigh na Muilte Iarainn.

Frances Devlin Glass, editor of Tinteán, the Australian Irish Heritage Network’s online magazine, wrote: “This is a novel that breaks new ground in Irish Australian fiction. It is successful in giving its main protagonist a voice and a reality that history has occluded, and it inscribes a grounded believable history and a particular place in Australia, south-east South Australia, in fresh ways.”

I recently interviewed bestselling Irish-Australian author Monica McInerney and we shared the challenges of writing through a pandemic whilst separated from family, in her case and mine in both hemispheres, grieved over the tragicomedies of global leadership and the profound change we may have brought on ourselves, ignoring the plight of our planet and rendering it barely habitable.

Our human spirit refuses to be stilled and looks to music and theatre, art and books for solace. Some governments now consider arts practice expendable, its practitioners redundant.

Vladimir: …We could start all over again perhaps.

Estragon: That should be easy

Estragon: You can start from anything.

Vladimir: Yes, but you have to decide.

Unsettled by Gay Lynch is published by Ligature. It is also available as an e-book. Lynch teaches creative writing and English at Flinders University.