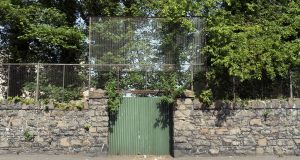 Over the course of the last 35 years, renowned Belfast photographer Frankie Quinn has documented change and stagnation. He believes that subjects and life ran from one into the other. “My experiences are raw. I’m from here. My work comes from the community and I can’t separate daily existence from the political stuff. It’s all intertwined.”

This month marks the 50th anniversary of Operation Banner, the four-decade deployment of British troops in Northern Ireland, an event intrinsically linked to the dawn of the Troubles that same year.

Against this historically significant backdrop, a new exhibition of contemporary images, produced by Quinn and entitled Cordon Sanitaire, will open at the Belfast Exposed photographic gallery on September 6th, almost half a century to the day since the completion of the Troubles’ first peace wall.

It is these structures upon which Quinn has periodically trained his gaze for the last 25 years, their mere presence, along with the political calculations behind them, wields an ugly symbolism in the North. Indeed, in his estimation they “represent a failure of politics at a basic level”.

Belfast, of course, sits at the heart of this peculiar phenomenon. Away from the vibrant city centre, it still carries the scars of a turbulent past. Hulking peace walls, comprised of steel, brick, concrete and barbed wire – built to quell discord rather than promote harmony – slice through working-class districts already partitioned by tribal affiliations.

Quinn saw the trappings of the conflict up close. He is a native of, and still resides in, Short Strand, a nationalist enclave on the edge of east Belfast, sandwiched between the site of the once mighty Sirocco Works and the overwhelmingly Protestant neighbourhoods that powered Harland & Wolff during its roaring heydays. Subject to a barrier for decades, this distinctive ward was virtually sealed off following interface violence in 2002.

'At the end of the day, walls don’t work. When you cut people off from each other there’s no interaction'

With an unswerving dedication to the truth of real life – good and bad, bold and dull – Quinn photographed the Troubles as a freelancer, frequently juxtaposing the detritus of political strife with the mundanity of lives lived in, around and between it.

“Because I’m from the Short Strand, the peace lines affect my life on a daily basis,” he says. “That’s how I got the idea to start photographing them. I wanted a longer-term project. The peace lines were an obvious choice.”

With an eye to these looming constructions, he describes “the good work happening on the within communities, talking about taking them down. I mean, in the last three years, three have come down. There’s great symbolism in that.”

On the other hand, given Northern Ireland’s ongoing political impasse (the post-1998 power-sharing Executive collapsed in January 2017) and the lack of progress in dissolving remaining pockets of entrenchment, the phrase “longer-term plan” seems somewhat apt.

“I constantly get asked about when the walls are coming down, how long they’ll stay. I’m not being pessimistic but some of them will be here for a long time to come,” says Quinn. “I’ve gotten used to it, but it’s definitely not normal.”

Some locals even wish for the barricades to be enhanced, he says. “They want their children to feel safe and you’ll find that on both sides of the line. That’s another factor thrown into the pot of reasons why they won’t be taken down. In the near future, anyway.”

Having studied them for decades, Quinn, nevertheless, is cognisant of how divisions scuttle progress. “You’d think people learned their lessons,” he says. “At the end of the day, walls don’t work. When you cut people off from each other there’s no interaction. How can you expect them to get to know each other if there’s a 30-foot wall there?”

And what of the effects on those surrounded by them? Do good walls good neighbours make? “You’re constantly reminded of what happened here and where we’re going. It does make you claustrophobic and it makes you feel unwanted” he says.

In that respect, the exhibition’s title is ripe with meaning. A cordon sanitaire seals off an unclean zone from the rest of the populace. It also describes measures used to staunch the spread of ideas deemed unwelcome or seditious. “Control and containment,” as Quinn puts it.

Peace lines, while mainly concentrated in Belfast, are all, strictly speaking, temporary. They would spring up from Derry to Lurgan and Portadown. Their numbers topped out at over 100; there are now 48. The surviving sites form key points on the tourist trails these days, though, as Belfast Exposed director Deirdre Robb suggests, visitors aren’t looking on in admiration.

“People are shocked by them. They can’t believe we’re still divided. I think there’s a real sadness about that,” she says. “The peace process is not linear. Outside of Northern Ireland, people might think things are fine here. These walls remind us that they’re not.”

Belfast Exposed was established in 1983. It sought to portray Belfast as more nuanced than mainstream media headlines would suggest. Quinn’s work stands out for its contribution to that effort.

“I think this is going to be a defining show for Frankie. He’s bringing it back to what it was. Belfast Exposed started in response to journalists coming over and painting a negative picture. Community photographers displayed the other sides of Belfast, the positive sides,” she says.

“There’s lots of amazing things about this place: our survival, our tenacity, our humour. That’s what I see in this work. I think he’s at a moment as an artist.”

'We were all witnesses but I’m one of the ones who took a camera out to try and record it. I don’t know what it is, a need or a desire. But, for me, I had to record it for myself'

Quinn’s photographs are remarkable in their clarity. They depict, in stark terms, the reality of these often horribly fascinating monoliths, grim artefacts of a bygone age. Some of the bulwarks are neatly maintained; others are graffitied, corroded, weather-scarred. In his framing, they stand watch, glowering and unmoving, even as the landscapes around them shift and evolve. In their current state, the lines serve as decrepit reminders that time passes more easily than the elements which define it.

Long a disciple of monochrome, Quinn’s latest project has required a fresh technical approach: “I’m shooting in colour because it needs colour to convey something that black and white can’t. What I’m trying to convey is the passage of time and stasis. Colour can do that far better. I want to see that colour green. I need to see the rust, the decay, the plant colonisation.”

One wonders whether his occupation has granted him a privileged insight, enabling him to bear witness for those who could not. Quinn describes himself as nothing more than humble chronicler of momentous events. “I’m definitely a witness,” he says.

“We were all witnesses but I’m one of the ones who took a camera out to try and record it. I don’t know what it is, a need or a desire. But, for me, I had to record it for myself. I was living through these times. They needed recording.”

Inside the dark web: ‘The truth is there is a lot of evil out there’