Simulacra: Carving out unique passageways into the past 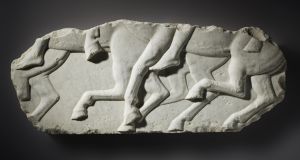 Oliver Sears is candid in acknowledging that the ongoing transformation of Molesworth Street prompted his decision to move to his new location, not that far away, in Fitzwilliam Street Upper. The gallery now occupies a Georgian basement instead of two storeys of gallery spaces in the handsome building close to Buswells previously occupied by Ib Jorgensen. Faced with an unsustainable rent increase driven by the market in general, and perhaps the Molesworth boom in particular, Sears felt he had no choice.

Another factor, of course, is that the contemporary art market has never recovered to anything like pre-recession levels. Any gallerist, indeed any artist will tell you that they are dealing with a new and perplexingly unpredictable reality. Ireland is a small market and gallerists, supported by Culture Ireland, have invested time, energy and money in looking further afield. London-born, Sears has been especially energetic in that regard.

Rather than following the art fair route, which is expensive and, again, unpredictable, Sears has created exhibitions, usually working with partners, in carefully chosen venues in London and New York. He is also active in the secondary market, matching artworks with clients, be they individuals or corporations.

The existence of commercial contemporary art galleries is taken for granted in cities of any real scale in Europe and North America. But it has always been a fraught business, and when you think of it what they do is remarkable: sustaining a schedule of exhibitions, for the most part curated, installed and maintained to a very high standard, all free of charge for the visiting public. With the added benefit of branding, and in the context of a busy, thriving art market, that might just about make economic sense; otherwise, no.

With his new gallery, Sears has tweaked this model. Jason Ellis’s Simulacra is the inaugural show in the new space. The gallery itself is modest in scale, and it is fitted out to allow varying display options. One option it’s designed to avoid is hammering nails into the wall for each new show. Instead, shelves at two levels run around the walls, an arrangement often found in rooms equipped for the display and easy rearrangement of work for potential clients.

That is substantially the direction Sears is taking. He plans on scaling back on temporary shows. Beyond the devoted gallery space is his office, lined by well-stocked bookshelves, and with a broad selection of art on the walls. The plan is that while shows are running, the gallery will stick to regular opening hours, but otherwise access will be by appointment.

Jason Ellis is a good choice for an opening show. His work could be described as a dialogue between past and present

At the same time, he is actively pursuing another strand of the gallery’s programme, arranging exhibitions beyond the immediate gallery space, most recently exemplified by In Living Memory, a residency at Emo Court in Co Laois in co-operation with the OPW, with work by close to 40 artists on view during the summer months. It’s comparable to the OPW’s projects with Mark St John Ellis at Rathfarnham Castle and Farmleigh.

Jason Ellis is a good choice for an opening show. His work could be described as a dialogue between past and present. He is that relative rarity among sculptors: a stone-carver. More than that, when he’d completed a sculpture degree in Chichester, he embarked on training as a sculpture conservator and worked for some 20 years as a conservator, mostly in Ireland. He has devoted his energies to his own work since 2006.

His technical abilities are exceptional. It’s hard to think of a more physical material and process, but his pieces have an almost disconcerting lightness – they seem to flow into being.

Presumably given his extensive experience as a conservator, he has consistently drawn on classical works, and he has consistently conceived pieces in terms of fragments. Such is the case in Simulacra. In a series of 12 relief carvings in several different kinds of stone, he revisits a number of celebrated stone reliefs. The catalogue note mentions the Parthenon (a detail of horses in motion), the Antiquities room in the Louvre and the work of Donatello.

You will also find the Clonfert Mermaid, her Greek sister, a dramatic hunting scene from Nineveh, a guest at the Feast of Herod covering his eyes and recoiling as Herod is presented with the head of John the Baptist and – another Donatello – an angel attending the dead Christ. It becomes clear that Ellis is sifting through a wealth of material in search of motifs that have a general power and relevance. That may make it all sound a bit too premeditated. It could well be that the process is instinctive rather than conscious and calculated.

His pieces embody a succession of differing modes of representation and different levels of sophistication. And he uses different stones, including Carrara marble, Kilkenny limestone, Portuguese limestone and Persian marble. Despite all these variations and divergences, he manages in the series to develop a sculptural language that addresses a range of common human experiences, a thread running through time, geographical locations and cultural perspectives. That’s impressive, as is the fact that each piece is distinctively beautiful in itself.