Visual art round-up: The best exhibitions to see this week 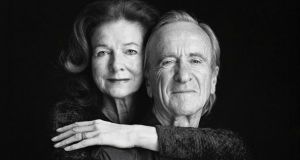 Amelia Stein, Portrait of Rosemarie and Seán Mulcahy at the Butler Gallery

Until October 29th butlergallery.com Engineer and artist Seán Mulcahy and art historian Rosemarie Mulcahy (née Scully) were active, well-known and popular figures in Irish art for many years. Rosemarie died suddenly in 2012 and Seán died last year. In a cultural bequest, the Butler received a group of works from their art collection and it is on view until the end of the month. With pieces by Hughie O’Donoghue, Basil Blackshaw, Eilis O’Connell, James O’Nolan and many more.

Until December 1st customhousestudios.ie Author of an extensive study of the artist, Garrett Cormican curates a compact survey of the work of renowned, Achill-based painter Camille Souter, a major figure in Irish art for many decades. Plus sculptural pieces by her late husband, Frank Morris.

Until November 29th oliversearsgallery.com The inaugural show in Oliver Sears’ new space features recent work by virtuoso stone-carver Jason Ellis. The 12 included works draw on some of the most celebrated stone reliefs in art history, including pieces found in “the Parthenon, the Antiquities room in the Louvre and Donatello”. The vivid clarity of Ellis’s carving belies the fragmentary, eroded nature of the venerable sources and recalls the moment of their creation.

Until November 16th   Under the auspices of Imagine Arts Festival, a celebration of the work of Rosemary Higbee, who was born in India in 1923, spent the second World War years in England and settled in Waterford in 1973 (her family were from Gracedieu). Perhaps influenced by her early years in India, her vivid, modernist compositions are highly coloured, with great luminosity. When working she used “brushes, palette knives and fingers”. Plus other visual arts events, see imagineartsfestival.com