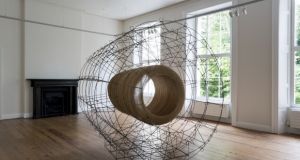 a consequence of – a breather of air

The second iteration of Maud Cotter’s three-part project (it began in Limerick and the next stage is Dublin). Cotter’s speculative forms prompt us to look again, to question our habitual ways of approaching the world as consumers and reconnect as conscious beings encountering the richness of things without preconceptions.

Gwen O’Dowd’s paintings and prints are infused with elemental energy, often connecting with nature while standing warily back from landscape conventions. If her visions of land and sea, time and tide tend towards the sublime, they also view nature as something wholly itself, rather than a reflection of divine power. She’s never professed a conservationist agenda, but one feels it is implicit in everything she’s done.

Ronnie Hughes once remarked that he’d rather be described as an artist than as a painter. It’s true that he primarily makes paintings, but as a means of processing his endless curiosity about the world, the world of things, ideas, systems, theories, fashions and whatever else. And in many ways his terrifically inventive paintings are worlds in themselves, open to our perusal and interpretation.

Painter and printmaker Norman Ackroyd has worked a great deal in Ireland. Landscape and the sea are his subjects and, as you might expect from a professor of etching, his technique is exemplary, but never so that it becomes intrusive. His precisely observed watercolours and etchings are made with a light touch.

Kevin Mooney’s work stems from his interest in the histories of the Irish people who migrated to the Caribbean in the 17th and 18th centuries, and in the cultural activities of migrants in general. On Tuesday, October 29th, at 1pm, the artist will be in conversation in the gallery with artist and writer Austin McQuinn, discussing the evolution of his ideas and methods.

Saoirse Ronan: ‘I can go anywhere. I have a lovely place to come back to’
8

John Hume: the politician who made peace possible
Real news has value SUBSCRIBE