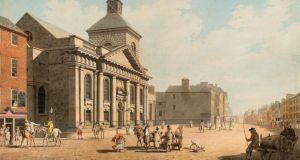 What is it?
St Catherine’s, Thomas Street, Dublin is a watercolour by James Malton. In 1791 Malton made a series of topographical drawings that formed the basis for his celebrated set of views of Dublin, 25 in all, in etching and aquatint, which he made in London and published first in sets between 1792 and 1799, and then as a bound volume, A Picturesque and Descriptive View of the City of Dublin. The watercolours relate closely to the drawings and prints but are larger and differ in incidental detail.

How was it done?
Malton arrived in Dublin with his father and worked as an architectural draughtsman for James Gandon during the building of the Custom House. He was dismissed, for reasons that are not precisely clear, but presumably not for lack of ability. His topographical drawings are accurate and precise. And he did make the prints himself. He used Indian inks as well as watercolour for the group of works that includes St Catherine’s.

Where can I see it?
Several of Malton’s watercolours feature in the National Gallery of Ireland’s exhibition Drawing Dublin (which opens today at the NGI’s Print Gallery, where it runs until August 26th, with free admission), curated by Anne Hodge and Niamh MacNally. The show features more than 70 works on paper from the gallery’s extensive collection, charting artists’ responses to the changing city from the 1690s to the 1960s. Among the artists whose work is included are Sarah Purser, Michael Healy, Michael Angelo Hayes, Flora Mitchell and Harry Kernoff.

Is it a typical work by the artist?
It is a very typical work. Born in 1765, Malton was the son of an architectural draughtsman, Thomas Malton, who recommended his son to Gandon. Whatever the reasons for his dismissal – Gandon complained that he betrayed official confidences and committed other irregularities – he was clearly an industrious worker with a keen interest in architectural history and developments.

But he faced disappointment in Dublin, not only losing his post with Gandon but also failing to win a position as head of architectural drawing at the Dublin Society. He regularly exhibited architectural drawings at the Royal Academy in London from 1792. Although his architectural drawing was excellent – he published a work on perspective – he recognised his limitation when it came to the human figure, and he is known to have enlisted the help of others.

Incorporating most of the city’s major buildings, Malton’s views, in their neutrality and exactitude, form an invaluable historical record. Although he made all of his source drawings in 1791 he claimed that he returned to check on changes before particular etchings went to print. The etchings have been endlessly copied and reproduced and have become extremely familiar, to the extent that they are synonymous with the city. Malton died in 1803.