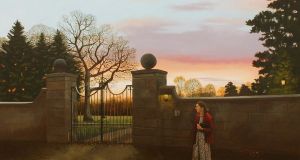 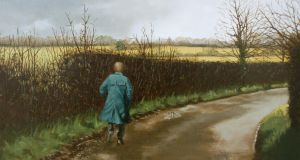 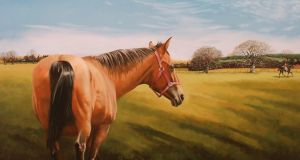 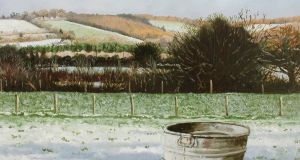 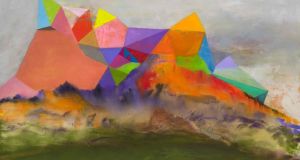 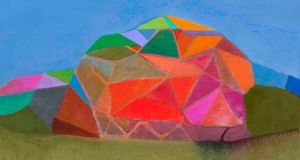 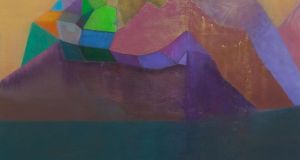 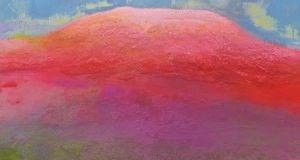 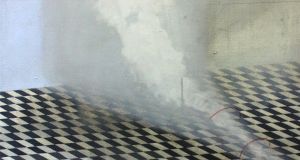 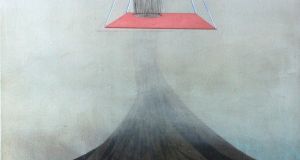 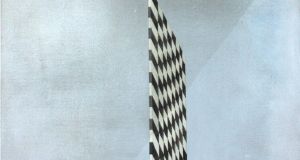 There’s usually an air of slight unease to Martin Gale’s landscape paintings. This unease is often noticeable in the way human figures, when they appear lingering in laneways and fields, are in the landscape, but not of it: they are preoccupied with their own concerns, their own diversions, their memories and puzzles, always at an angle to their surroundings. But it is also apparent in the way that the landscape is never quite at ease with itself, whether because of human intrusions, such as barbed wire fencing, or clumsy architecture, or forestry, or because Gale is drawn to landscapes that, for all their beauty, are not altogether comfortable.     They don’t accord with the conventions of the picturesque or the pastoral. The rainwater pooled in rutted tracks looks as if it is freezing and would drench your feet. There’s often a bite in the air. The limbs of wintry vegetation are spiky and likely to scratch you. It has rained heavily recently and might rain again at any moment. It snowed overnight, but just enough to spread a tenuous, patchy skim of icy white across the muddy ground. You get the picture. Which is that Gale paints what is it like to be in rural Ireland, rather than looking at an idealized version of it.     That reflects a shift in his own life. He has remarked that, before moving out of the city, he painted “urbanised landscapes”, works that had a more lyrical, allegorical air. One painting, Harrier, in his new exhibition, Bloodlines, to some extent refers back to that earlier phase. A crouching hare looms in the foreground, dwarfing an athlete running by in the distance. In general, even with elements of allegory and narrative, his painting is autobiographical in that it represents his immediate world: where he is, the people around him, the wider environment.     Bloodlines is in itself an autobiographical reference, to his family background in an equestrian world. He and his brother are the first generation “to not be involved with riding, racing, breeding, showing or backing horse”. Their father was a National Hunt jockey; their grandmother was an equestrian painter. Though at home in the country, Gale has always felt at one remove from the horse world. He alludes to it here with several straightforward and very capable studies of horses, drawn from reality and art history.     Other animals also take centre stage or play supporting roles – the aforementioned hare, a heron, crows, a magpie (One for Sorrow). Still, those mildly displaced human characters dominate. In The Appointment, a slightly ill at ease woman, formally dressed, waits outside a rather grand entrance in the dusk. Is she waiting to be let in, or awaiting a lift? It doesn’t matter. The painting hinges on the uncertainty, the edginess that is central to Gale’s enterprise. Similarly isolated figures in remote settings – searching out an old family home in one case, while observed by curious locals – appear in several other substantial works, all superbly realised, all with a certain retrospective air. In all, the work makes up an exceptionally rounded, satisfying exhibition and is, incidentally, a fine survey of Gale’s achievements to date.

One of the works in Tom Climent’s exhibition Aspect is titled, perfectly, Magic Mountain, evoking Thomas Mann’s classic novel of ideas. The main protagonist’s seven years spent in a sanatorium in the Swiss Alps, high above the “flatlands”, opens up a world of infinite speculation and possibility, before an ominous return to conflict below. Mountains are the dominant motif in Climent’s paintings, which are built around the meeting of organic and geometric forms. The latter mostly comprise brightly coloured, geodesic dome-like constructions, angular peaks that seem to grow from or are smoothly incorporated into natural masses.     The idea of construction and bold colours encourage a playful, inventive reading of the imagery, as though we are looking at ideas in the form of building blocks. Climent manages to set up this framework without being too illustrative about it, so that he allows space for the viewer’s imagination to dream or even soar, like Mann’s Hans Castorp when he arrives in the mountains. It’s Climent’s most successful synthesis of abstract and representational elements to date and is an important show for him.     Gillian Lawler, likewise, combines geometric patterns and organic textures in her meditations on order and chaos. While she mentions recollections of her childhood home in rural Co Kildare, a cherished place consigned to the past (the show’s title, Hiraeth, being, she says, a Welsh term for the longing for such a lost haven), her elegantly composed paintings extend to a wider consideration of place, organisation and transience. Her project eminent domain dealt with these ideas in terms of a dramatic example: a Pennsylvania mining town that turned out to be standing on a burning coal seam.     That entropic sense of order precariously poised on a rising tide of disorder characterises her fine-grained arrangements of grids, fault-lines, slippages, extreme perspectives and smoke plumes. It’s a visual language that is rich in associations. She manages to suggest great scale – shifting tectonic plates, the earth’s atmospheric envelope – without making vast images.