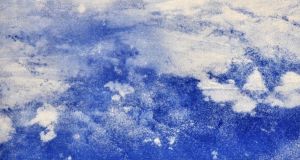 ‘Between water and clouds’, woodcut by Jelena Sredanovic

It’s become the norm at the Galway International Arts Festival that, when it comes to the visual arts, the main talking point is the venue. This year is no exception. The Festival Gallery has found a home in a surprisingly, even disconcertingly capacious building hiding in plain sight just off William Street. More than a little money and effort have gone into making the site fit for purpose, adding another chapter to its history of varied uses.

The purpose, incidentally, is to house Australian sculptor Sam Jinks’s hyperrealist sculptures of the human figure. It does so with room to spare. The pieces are arranged as a series of theatrically lit vignettes in a relatively dark space. Amalgams of “silicone, fibreglass, resin, ‘human hair’” and fabric, the sculptures draw particularly on classical religious iconography, offering contemporary reworkings – usually with a twist – of the Crucifixion, the Pietá, the Deposition, the Madonna and Child and the Annunciation. The latter features an angel with golden wings, apparently delivering an environmental message.

The figures are highly realistic technically, which never fails to engage an audience. You can admire, even wonder at, the technique, but at the same time the sculptures are unreal, as if something isn’t right, and the uniformly reverent tone feels a little emotionally coercive. The show’s title, In The Flesh, is recycled from an exhibition in Australia some years back, which featured hyperrealist figurative work by 10 contemporary artists, including Jinks and two close artistic relations, Patricia Piccinini (who previously featured at the Galway festival) and Ron Mueck. Over the years the festival has been endlessly resourceful at finding and fitting out gallery spaces. The hard bit is consolidation. Commercial priorities have generally prevailed and the festival has successively lost control of and access to its hard-won venues. Which means that other arts events, such as Tulca, have lost out as well.

The William Street building harbours great potential extending well beyond visual art, and the location is choice. There are rumblings in the local arts community that this time will be different, and the 2020 cultural marathon, with an appetite for venues, is fast approaching, but, on past evidence, who knows?

So it is that peripheral venues have long assumed an anchoring role for the festival, prime among them being the Galway Arts Centre on Dominick Street, which habitually produces a high-concept, meticulously installed exhibition that parallels or complements the bread and circuses of the mainstream festival fare. This year, Making Space, with work by Chloe Brenan, Jane Cassidy, Louise Manifold and Treasa O’Brien, reflects on astronomical research.

The artists interacted with researchers at NUI Galway’s Centre of Astronomy and the project was supported by the Royal Astronomical Society’s bicentennial programme. Several pieces reflect a sense of wonder at those infinite spaces so richly populated by stars. O’Brien has produced a feminist sci-fi fable in film, about a post-apocalyptic future planet run on maternal principles.

Slightly further afield, GMIT’s Cluain Mhuire campus performs a similar function with imPRESSions, the open printmaking biennial. This year’s adjudicator is Ian Ritchie, best known for The Spire, aka The Monument of Light in O’Connell Street, Dublin. Cluain Mhuire has a strong identity in printmaking, not least thanks to Sioban Piercy, and the prints occupy the out-of-season rooms and corridors happily enough. At the same time, they deserve something more in terms of the display and shaping of the exhibition. The presentation is fairly desultory, though given the constraints of the location it is difficult to conceive a more adventurous approach.

There’s no shortage of fine work here: the list of exhibitors is close to a who’s who of Irish printmaking, plus international names. Something of the scale and scope of David Ferry’s Running Around the Stones is a welcome surprise, but many other riches are evident as well, by Mary O’Connor, David Lilburn, Niall Naessens, Leah Beggs, Daniel Lipstein, Ruth O’Donnell, Breda Lynch, Margo McNulty, Eileen Ferguson, Kathleen Furey (who also has a fine solo show in the Town Hall Theatre), and Piercy herself, to name but some, and there is a beautiful, standout woodcut by Serbian artist Jelena Sredanovic. Given a good exhibition space closer to the centre of town and some careful design, this would be a major event.

Then there is the compact 126 gallery, where Reforming brings together Diana Copperwhite and Ciara Barker. While their approaches are quite different, what they have in common is an interest in constituting a picture, in the sense of a coherent representation of a subject, drawn from a complex mass of experience and information. But for both, coherence is elusive, and that is partly the point of their work.

In her installation, Barker looks at the process of assembling an image of the body, trawling a vast repertoire of exemplary material and allowing for multiple possibilities. Copperwhite, long interested in how we remember, accumulated a battery of moving images from the smartphones of collaborators, then used the imagery to produce a compressed, static composition based on the shapes, colours, rhythms and oddities she encountered on viewing it. Printed – on vinyl? – this makes a dynamic, large-scale mural.

The Kenny Gallery, latterly out in Liosbán, is another consistent venue. There, Gathered from the Earth highlights the work of basket maker Joe Hogan, who employs a range of natural materials, from birch twigs to lichens, as well as the traditional willow, in his baskets, both functional and sculptural.

NUI Galway has consistently provided venues, though visual art has been a movable feast within the meandering, far-flung campus. This year the O’Donoghue Centre hosts a small cluster of shows, with the Aula Maxima as the logical venue for the First Thought Talks strand. Alice Maher and Aideen Barry’s collaborative film 6Skin, which will certainly find other screenings, Sarah Hickson’s work-in-progress documenting the realities of life in direct provision in Galway and Annlin Chao’s dizzyingly protean fusion of animation and live action in her playfully metaphysical The Paralleled Mind all found a temporary home on campus.