Selfie-obsession: Are selfie-takers vain or just trying to connect?

Taking selfies can put your life at risk, but they can be a healthy form of expression 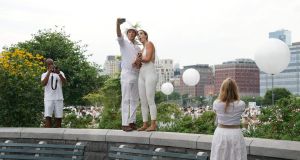 People pose for a selfie at the pop-up ‘Diner en Blanc’ event at Nelson Rockefeller Park in Battery City, New York on Wednesday. From 2011 to 2017, more than 250 people died while taking selfies. Photograph: Timothy A Clary/AFP/Getty Images

Earlier this month, when earthquakes rocked southern California on back-to-back days, for some it was a visceral reminder that the region may one day experience a quake with the power to kill and destroy.

A few people saw something else: a photo opportunity.

Tourists flocked to a large crack in a highway to see evidence of the damage for themselves and, of course, take a quick selfie.

It was the latest example of how our modern love of sharing photos we take of ourselves in notable situations is colliding with nature and the world, often in perplexing and even dangerous ways.

In Canada, a sunflower farm barred visitors last year after selfie-seekers destroyed flowers and left the land looking like a “zombie apocalypse”. In Spain, a man was gored in the neck last weekend while trying to take a video selfie at the annual running of the bulls in Pamplona.

The selfie phenomenon entered the mainstream after Apple and other phone-makers added front-facing cameras starting in 2010. From 2011 to 2017, more than 250 people died while taking selfies, according to a study by researchers in India, which had by far the highest number of such deaths, followed by Russia and the United States. Many died after drowning, falling or being attacked by an animal. Most were under age 30.

All of it paints a picture of a self-obsessed online culture hellbent on getting the perfect shareable photo to feed its vanity. It’s easy to be uncomfortable with selfies and even mock them, especially when they’re risky or in bad taste. But some researchers have explored different questions: Why do we take selfies? Can they ever be a healthy form of expression? Can selfies be used for good?

“Narcissism is one thread,” says Jesse Fox, an associate professor of communication at Ohio State University, who has studied how people use selfies and social media. In one study, she found that characteristics of narcissism and psychopathy predicted the number of selfies men aged 18 to 40 posted on social media.

But she says the need for social approval and support is universal.

“We all have levels of insecurity,” Fox said. “When someone is like, ‘Here is my cancer selfie,’ you are feeling vulnerable right now. You need that social support. That is not saying you are a narcissist for putting it out on social media.”

Since the term “selfie” first caught on – it was the Oxford Dictionary’s word of the year in 2013 – researchers have identified three types of selfie-takers.

There are communicators, who want to have a two-way conversation (for example, a post with an “I Voted” sticker to encourage civic engagement); autobiographers, who document their lives for their own purposes, rather than seeking feedback or compliments (a selfie at home with a favourite coffee mug, or a photo at the Grand Canyon); and self-publicists, who want to build a brand and positively curate an image (à la the Kardashians).

“They have become so common that my grandma does them when we get together,” says Steven Holiday, an author of the study who argues that the notion of the selfie as narcissistic is outdated.

“We have gone beyond the self-centred nature – we need to let it go when it comes to selfies,” he said. “Selfies are a way for us to connect and communicate, and feel more personal with people all around the world.”

In one example, researchers developed a #ScientistsWhoSelfie campaign studying how scientists posting photos of themselves with their work on Instagram influenced public perception of the profession. They found that photos with human faces helped improve impressions in a field that is often subject to negative stereotypes.

While some scientists baulked at first, fearing that their colleagues would consider them self-centred or think they take their work less seriously, those concerns dissipated once researchers explained that it could help build public trust.

Similarly, Fox has studied how self-documenting on social media can be a powerful tool for gay, transgender and non-binary people who are undergoing an appearance transformation to live more publicly as their true selves. The public nature of the posts, she said, can be a cathartic form of self-expression. “That is a very empowering thing for them,” she says.

So feel free to selfie – just watch your step.