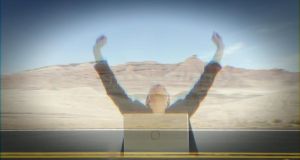 MICHAEL ROBINSON: DUST IN THE WIND
★★★★☆
Brown & Ó hUiginn Galleries, RHA Gallagher Gallery, 15 Ely Place, Dublin Until January 26th rhagallery.ie
Michael Robinson’s two big-screen video installations in his exhibition Dust in the Wind occupy the Brown and Ó hUiginn galleries in the Royal Hibernian Academy. Bordered by curtains, to keep the outside light at bay, the show is adjacent to Futures, the terrific showcase for emergent artists. Still, find your way through those curtains, adjust to the cinematic sound and flickering projected light, and in many ways Dust in the Wind feels like the future.

That is partly because the raw material from which Robinson’s work is fashioned is drawn largely from the oceanic expanses of digital sound and imagery, a virtual world containing an incalculably vast mass of stuff; it sometimes feels like everything ever committed to tape, film or video is floating around out there, and artists have certainly noticed that. Then, people spend more and more of their time in this other virtual world; it’s part of everyday experience, and cannot be ignored.

Robinson, who is based in Los Angeles, completed a two-year MFA at the University of Illinois. He went there with the intention of working with video, he explained in an interview in the Brooklyn Rail. “I spent a lot of those years staring at a TV, playing video games, or watching the same movies over and over again on degrading VHS tapes.” The physical character of the medium as it degrades is important to him, one would guess, as he continually emphasises a certain instability in the image, any recorded image and sound, underlining the fact that we are looking at a spectral, mediated version of the world.

While not quite explaining the ambiguous title, Onward Lossless Follows, Robinson indicates that the Follows is intended in the social media sense of following someone on Twitter or Instagram, say, rather than physically or temporally. The echo of Onward, Christian Soldiers is amplified when we hear the preacher, whose urgent but rambling and, really, nonsensical sermon Robinson stumbled across online – needless to say, there’s a complete archive of his preaching from several decades back. Add the various other elements and segments and what you don’t have is a narrative, though you do have at least two potential narrative strands. While they don’t exactly join up there is something like a narrative flavour.

The aura of the desert, for example, plays a significant role, with perhaps a suggestion that the extremity and strangeness of the desert affects people in odd ways. Witness footage of women transported into a state of, what? Religious fervour? As they gaze at their laptop computers. Against the preacher’s bitter tirade there is, mostly conveyed via text messages, a blossoming relationship between two women. Irrational but life-affirming passion set against the preacher’s relentless negativity?

Perhaps, though it does get more complicated and diffuse, involving, for example, workers in woodland and the hoisting of an injured horse, to the strains of A Horse With No Name. Robinson’s basic way of working – collage – is instinctive and necessarily indirect. He stitches together pieces of narrative fabric, not to make a conventionally coherent narrative, but something else. It’s not unprecedented. Walter Benjamin proposed making a book consisting entirely of quotations from other works in The Arcades Project. Guy Debord managed to complete a similar project decades later. But in terms of moving images, video artist Christian Marclay created a masterpiece of collage in 2010 with his astounding 24-hour work, The Clock.

Marclay found clips from myriad films and television programmes in which clocks featured, highlighting specific moments in time, and edited this vast mass of material so that the looped video keeps pace with passing time. Viewer’s could commit to the full 24 hours or drop in an out at any stage, The Clock would keep ticking either way. There’s no connection between the numerous narrative snippets apart from references to the time but, mysteriously, the internal momentum, suspense and anticipation generated are extraordinary and the work is hypnotic.

The Clock comes to mind specifically in relation to the other work in Robinson’s show, The Dark, Krystle, completed in 2013. The piece is much more focused, in terms of its sources and form, than Onward Lossless Follows and indeed The Clock. Robinson has culled footage of just two key characters from the 1980s TV soap Dynasty, the virtuous Krystle, played by Linda Evans, and the wicked Alexis, played by Joan Collins. Krystle endlessly enacts her helplessness and misfortunes with a repertoire of anguished expressions. The scheming Alexis, on the other hand, is forever reaching for a drink as she plots and taunts. Apart from highlighting dramatic tropes it’s a guide to the architecture of 1980s power-dressing and female archetypes. And it is really funny. In the way it zeroes in on a few repeated gestures, The Dark, Krystle also recalls a work by Marclay that seems in retrospect like a study for The Clock. In Telephones, made in 1995, he chose another common cinematic motif, the ringing telephone, and put together an endless succession of phone snippets. Dramatic tension is naturally built into a scene in which a telephone rings.

The Clock, though, is in a league of its own, raising profound questions. Telephones, like Robinson’s work, plays around with the material, in a skilled, thoughtful and revealing way. No small achievement.

6 Welcome to Dublin, unless you're black

9 What links Dido, Grafton Street and the Progessive Democrats?