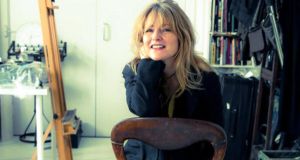 Geraldine Swayne: “I’m so thrilled to have won The Moth Art Prize, I can’t tell you. My mother was from Wexford and she’d have been beyond proud.”

The winner of The Moth Art Prize 2019, run by The Moth magazine, is the Sussex-based painter Geraldine Swayne.

Swayne studied fine art at Newcastle University and in 1990 won a Northern Arts Travel Award to paint and make Super-8 films about voodoo in New Orleans. She then moved to rural France, living as a portraitist and making a series of large outdoor paintings. In 1992 she moved to the UK and became a pioneer special effects designer in London, and later in Los Angeles. She has made numerous experimental films, including East End with Nick Cave, and for 10 years was a member of the artist-initiated band Faust.

She recently exhibited at the Fine Art Society and Turps in the UK, and Aeroplastics in Brussels. Her work has appeared in group shows at the Saatchi Gallery, the Jerwood and the Barbican in London.

“I’m so thrilled to have won The Moth Art Prize, I can’t tell you …” said Swayne. “I’m so happy to be coming back to Ireland. It means a lot. My mother was from Wexford and she’d have been beyond proud.”

Swayne uses a variety of sources, including personal photographs, found images and pornography, to conjure otherworldly narratives and portraits. She deftly deploys materials, from luminously lustrous enamel paint on small sheets of copper or aluminium to large-scale oils and acrylics on canvas, which occasionally swell her characters to more than life-size.

Whatever Swayne’s medium, the qualities of “paint as paint” are emphasised by abstract passages and semi-accidental effects. She seems – through the transformations and distortions wrought by that painterly style – to be probing psychological states. In Club Girls one of the pair’s hands swells as if webbed while the other’s merges with her hair, so transmitting the anxiety they feel to cover their faces.

Not only can we not quite pin down the events we come upon in Swayne’s paintings, but the very painterly qualities which create the surface allure cause the images to depart from normality. This makes for an unsettling undertone uncannily appropriate for the times in which we live.

Swayne will receive €1,000 and spend a week at The Moth Retreat in rural Cavan as part of her prize. Her painting Mask Man features on the cover of the winter issue of The Moth.

“We had more entries this year than ever before, and it was really difficult to narrow the longlist down to one,” said The Moth publisher Rebecca O’Connor. “But while Swayne’s work is obviously skilful and painterly, it also pushes against limitations. It made us feel uncomfortable, which is right, as it engages with and speaks directly of our menacing times.”

Work by Samantha Ellis Fox (UK), Adam Hennessey (UK), Brian Kielt (Northern Ireland), Jennifer McCrae (UK) and Emerson Schreiner (USA) was highly commended by the judges. You can read more about the prize and purchase the magazine online at themothmagazine.com.