Social photography in the age before the selfie 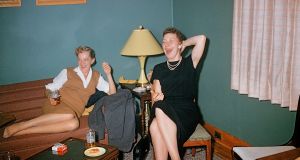 Midcentury Memories includes impromptu instants that position themselves between the memorable and the meaningless. Photograph: The Anonymous Project

Readers of a certain age will remember those visits to acquaintances, sitting in the dark to watch holiday slides flicked across a sitting-room wall. The person at the projector, usually the “man of the house”, dictated the pace by deciding when to move on to a new slide and this could be a slow process. Waiting time was also a factor when you handed in your own roll of film for processing into print copies. It could be a week before the photos were ready to collect. Those you kept were treasured and you still have some of them. Even more precious are surviving photos taken by your parents’ generation, even those taken in poor light with lopsided angles that inadvertently cropped limb parts from pictures of loved ones no longer around.

Fast forward to this century and smartphones with digital cameras become increasingly popular as technology improves the quality of images. By 2006, the year when Facebook was opened to everyone and not just those at university, such phones were outselling all types of stand-alone cameras. With the mushrooming of social media platforms – the launch of Instagram coming in 2010 – smartphones entered a new dimension. The age of the selfie was born.

Midcentury Memories is a visual homage to the kind of social photography that flourished before camera phones and selfies. The photos are part of The Anonymous Project, an ongoing collection of many thousands of slides taken mostly from the 1950s onwards. Colour negatives degrade over time, making digital archiving the only means of preserving this unique source of memory and experience.

Taking selfies is the Marmite of photography, irresistible to some but unpalatable to others

The people who took the photographs are as unknown as those in their pictures but the anonymity is part of what guarantees their authenticity. They were taken to be viewed by family and friends before, in the case of slides especially, being packed away in cardboard boxes to rarely see daylight again. They were not fake news. In the age of Kodachrome there were no digital toolboxes of editing and preening features for reworking images before putting them out on social media. Any detail felt to be a facial flaw can now be masked; appearance can be tweaked in myriad ways that augment reality.

Smartphone software optimises focus and enhances tonal smoothness while selfie apps with their filters provide more paraphernalia for cosmetic retouching than ever found on a dressing table: teeth can be whitened, eyes brightened, lips plumped, waistline trimmed, legs reshaped. If self-respect puts a brake on such blatant manipulation, filters can imitate analogue photography to introduce shadows, fading, blur and other retro features. People can control how they want to be seen by their peers and how they’d like to see themselves.

Not everyone works on their selfies in these ways but when the five most popular Instagram hashtags are #love, #instagood, #photooftheday, #fashion and #beautiful, a curating of the self seems to be part of selfies’ appeal. The act of taking them is allied, if not joined at the hip, to the narcissistic economy of online culture and the commodification of beauty. What also looks to be at play is a by-product of the cult of celebrities, as when when the Danish prime minister took a selfie of herself with Barack Obama and David Cameron. The photo itself was banally orthodox for a selfie but not the situation that occasioned it: a memorial service for Nelson Mandela. What this indicates, if not a drop in the cultural barometer, is an evolutionary step in selfie etiquette.

What the moment at the Mandela memorial service shows is that selfies can be performative acts. For the Danish prime minister, it stated that she was not politically invisible outside of her own country. An element of theatricality inhabits the space of the selfie, with the smartphone often held out slightly above the level of the subject, ensuring primacy of the face. This is me and I throw myself out to the world.

Taking selfies is the Marmite of photography, irresistible to some but unpalatable to others. Smartphone cameras, of course, don’t have to face inwards to those holding them; intimacy does not have to be displayed publicly. We also use them to record family moments and friendships in much the same way as is on show in Midcentury Memories.

Photographing our faces is not necessarily ego-driven and the desire to record our presence alongside those we care for seems a natural one. But it has not always been so. The popularity of selfies says something about our zeitgeist but photography, like any form of representation, is always of its time.

Countless millennia before cameras were invented, Paleolithic artists painted images of human-like but faceless stick figures on cave walls. Megafauna was represented in superb detail so faces presumably could have been shown with equal skill but self-imaging is completely absent.

Only with the Bronze Age and the rise of individual rulers with territorial claims do depictions of the faces of the powerful or wealthy begin to appear. This genre has remained with us ever since. One of the earliest recorded selfies was taken by Robert Cornelius behind his family’s chandelier shop in 1839. Nowadays, courtesy of the smartphone, self-congratulation is available to all.

The pictures in Midcentury Memories are very much of their time. They were taken in an era after the second World War when colour photography started to become affordable for those with secure and reasonably good incomes, mostly in the US. This explains why the majority of photographs in the book are from that part of the globe. It was a Caucasian world – only one black person is in the book – a middle-income and family-oriented one. Many of the pictures are as anodyne as one might expect and there are too many of children (after all, it’s only pictures of our own children that we find interesting) but a number of them are cause for reflection.

Carl Albert Dauthendey observed how people, looking at the first commercially produced photographs around the middle of the 19th century, were at first afraid to look for any length of time at the pictures. They believed, he said, that “the little, tiny faces of the people in the pictures could see out at them, so amazing did the unaccustomed detail and the unaccustomed truth to nature of the first daguerreotype pictures appear to everyone.” This now seems quaint and the fear of looking at pictures of ourselves is well and truly extinct but a sense of wonder is still possible when we look at particular photographs of people.

Taken with a bakelite Brownie or an iPhone 11, a camera can capture that random, temporal spark of chance that touches us with another person’s existence. Social photography can do this at its best, whether in the form of a selfie or not, and Midcentury Memories includes impromptu instants that position themselves between the memorable and the meaningless. It happens with an affectionate moment between a couple in swimwear and again with two women, drinking beer and laughing at something out of the frame. Maybe a comedy on television is amusing them but what we recognise is a warm part of ourselves being experienced by two unknown adults.

An ambiguity inhabits some of them, like one of three young men close together in a way that invites speculation about their relationship. There is a picture of a married couple seated in their minimalist-style, aesthetically pleasing living room, separated by a coffee table with an arty lamp. The man looks direct at the camera, the woman’s gaze ever so slightly deflected to one side; her hands rest down each side of the armchair; one of his is under his thigh, the other also hidden from view. There is a space between them that cannot be measured by the distance between their matching armchairs; Hockney’s Mr and Mrs Clark and Percy comes to mind.

A girl on the beach features on the book’s front cover. Her age is uncertain but not her frank and questioning look as she gazes back at the camera. Dauthendey’s comment about the belief that faces in his pictures could see out at them takes on fresh resonance. Regrettably, it is not so easy to find faces like hers in selfies.