Harper has no problem coaxing subtle nuances of tone and colour from acrylic, and its crispness suits his brisk, darting technique 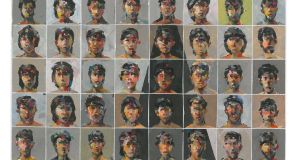 The heads laid out in a grid are variations on a theme, and one is prompted to think “the same but different” of the varied individuals depicted

Randomised Heads is a painting by Charles Harper

It was painted with acrylic, generally regarded as being much less subtle and pliable than oil paint. Unless retardants are used in the mix it is also very quick-drying, which is why it has often been used as an under-painting layer. Harper, a superb technician, evidently has no problem coaxing subtle nuances of tone and colour, and acrylic’s crispness of finish suits his brisk, darting technique. The 64 heads laid out in a grid are variations on a theme, a method he has long employed. One is prompted to think: the same but different of the varied individuals depicted. A composite, triangular form emergent in the background perhaps implies unity, purpose, momentum.

It is included in Charles Harper; A Retrospective at the Limerick City Gallery, The Carnegie Building, Pery Square, Limerick (until January 26th gallery.limerick.ie)

It is typical. Variations arranged in grid-form have been a staple of Harper’s work from quite early on. He was born on Valencia Island during the second World War (his father monitored radio communications for the State), though the family soon moved to Ennis, then Limerick. A quiet non-conformist, the young Harper realised he did not like regimentation but was fascinated by the way it worked to provide the components for a functioning society. Neither left nor right-leaning in his political thinking, he has always prioritised the individual experience in group contexts.

While he was a student at Limerick School of Art and Design, a German animation filmmaker arrived to give a talk. He was looking for capable draughtspeople to train in animation. Harper, not just capable but a brilliant draughtsman, took up his offer and went to Germany.

Animation techniques surely contributed to the development of his work: the multiple image grid arrangements, occasionally sequential, organising variations on a theme, and a fast, graphic mode of representation. Mostly, though, Germany encouraged his inclination towards painting (he visited many museums) and once back in Ireland he continued his studies, this time at the National College of Art and Design.

Offered part-time teaching following graduation, he found himself in the midst of a period of unrest. He and his fellow part-timers were immensely popular with the students and in favour of change, which came slowly, doggedly resisted by the academic regime. In the meantime Harper moved on to Limerick School of Art and Design, eventually becoming director there.  For a long time his work was figurative in the sense of dealing with the dynamics of groups and individuals in groups, touching on many specific concerns, such as hierarchical structures, co-operative effort, hyper-masculinity, agencies of domination or repression, usually with an eye to current concerns. This is done in a fairly cool, analytical vein, and with the underlying suggestion that there is always a tension between the individual and the collective.

He was wary of landscape as a genre until invited by Cóilín Murray to take part in a landscape exhibition. That launched him on a really exceptional, long-running series of paintings with Mount Gabriel in west Cork as their focus. The Burren in Co Clare was equally fruitful as a subject matter.