Bulldozing gracefully through a 21st-century landscape 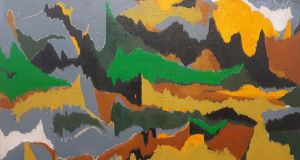 For works that are, more or less, straightforward arrangements of flattish colour on a ground, Kurt Oppermann’s paintings evoke many things, by means of visual resemblance and organisational schemes. In particular, a profusion of jagged profiles recalls the ubiquitous charts and graphs that indicate anything from property prices to global warming to earthquake tremors recorded in the linear tracing of a seismograph. The tight palette of flat colours, meanwhile, is surely related to the four-colour theorem, originally proposed in the mid-19th century, which points out that four colours are sufficient to ensure that, in any map, no two distinct territories sharing a boundary will be identically coloured.

It’s presumably not incidental that Oppermann’s show includes two works titled Atlas (1 and 2). Atlas chimes with the general landscape feeling that comes across. Though it does come across in a non-straightforward way, combining a sense of the earth, nature, the physical world, with those graphs and demarcations and measurements. This confluence, or perhaps it’s a distinction, is cleverly conveyed even in the palette, which divides broadly in two. One branch incorporates natural and earth colours, the other colour with a distinctly synthetic edge, even a touch of fluorescence – that Pink Bulldozer, perhaps, barging its way through nature.

Oppermann manages these various elements very effectively and judiciously. His paintings have a rough, grainy texture, though it is not immediately obvious if this derives from multiple layers of under-painting, or if it is part of a prepared ground. This clumpy quality doesn’t take away from the paintings and may even contribute to their overall character, but it does underline the impression that Oppermann does not have a deft touch in handling pigment. Rather his approach is slow, methodical and careful, if not even cautious. That’s not necessarily a good or bad thing – it’s just the nature of the way he works, and so far he’s doing pretty well.

Artist Diana Copperwhite turns curator for Vision X, a group show that features a diverse band of painters. What they share, an accompanying note suggests, is a certain truculence, a disinclination to play by the rules as they find them, whether those rules apply to figuration or abstraction. So expect work that “teeters on the edge of perception, dreamlike, sometimes awkward abstraction and subversive figuration . . .”

It’s a fair description of what’s on view in, unfortunately, the RHA’s least auspicious space, the Dr Tony Ryan Gallery. Without a doubt the show, good as it is, would look much better, taken as a whole, in more advantageous conditions.

They are trying to negotiate a space for themselves in a compromised, problematic world. Broadly speaking

Copperwhite has managed to gather a formidable group, ranging from relatively young artists to an older generation, including the late, quietly influential Norbert Schwontkowski, the late Joyce Pensato, who died earlier this year, and Thomas Nozkowski, still working strongly away. There are first-rate examples of the work of all three. Schwontkowski’s broodingly atmospheric Liftboy (Hotel Malewitsch) is amazing for its play on scale. Pensato’s Buzzy, a giant pair of startled cartoon eyes, perfectly encapsulates her verve. Nozkowski revisits abstraction with total disregard for its norms and rules.

As with virtually all of the artists in Vision X, Schwontkowski, Pensato and Nozkowski exemplify the position of painters who have lost faith in, or perhaps lost patience with, the grand narrative of modernism, but are equally unhappy with the glib irony of postmodernism. They are trying to negotiate a space for themselves in a compromised, problematic world. Broadly speaking. Things are more nuanced than that, needless to say. Chantal Joffe, for example, clearly has a problem with habitual systems of representation as they apply to women, and has consistently set about reworking them.

Her distrust of received representation is not unusual in the company – Marcus Cope, for one, doubts every image in his paintings. In her own work, Copperwhite has consistently destabilised the image as it is generally formulated in a number of contexts. Eleanor McCaughey has systematically taken images apart in her work, undoing their conventions and the assumptions, codes and rules, cultural and social, implicit in them. Aileen Murphy looks for an alternative way of representing the experience of being. Brian Harte explores the materiality of paint, disassembling the grammar of images even as he makes them, with perhaps a nod to Francis Bacon. Glenn Fitzgerald draws on a language of signs and symbols anchored by appropriated, fragmentary images but promising no coherent, paraphrasable meaning.

Robert Armstrong has long explored representational artifice from different eras with quizzical, lively intelligence. Anna Bjerger takes arbitrary, fragmentary images and uses them to construct visual narratives that pose questions rather than reinforce assumptions. Kristina Huxley takes nothing for granted, devising bespoke strategies for whatever location and conditions she finds; her works are meticulous, unpredictable and often indefinable.

Finally, Danny Rolph remakes abstraction from the ground up, dismantling its language even as he works with it – and he seems to enjoy doing it, which is no bad thing.