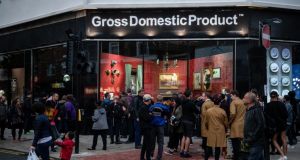 Ahead of a potentially record-breaking auction of his work at Sotheby’s, the street artist Banksy said he had been forced into taking the unusual step of opening his own homewares store in south London following a legal dispute with a greetings card company.

Gross Domestic Product mysteriously opened on Tuesday and is located on the site of a former carpet shop in Croydon. It will trade for the next two weeks – despite never opening its doors – with all sales being made online.

Banksy said the motivation behind the venture is “possibly the least poetic reason to ever make some art”, claiming that the store is a reaction to a trademark dispute. “A greetings card company is contesting the trademark I hold to my art,” he said in a statement. “And attempting to take custody of my name so they can sell their fake Banksy merchandise legally.”

The artist said that he thought the card company was “banking on the idea” the famously anonymous artist wouldn’t show up in court to defend himself.

The artist plans to sell a range of merchandise, which is described as “impractical and offensive” and includes disco balls made from used police riot helmets. Other items being sold in the shop, which will have its lights on for 24 hours a day, include sofa cushions with the inscription “Life’s too short to take advice from a cushion” and a gravestone with “You have now reached your destination” written on it.

Mark Stephens, an arts lawyer and founder of the Design and Artists Copyright Society, called the case a “frankly ludicrous litigation” and is giving Banksy legal advice. “Banksy is in a difficult position,” he said. “Because he doesn’t produce his own range of shoddy merchandise and the law is quite clear – if the trademark holder is not using the mark, then it can be transferred to someone who will.”

Stephens proposed that Banksy begin his own range of merchandise and open a shop as a solution to the issue. The artist says the proceeds will go towards buying a new migrant rescue boat to replace the one confiscated by the Italian authorities.

“Sometimes you go to work and it’s hard to know what to paint, but for the past few months I’ve been making stuff for the sole purpose of fulfilling trademark categories under EU law,” the artist said, admitting the subject matter is “not a very sexy muse”.

Other items for sale include a toddler’s counting toy, where children are encouraged to load wooden migrant figures inside a haulage truck, a clock with a rat illustration and a handbag made from a house brick.

Earlier in the year Stormzy headlined Glastonbury while wearing a stab-proof vest with a Union Jack on it, which was made by the Bristolian street artist who wrote on Instagram: “I made a customised stab-proof vest and thought – who could possibly wear this? Stormzy at Glastonbury”. Replicas of the vest are also for sale in the shop.

On Thursday Banksy’s painting Devolved Parliament will be auctioned at Sotheby’s and is expected to sell for between €1.7 million and €2.2 million, almost exactly a year to the day since his work Girl With Balloon was shredded moments after being bought for over €1 million. – Guardian