In A Love of Many Things, Crowley electrifies rural Ireland 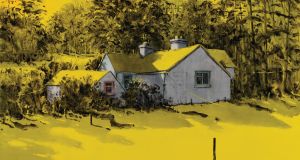 Graham Crowley: A Love of Many Things

The title of Graham Crowley’s superb survey show references Van Gogh (there’s also a New Testament connection), which may seem a bit presumptuous, but is not. Crowley’s generosity of spirit, as artist and teacher, is exceptional. Work included extends back to the mid-1970s, when he was painting big, brash compositions, a kind of comic book cubism, Léger with a shot of punk attitude, as in Head 2. And doing so very well. He has described himself as being stylistically promiscuous, though it’s more accurate to say that he has never completely invested in a signature style, but his standards are uniformly high, and he doesn’t let himself away with anything.

If there is no signature style, a few constants have emerged over the years. They include his use of grisaille – that is, working in shades of grey. And, a counterpoint to that, his liking for bursts of bright, almost fluorescent colour, though usually one colour at a time, the cadmiums, he specifies. The grey in question is an unusually rich one, Payne’s grey (or gray, strictly spelling), after watercolourist William Payne. It’s notable for the absence of black in the mix, lending it exceptional depth and softness.

Not that Crowley is averse to colour. Following his cubist phase he began to make heightened, magic-realist urban scenes, their twisted, labyrinthine spaces and melodramatic lighting recalling the fevered, fantastic character of Piranesi’s celebrated Prisons. Crowley notes that he was responding to an actual environment: London in a state of frenetic decay and rebuilding. During the Thatcher years, these paintings became increasingly responsive to an atmosphere of discord and crisis.

His next move was perhaps his most unpredictable. He made tremendously detailed grisaille paintings, charged with incredible vitality, of floral still lifes inspired by classical Dutch painting. Then he and his wife, Sally Townshend, started to spend time in west Cork, where one side of his family was from (the other was Polish Jewish, he has noted, with a reluctance to acknowledge origins on the part of both his parents, who were keen to assimilate). He had originally visited Cork as a student out of curiosity and was struck at how alternative the scene was around Skibbereen, with a cosmopolitan population of free spirits – “people with quite far-out ideas”.

They eventually opted to live full time in Cork for a number of years, deferred when he took up the job of professor of painting at the Royal College of Art. Although he had a formidable record of visiting lectureships and residencies to his credit, the RCA was his first actual full-time job. It’s fair to say he became disenchanted with the direction art education was taking, and he eventually left his position, just in time, as he saw it, with the emerging dominance of a managerial, academicised culture.

When he wrote about his doubts and criticisms, he found himself in the midst of a public row with John Tusa of the University of the Arts, and didn’t back away from the row. He later elaborated that a teacher of fine art must have empathy above all else, the very quality that was being squeezed out by bureaucracy. The argument, or debate, is perhaps even more relevant today, and empathy is not doing well.

In any case, in Cork he noticed how, in the lush countryside, people tended to paint their houses in garish, startling colours. He began to make grisaille landscape studies laid down on grounds of similarly electric yellows, pinks and blues, and to use isolated bursts of such colours on buildings in settings that were otherwise grey. These landscapes are fascinating, both familiar and strange.

In time they moved back to England but more recently, for various reasons, looked for an alternative to London. They found it in Suffolk, where living and working space were a realistic proposition. Oddly enough it brought Crowley back to the early enthusiasm he had felt for John Constable. They live in “Constable country” now, and he sought out the scene of Constable’s famous The Hay Wain, also known as Landscape: Noon. That painting had been a revelation to him because, until he was in his mid-teens, he was familiar with it only in terms of a muddy black-and-white plate.

When he eventually saw it in the National Gallery he was blown away. Not that he expected it to be in black and white, but he did expect it to be fairly dull. The sheer liveliness of the painted surface amazed him. Constable had tracked the fall of light scattered by cloud across the whole complex composition. Crowley sought out the scene of the painting – not difficult as it is more or less preserved, including Willy Lott’s cottage. The peculiar status of the location appealed to him. It is mythologised, a heritage destination, but it’s also as real as ever, he feels – as real and immediate as it was for Constable.

When Crowley went to study art at St Martin’s in London, against his parents’ will, he did so at a propitious moment late in the 1960s. Cultural rebellion was in the air. There was a sense of limitless possibility, the feeling that everything was open to question and up for negotiation. The possibility of adopting a contrarian position, of regarding orthodoxy with suspicion, led him to commit to painting when conceptual art was in the ascendant. It was, he observes, the non-conformist thing to do. He has never lost that spirit.