Finding our place in the universe: The best visual arts shows to see this week 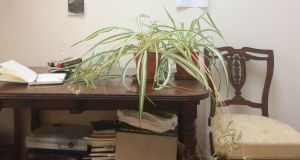 Paul Hallahan: It’s not the worst I have ever looked, just the most I’ve ever cared

Studio 11, Temple Bar Gallery + Studios, 5-9 Temple bar, Dublin Until October 31st templebargallery.com
Paul Hallahan winds up his 12-month residency of a project studio at TBG+S with “a small exhibition” of works made during his time there as he mused on “perception, time and palindromes”. It includes seven paintings, some small sculptures and a window decal, plus SPEAKER events with Tanad Williams and Jaki Irvine on October 16th and 22nd respectively.

Clodagh Emoe: Eternity by the Stars

Illuminations Gallery, Maynooth University, Co Kildare Until November 29th, 2020
Five film works by Clodagh Emoe, all spurred by reflections on our position in an interdependent, interconnected universe. The title is from an 1872 text by Auguste Blanqui, “more than an astrological hypothesis”, a speculation on “the possibility of freedom within an infinite universe.”