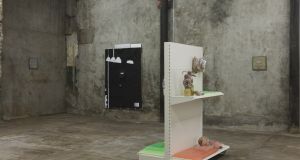 Display, Link and Cure by Sibyl Montague and Glenn Fitzgerald.

The Complex, a suitably ambiguous title for a multi-discipline creative hub, is a perpetual work in progress. There have been reports of the tentative emergence of a fledgling city centre cultural quarter northwest of the Liffey, but if it’s happening, it’s a scattered quarter, and the impetus of current development is towards hotels, to a disconcerting degree. Received opinion has it that bohemians gentrify a neighbourhood and are then edged out by developers. Exhibit A: Temple Bar. It retains a stubborn, substantial core of cultural locations, enabled and to some extent cushioned by rules and regulations, but the economic engine is in essence a travesty of cultural tourism.

Since losing its previous premises just up the road and finding a home in Arran St East, the Complex has been faced with the challenge of transforming several capacious spaces, mostly occupied by cumbersome banana-ripening equipment, into functional units. The main being of course the performance space, plus studios and work spaces, offices, rehearsal room and more. And, not least, a gallery, which has just launched its inaugural show.

Opening a visual arts venue at the moment is going against the grain. Although it did stage good shows, the Complex’s record in its previous home was uneven, largely because for a time it did not seem to have a consistent, reliable programme to build a level of expectation and attendance. This time around there promises to be a more concerted effort, with  curator Mark O’Gorman charged with programming the gallery with Paul McGrane as visual arts coordinator. And, while it is probably fair to say that the artist director Vanessa Fielding’s passion is theatre, she is certainly sympathetic to and an advocate of the visual arts.

O’Gorman and McGrane are focused and keen on the opportunity. Mind you, it’s come at a cost: they’ve been closely involved in dismantling the formidable banana ripening chambers used for many years by Smyths & Co. The process entailed some key decisions. The most important was deciding what kind of space they were aiming for. Broadly speaking, they have at their disposal a very big cube, but as they worked they concluded early on that what they would not do was make it into a white cube, probably the most obvious strategy.

As O’Gorman relates it, the notion of having a white cube sitting in the middle of an area steeped in its own history, with an architectural grain of its own, seemed wrong. More, in the midst of an array of fruit and vegetable warehouses, and adjacent to the now decommissioned fruit and vegetable market, it would have been insulting, they felt, not to acknowledge all of these contextual factors.

So their cube is exceptionally atmospheric, it could even be described as the opposite of a white cube. They mention “a warehouse aesthetic.” Each wall is a patchwork history of alternations and amendments, with openings, arches, doorways built over but residually visible. Obviously in one way it’s a real challenge for artists and curators; you could put things in the space and leave them to their own devices, but they would immediately be seen in relation to the fabric that contains them.

They wondered how artists would feel about that and, as it happens, artist so far feel pretty good about it. They are keen to take into account the fabric of the space. The launch exhibition, Display, Link and Cure explicitly references the history of the building and the wider setting. The artists, Glenn Fitzgerald, Liliane Puthod, Richard Proffitt and Sibyl Montague, all entered into the spirit of the project. With the opening show, they wanted, O’Gorman says, to allow reference to the architectural space, the broader context of the fruit market and, more generally perhaps, ideas relating to “impermanence, the ephemeral, commodification, and material honesty.”

Montague’s contribution is framed as a shop display. Her gelatin “products” suggest an ambivalent sense of ripeness and decay, perishable goods, fleshily ambiguous, on the cusp between attraction and repulsion. O’Gorman and McGrane mention an element of nostalgia as well and note that they had seen her work based on imagery and substance from women’s magazines, a form of hacking, repurposing commodified products to disrupt their consumerist rationale.

Proffitt seems like an ideal choice for the venue, and not because he was likely to do something obvious. Quite the opposite. In fact, he does what he usually does and taps into a kind of opposite, underlying, alternative energy in the place. He is drawn to arcane, esoteric and obsessive thought and belief processes, marshalling diverse items that allow glimpses into forms of extreme subjectivity. If that sounds a bit ominous, it should not. He is an empathetic, interested witness, and has made any number of excellent installations. With very few elements, he does a great job here.

Fitzgerald’s work, like Montague’s, reaches towards the retail functionality of the environment, using materials that evoke the workings of the market and fragmentary images recalling the personalities of the people actually working there day-to-day. In a sense Puthod’s contribution is comparable. Her main piece is, essentially, a fridge. A fridge that she has made. It echoes the banana ripening cabinets that once occupied the space, but is also a more generally emblematic object in the room. She likes to explore a tension between her sources and the more problematic forms that she creates. All four artists contribute to an auspicious beginning for a welcome new venue north of the Liffey (though the show’s run is regrettably brief).

Diarmaid Ferriter: 1920 was a year of violence, trauma and terror in Ireland
7

IRA disappearances during the Irish revolution
9